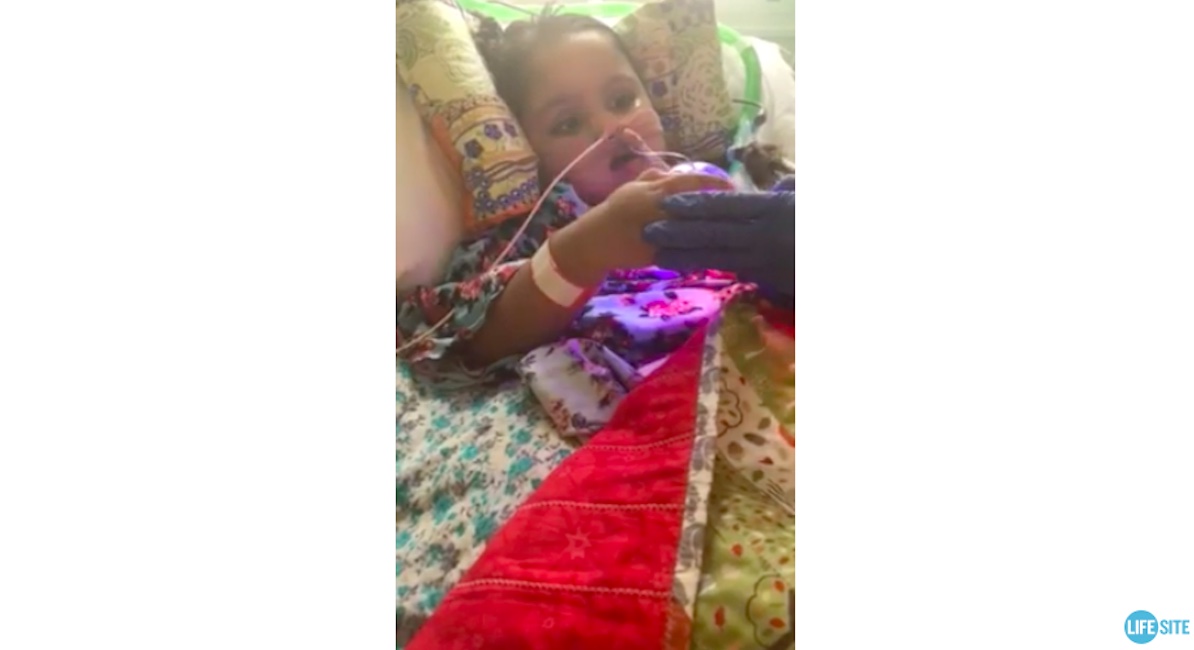 (Life Site News) The parents of a little girl who suffered a sudden stroke are now fighting for her life — against doctors who wish to remove her from life support and let her die.

Tafida Raqeeb, 5, is lying in London’s King’s College Hospital, having suffered a sudden and rare rupture in her brain in February. A brain stem test has shown that she is not dead. Her doctors, however, who are convinced that she will never recover from her minimally conscious state, wish to remove her from a ventilator, thus bringing about her death.

Today, the doctors’ legal representatives went to court to do so.

Tafida’s mother, Shelina Begum, 39, told LifeSiteNews that neither she nor her husband, Mohammad Raqueeb, 45, want this to happen. Believing the little girl is recovering, they have found a hospital that is willing to treat their little girl, the Gaslini Pediatric Hospital in Genoa, and want to take her there.

However, in a situation reminiscent of the Alfie Evans and Charlie Gardcases, Tafida’s London doctors believe it is in her best interests to die.

Video released by the parents show Tafida interacting with an electric globe strobing out different colors. She tracks it with her eyes, blinks, and at one point is helped to hold onto it.

Today, the Daily Mail reported that the “legal battle” between the girl’s parents and hospital had just begun in the Family Division of the High Court.

This is not the first time Tafida’s doctors have been willing to err on the side of death, Shelina Begum told LifeSiteNews in an emailed statement. The mother of two said surgeons did not operate on her child until five hours after the then-four-year-old suffered the stroke and afterward the girl’s medical team repeatedly suggested “end of life” to the distraught parents.

Tafida’s parents were not so quick to despair of their daughter recovering to some extent, and eventually it seemed that the doctors mirrored their hope.

“We started to notice Tafida make little progress, such as opening (her) eyes and (the) movement of limbs. Her stats had also been stable for a long period of time,” Begum said.

“In April, we were transferred to Royal London Hospital with confirmation that Tafida will have a tracheostomy. We were even told that we may be able to go home after a few months and her recovery could continue at home.”

However, the doctors changed their minds after attempts to remove the little girl’s ventilator made her condition worse. Tafida was discovered to have hydrocephalus (water on the brain) and underwent two surgeries to resolve it. Then the doctors dropped the bomb on her parents: they indicated they no longer wished to treat the little girl.

“On Wednesday 19th June 2019, I was informed by the nursing staff that (two specialists)  were coming to the hospital to meet us in half an hour,” Begum recalled.

“No other notice was given to us,” she continued.

“At the meeting, (one doctor) informed us that treatment will be withdrawn and if we don’t agree, the case will be taken to court to obtain an order to terminate her life.”

Four days later, another specialist asked to meet the parents. This one agreed with the decision to withdraw treatment from Tafida and asked where the mum and dad would prefer their little girl to die: at home, at a hospice or at the hospital.

On June 27, the same specialist said that she would tell them on July 1 which day the doctors had decided to turn off the ventilator.

Tafida’s mother asked for an additional week so that her family could spend time with the girl, especially her brother, who was taking his exams that week. According to Begum, the specialist replied that she was a doctor, not a “mummy,” and “sarcastically suggested that he could sit his exams at the hospital.”

“Throughout the past five months, we have been repeatedly told Tafida was dying,” Begum wrote.

“However, she continued to fight for her life. She survived the initial critical period which they said she wouldn’t. She then survived three surgeries and continues to fight. It is only fair that she is given a chance to make a recovery.”

She described Tafida as “an exceptionally bubbly, happy and friendly child who touched the hearts of whoever she met.”

“She was kind, caring and always keen to help others. She was consistently chosen as a ‘helping hand’ monitor at school because of her caring and loving nature,” Begum continued.

“Tafida enjoyed attending school, meeting new people, having stories read to her and role playing. Her favourite (was) being mummy to her friends and cousins.”

The Royal London Hospital, represented by the Barts NHS trust, gave the Daily Mail a statement saying, “Our expert clinicians caring for Tafida Raqeeb have determined, in discussion with additional independent medical experts elsewhere in London, that further invasive medical treatment is futile.”

“As such, we are ensuring that we keep the family involved and uphold Tafida’s best interests, recommending withdrawal of life sustaining treatment and instigating palliative care.”

A Change.org petition asking that Tafida be allowed to go to the hospital of her parents’ choice has been signed by more than 7,000 people.