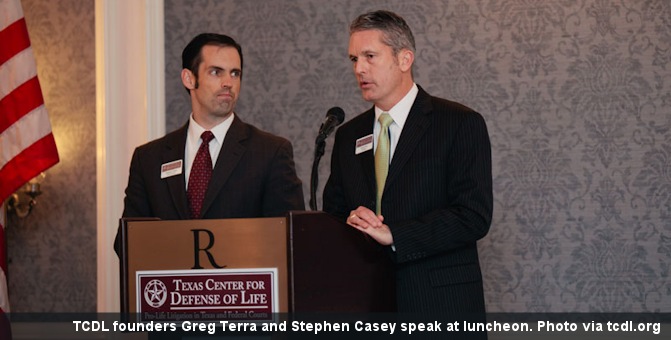 We’ve all heard a lawyer joke or two, but when it comes down to it, most lawyers see their career as a calling. They feel compelled to help others – and the Texas Center for Defense of Life was founded by two such people.

On January 22, 2011, on the 38th anniversary of Roe v. Wade, the U.S. Supreme Court decision legalizing abortion in the United States, Texas Center for Defense of Life (TCDL) was incorporated as a pro-life nonprofit legal organization by Greg Terra and Stephen Casey.

After filing and winning a lawsuit on behalf of a sixteen-year-old Austin, TX girl who was being pressured to abort by her parents, Terra and Casey saw the need for an organization that would be able to help fight for the right to life from conception until natural death. The teen was able to give birth to her baby girl, and Terra and Casey were able to move forward to help others. TCDL’s mission is to “aggressively defend the sanctity of human life in Texas and federal courts from conception through natural death.” They provide pro bono legal representation and support to pro-life organizations and people throughout the state of Texas. While they are nonpartisan, they are affiliated with Alliance Defending Freedom, the largest Christian legal group in the United States.

Since helping the 16-year-old girl to win the right to give birth to her daughter, TCDL has represented a pregnancy resource center in a federal lawsuit against the city of Austin regarding an unconstitutional ordinance meant to harass pregnancy centers, pro-life sidewalk counselors who were being harassed by clinic workers and local police, and a pro-life medical resident being required to perform ultrasounds at Planned Parenthood.

Terra and Casey have also represented the surrogate mother of an unborn baby with Down syndrome who was being pressured to abort the baby by the child’s biological parents, as well as a woman who was told by the hospital that they wouldn’t take any measures to save her premature baby’s life after being born.

In addition to representing people in right-to-life cases, TCDL has also taught a live webinar at ADF national headquarters to train other pro-life lawyers and has appeared in two pro-life documentaries. Terra and Casey speak at pro-life events and have been interviewed by numerous television news stations. When speaking after they won their first victory allowing the 16-year-old girl to give birth, Terra called it a “tremendous victory” saying:

…another life has been saved. Our victory today stands for the principle that ‘choice’ goes both ways. Under Roe v. Wade and post-Roe cases, a teenage girl has the absolute legal right to choose life, even over the strong objections, pressure, and punishments of her parents. We are extremely happy with the outcome today and we are very proud of our teenage client for being strong enough to stand against her parents to save her unborn child’s life.

In the fight to save lives and end abortion, those being pressured to abort their children can now find hope with pro-life legal representation provided for free – not only in Texas, but in other areas of the country as well – thanks to the efforts of Terra and Casey.