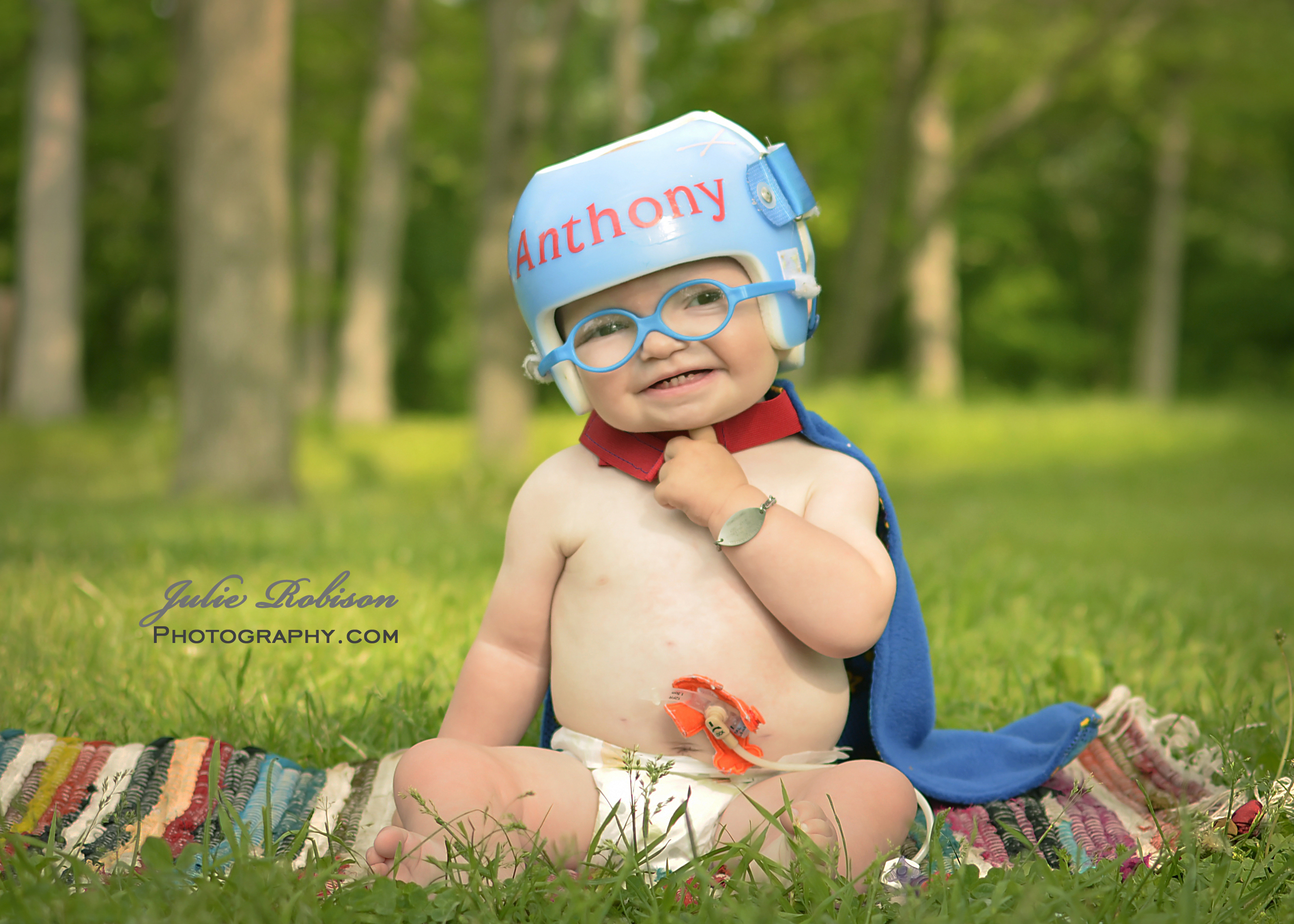 Anthony in his cape.

It started as a hobby. Robyn Rosenberger was working a full-time job in corporate America when she made her first super hero cape for her nephew’s birthday. Then she made a couple more, one for her son and one for his dog. When she began selling the capes on Etsy, she had no idea what the future looked like for her newly discovered talent.

But Rosenberger had stumbled upon a blog called Blessed by Brenna, about a little girl who was born with a severe skin disorder, and this would change everything. Enamored by Brenna’s strength and determination, Rosenberger decided that Brenna needed a cape of her own.

This seemingly small moment and act of generosity was the beginning of TinySuperheroes. Rosenberger calls it a tiny cape company with a super big mission. That mission is to empower kids as they battle illness and disabilities.

The plan is simple: every time someone orders a cape, a second cape is donated to a child with special health needs. The idea took off and after six months of late nights and early mornings, Rosenberger left her job at a software company to focus on TinySuperheroes.

“I either needed to stop sending capes or figure out a way to make capes my living,” she said. “It was the biggest leap of faith I’ve ever taken. Fortunately I have a very supportive husband and we just sort of went for it. I believe that if you’re doing the right thing, that things would work out.”

Things definitely seem to be working out. Since January 2013, Rosenberger has sent out over 6,000 capes. Families visit the company website to either order a cape, nominate a child to receive a cape, or sponsor a child who is on the waiting list for a cape.

But it’s when the child receives the cape that the real fun begins.

“I consider it the beginning of the relationship,” said Rosenberger. “Once they have their cape they are officially in the TinySuperhero Squad. We offer free ‘missions’ and families keep us up to date on appointments and surgeries on our Facebook page.” Over the course of the two years that Rosenberger has been creating capes, she’s had the pleasure of learning about different children and the battles they face. Originally, her intention was to bring a smile to a child’s face, but she saw the families were really clinging to the message that comes with the capes: that you’re strong and courageous and brave.

“There’s something special about wearing a cape,” said Rosenberger. “You feel empowered. And that message really translates when I send these capes. For a lot of the families, the capes put an identity to the journey that they’re on and it validates what they’ve overcome. These kids have defied death and the odds and done things that they shouldn’t have been able to do. So when someone from the outside can say, ‘We see it too’, it just kind of validates that they have done amazing things.”

So many children have touched Rosenberger’s life including Remedy who went through nine months of chemo and radiation after about a dozen tumors were found on her spine. She lost her ability to walk, but all of her tumors are gone. Nine-month-old Blake is waiting for a kidney transplant, and his cape hangs from his crib in the Neonatal Intensive Care Unit.

But there is one child whose story changed how Rosenberger viewed her company and her mission.

“Very early on in this journey, first three months, I never knew what I was walking into,” she said. “I didn’t know what it was like to have a child with a disability. I received an email from a dad that his son had received his cape and had died shortly after and they buried him in his cape. It was a fun hobby that made people feel good, but then I realized there was this need in these families for support. This is the simplest thing ever that I could do. And if I could impact one family in this way, than how can I stop?”

The company has become family affair as Rosenberger, husband Joe and their boys Rory, age three, and Milo, age one, recently relocated to be closer to family. Rory loves his cape and when Milo goes to physical therapy appointments, he bring capes to give to the other children. Rosenberger says that TinySuperheroes has turned her into a better mother because now her children have the opportunity to not see children with illnesses or disabilities as different. Her big vision for the company is to help change the way people think of illness and disability in babies and children.

“Three years ago if I was walking down the street and saw a girl in a wheelchair I would have found myself not really knowing what to do,” said Rosenberger. “We don’t want to offend anybody, so we end up not looking at them and not talking to them. And what happens when there’s a superhero cape on the wheelchair is it breaks that barrier and helps start a conversation. We’re walking around trying to be kind and we’re offending people. Superhero capes break walls. We can see kids’ super powers instead of their differences. That’s what pushes me forward. […] I’m so lucky to have even had the opportunity.”

All too often, a prenatal diagnosis leads to abortion, since living with a disability is often viewed as too difficult and stressful. Little value is placed on the lives of babies who are seen as different. Instead of using that diagosis to learn about the child’s condition and find the best course of action to provide them with the most normal life possible, parents are often pressured to terminate and try again.

TinySuperheroes shows that all children are the same and they all want the same things – love, understanding, kindness, life, and a little bit of fun.