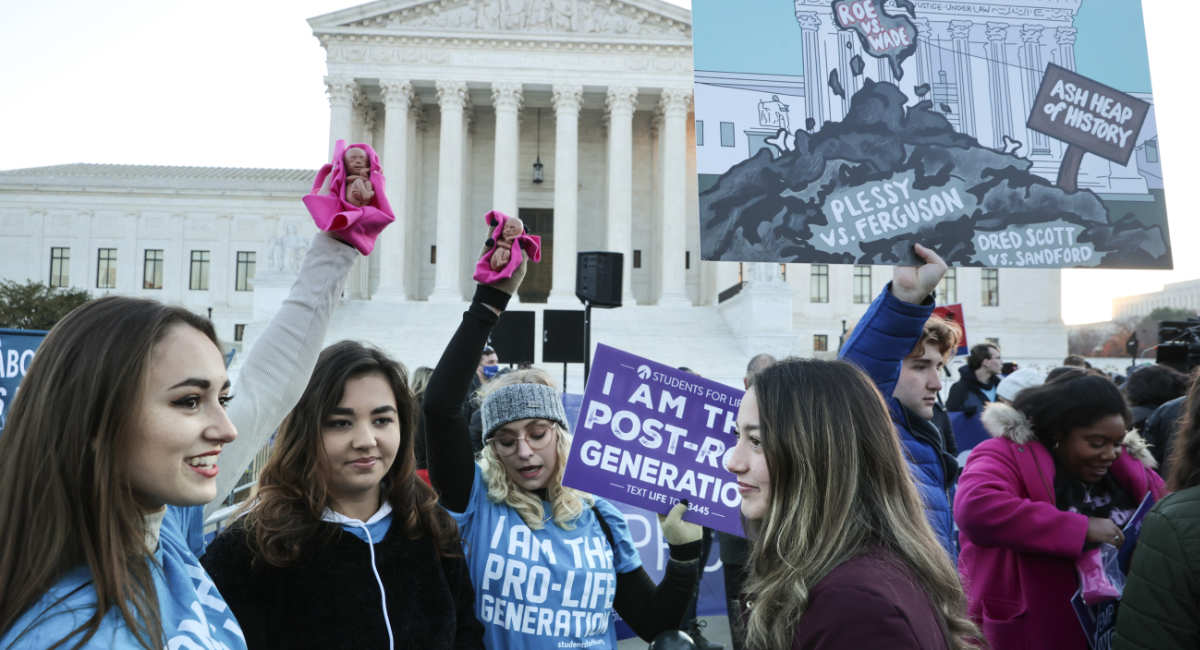 Roe v. Wade is the U.S. Supreme Court’s last standing defining failure. Dobbs v. Jackson Women’s Health places us on the cusp of witnessing Roe’s demise, allowing for true legal protection for all American citizens. For almost 50 years, Americans have been deprived of the ability to protect our youngest brothers and sisters from the violent killing of abortion. Roe contrived that the Constitution provided every woman with a “right to abortion,” a claim that has no basis in the text, history, or traditions of our nation’s governing charter. In the oral arguments held before the Court on December 1st, the fiction of Roe was addressed head-on.

A Move in the Right Direction

When the Court agreed to hear Dobbs, it chose to address the question, “Under the Constitution, may a State prohibit elective abortions before viability?” Since Roe was issued in 1973, and the core holding of that case was supported in 1992 in the case of Planned Parenthood v. Casey, states have been extremely limited in their ability to pass laws that protect preborn life. States have been particularly restricted from protecting children younger than about 24 weeks, a marker commonly used to delineate if a child is “viable” outside of her mother.

The Court’s prohibition to states against passing protective laws has not stopped states from passing laws, in fact, hundreds of laws protecting preborn life have been passed in the last few decades, but unfortunately, these laws have almost never gone into effect. If a state passes a law that the Court says violates their abortion jurisprudence, lower courts will enjoin the law from being enforced. When the Court chose to hear Dobbs, Mississippi’s law protecting children from abortion beginning at 15 weeks gestation had already been put on hold by a lower court. Mississippi’s Attorney General then requested the Supreme Court hear the case — a request made by dozens of states every year which are usually uniformly denied. This request was accepted. Why?

The fact that the Court agreed to hear the case in the first place indicates that it is ready to issue a change in abortion-related decisions. If the Court intended to strike down Mississippi’s law and reaffirm Roe v. Wade, it could have accomplished that by refusing to grant the request for a hearing. The Court’s hearing of the case gives a strong indication that at the very least the Court intends to uphold the constitutional validity of Mississippi’s 15-week protection. That is the baseline, and should not satisfy Americans concerned with protecting the human rights of all Americans. To examine whether the Court has the boldness to go all the way and repeal Roe v. Wade, let’s look at what happened during the oral arguments.

The oral arguments went extremely well for the pro-life side. The Justices’s questions made clear that six lean strongly toward upholding the constitutionality of Mississippi’s law. Examining some lines of questioning, in particular, can illuminate whether the Court will overrule Roe and Casey completely.

For an opinion to rule, five justices of the nine on the Court must sign on to it. On the current Court, three Justices have made their pro-abortion stance clear and continued to advocate for that view during oral arguments: Breyer, Kagan, and  Sotomayor. The other six indicated they would choose to uphold Mississippi’s law, but it is unclear how they may vote on overturning Roe in totality.

Justice Clarence Thomas is the strongest advocate for a proper understanding of our Constitution’s protections for human life on the Court. He began oral arguments by pointing out the truth in a question to Mississippi Solicitor General Scott Stewart, asking, “You say that [abortion] is the only constitutional right that involves the taking of a life. What difference does that make in your analysis?” Justice Thomas has already ruled once to overrule Roe in the minority opinion in Planned Parenthood v. Casey (1992). We can be confident that he will be a strong vote once more to overturn Roe.

Justice Samuel Alito drew comparisons between Roe and other egregiously wrong decisions in the Supreme Court’s past, including Plessy v. Ferguson, which had enshrined racial discrimination before it was overturned in Brown v. The Board of Education. Justice Alito asked the Solicitor General of the United States Elizabeth Prelogar, who advocated against Mississippi’s law, “Is it your argument that a case can never be overruled simply because it was egregiously wrong?” Signaling that Roe may be “egregiously wrong” puts Justice Alito in the overturn Roe camp.

Justice Neil Gorsuch has had few opportunities to rule or opine on abortion law, but his questioning boded well for the potential to overturn Roe. He asked similar questions to both the pro-life and anti-life advocates, surrounding whether the Court could conceivably uphold Mississippi’s law without striking down Roe, saying, “If this Court will reject the viability line, do you see any other intelligible principle that the Court could choose?” Both sides said that without the viability standard, Roe would be unworkable. This was an important line of questioning that drew out the absurdity of the “middle” option of upholding the 15-week law but also upholding Roe. Justice Gorsuch’s questioning demonstrated that if Mississippi’s law is upheld, Roe must be overturned.

Justice Brett Kavanaugh focused on his perception of the Constitution’s neutrality on the issue of abortion. We will look at this more in-depth when we examine the 14th Amendment’s role in this case, but Justice Kavanaugh’s defense of the neutrality of the Constitution when it comes to abortion is incompatible with upholding Roe.

Justice Amy Coney Barrett strikingly asked about the idea of stare decisis, which means to stand by things decided. “And I think a lot of the colloquy you’ve had with all of us has been about the benefits of stare decisis, which I don’t think anyone disputes,” she said, “and, of course, no one can dispute because it’s part of our stare decisis doctrine that it’s not an inexorable command and that there are some circumstances in which overruling is possible. You know, we have Plessy, Brown. We have Bowers versus Hardwick, to Lawrence.” Plessy enshrined racial segregation and was later overturned, Hardwick upheld the criminalization of same-sex relations and was also later overturned. By placing Roe in a similar category to the aforementioned landmark decisions it appears Justice Barrett is leaning towards overturning Roe.

That leaves us with Chief Justice John Roberts, who is known for placing a high value on institutional legitimacy and popular support for the Court in his decision-making. In this case, Justice Roberts harshly questioned the viability standard, indicating possible approval of Mississippi’s law, but seemed hesitant to throw out Roe altogether. He even made this comparison: “When you get to the viability standard, we share that standard with the People’s Republic of China and North Korea. And I don’t think you have to be in favor of looking to international law to set our constitutional standards to be concerned if those [nations] share that particular time period.” Chief Justice Roberts seems likely to uphold Mississippi’s law, but it is unclear how he will rule on Roe itself.

READ: A diverse pro-life movement rallied at Supreme Court: ‘Anyone can be pro-life, and everyone should be’

Mississippi Solicitor General Scott Stewart concluded his argument powerfully, saying, “In closing, I would say that in his dissent in Plessy v. Ferguson, Justice Harlan emphasized that there is no caste system here. The humblest in our country is the pure, the most powerful. Our Constitution neither knows nor tolerates distinctions on the basis of race. It took 58 years for this Court to recognize the truth of those realities in a decision, and that was the greatest decision that this Court ever reached. We’re running on 50 years of Roe. It is an egregiously wrong decision that has inflicted tremendous damage on our country and will continue to do so and take innumerable human lives unless and until this Court overrules it.”

While predicting the final machinations of the Supreme Court is challenging, we can be confident that the Court will uphold the Mississippi protection, and optimistic that it will overturn Roe. Ultimately, there appear to be five solid votes to overturn Roe, counting Justices Thomas, Alito, Gorsuch, Kavanaugh, & Barrett. Chief Justice Roberts could concur in upholding Mississippi’s law but not going as far to strike down Roe, and the final three Justices should be expected to write in dissent. If there are indeed at least five votes to overturn Roe, Americans will have the first opportunity in almost 50 years to legally protect their youngest citizens.

True Citizenship Under the 14th Amendment

We should be optimistic about the potential reversal of Roe and her constitutional progeny. For five decades states have been prevented from protecting preborn children in their jurisdictions, and sending the issue of abortion back to the states will save thousands while removing a grave black mark on our judicial system. But that is not enough.

In a post-Roe world, we know that some big and powerful states like California and New York will not only have a legal abortion, but will subsidize and incentivize the horrific act. Our nation will have “abortion sanctuaries,” states that will even pay out-of-state mothers to come and seek the intentional deaths of their own preborn children. Overturning Roe will be a true generational victory, but we also must keep our eyes long-term on the pursuit of the true application of our constitutional rights to preborn Americans nationwide.

During oral argument in Dobbs, Justice Kavanaugh said, “And I think they also then continue, because the Constitution is neutral, that this Court should be scrupulously neutral on the question of abortion, neither pro-choice nor pro-life, but, because, they say, the Constitution doesn’t give us the authority, we should leave it to the states  and we should be scrupulously neutral on the question and that they are saying here, I think, that we should return to a position of neutrality on that contentious social issue rather than continuing to pick sides on that issue.” This statement indicates strongly that Justice Kavanaugh could vote to overturn Roe. But the truth is the U.S. Constitution is not neutral on abortion. Our Constitution affirmatively guarantees all Americans — regardless of age, size, or location — equal protection and due process under the law. That must include the right to be born and live.

The 14th Amendment properly understood protects preborn Americans from intentional killing. Overturning Roe will be a critical victory in the fight to protect human life. But we must fight in every state legislature across our nation to protect our children, and we must begin vetting judicial nominees on the basis of their understanding and commitment to the human right to life as protected by the 14th Amendment.

Americans who respect life should be encouraged, and ready to vigorously fight on behalf of the most vulnerable in our society like never before.