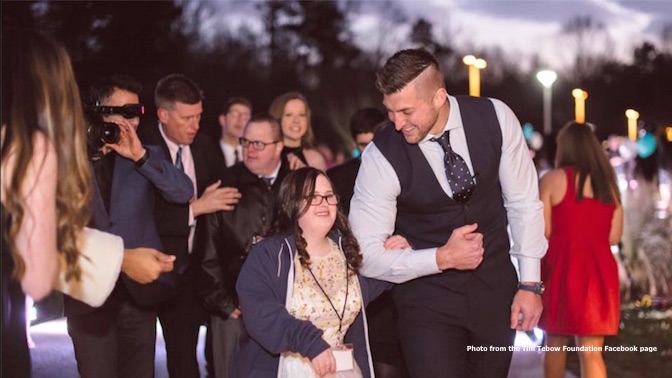 In a world that routinely treats people with disabilities as a group that must be eliminated, it is refreshing to see someone who acknowledges that everyone has value and dignity.

Tim Tebow is one of those people. Notorious for his devout Christian faith, he has been an outspoken advocate for life – including his commitment to celebrating people with special needs. He created his foundation, the Tim Tebow Foundation, with the goal of bringing faith, hope, and love “to those needing a brighter day in their darkest hour of need.” From caring for orphans around the world to building playrooms for sick children in hospitals, the Tim Tebow Foundation is devoted to giving back, and one of the most amazing programs they offer is the Night to Shine.

On Friday night, Tebow helped give thousands of people with disabilities and special needs an incredible prom night experience.

According to Tebow, he got the idea when he was living in the Philippines. “My inspiration was when I was 15 years old, and I was at a school in a remote village in the Philippines,” he said. “And there was a boy who was shunned out of the event, because his feet were on backwards.”

Tim wanted to do something to celebrate people like this boy, to fight for them and love them, and do something that shows them they, too, are special. He wanted to have an event that told them their lives matter, and would give them “the night of their life.”

Tim held his first event in 2015. It was a success, but less than 50 churches participated. This year, however, the event exploded. Over 200 countries around the world hosted a “Night to Shine” event, with over 70,000 volunteers working hard to give 30,000 guests a prom night they would never forget. And they all took place on the same night at every single location around the world: Friday, February 12.

Guests got the celebrity treatment, complete with a red carpet, cheering crowds, and “paparazzi”. Once they got inside, they were treated to hair and makeup, shoe shining stations, and either a corsage or a boutonniere. There was karaoke and dancing, and every single guest was crowned king or queen. Judging from the pictures and videos, it was a night they would never forget:

#NightToShine What a night… God is SO good!

Words cannot describe the amazing moment with this gorgeous Queen… #NightToShine Check out our live streams all night at www.timtebowfoundation.org/index.php/stand-with-night-to-shine

No question about it… this is our favorite version of Frozen’s “Let it Go” from a real Queen! Karaoke is just getting underway at #NightToShine at Crossroads Christian in Corona, CA!

Karaoke time is certainly one of our favorite moments thus far from Genesis Church in Tallahassee! #NightToShine is…

Seeing the smiles on the faces of these people will surely touch thousands of hearts around the world. Not only do the guests at the Night to Shine get to feel like a king or a queen for one fantastic night, but their stories and beauty will also raise awareness of the unique value that every person intrinsically holds.