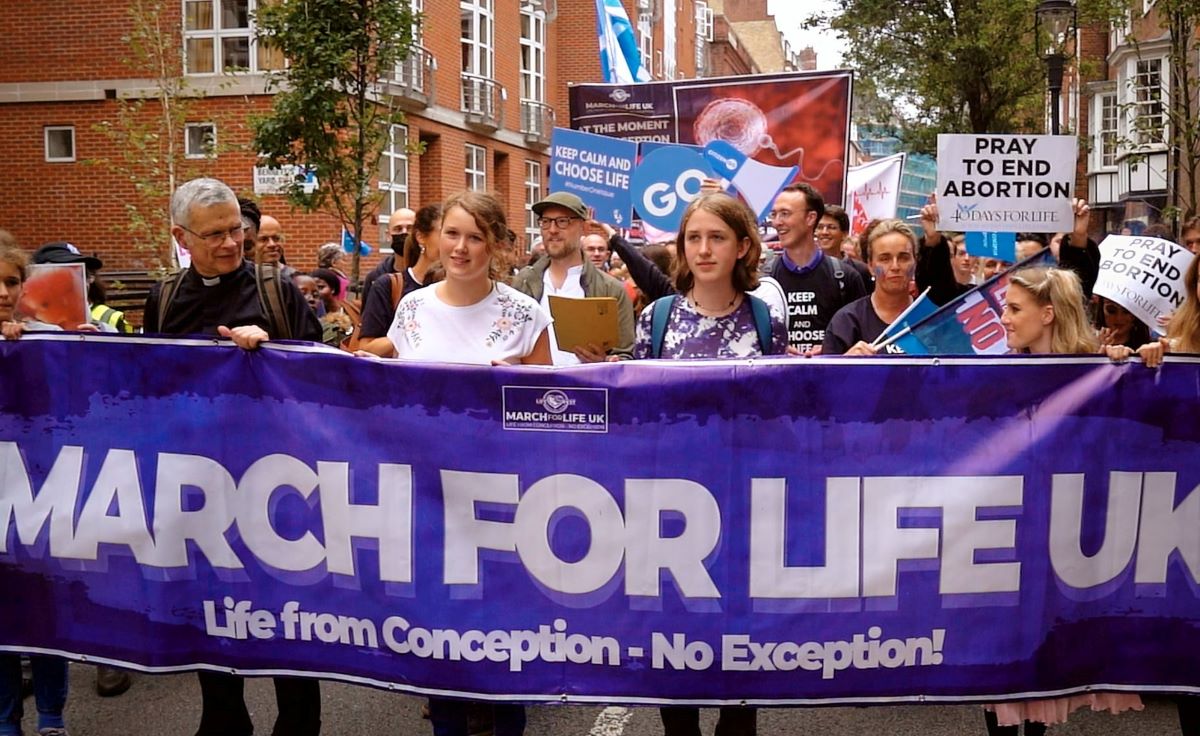 (Right to Life UK) Thousands joined the first in-person March for Life UK since May 2019 this Saturday.

Thousands also took part in March for Life UK’s online Lifestream 21 event last June after the annual in-person march was cancelled due to the COVID-19 pandemic.

In 2019, almost 5,000 people gathered outside the UK Parliament in London.

‘LifeFest 21’ took place from 10:00 until 13:00 inside the Emmanuel Centre in Westminster. The event included testimonies, live Q&As, and workshops from leading pro-life speakers as well as short films and music.

The morning ended with various speakers including a mother named Barbara who considered an abortion 16 years ago. She brought along her 16-year-old son, who she described as ‘the best thing that ever happened to me.’ At the end of his mother’s speech he spoke into the microphone and said ‘My mum is the greatest and I’m happy to be here.’

The march itself began from behind The Emmanuel Centre at 13:30 and finished in Parliament Square, where a stage was set up for public speeches and testimonies.

According to The Socialist Worker, around 40 pro-abortion demonstrators stood on the edge of Parliament Square, shouting slogans such as “Pro-life? That’s a lie. You don’t care if women die,” and singing pro-abortion songs.

The final speeches in Parliament Square included a range of moving testimonies, including one from a young woman who gave an emotional speech about the physical and psychological pain she experienced after being pressured into an at-home medical abortion.

She said: “I killed my baby in the ‘comfort’ of my own home […] Can someone please explain to me how that was comfortable?” She also explained some of the health risks of ‘DIY’ abortion, explaining: “There are people receiving these pills with no face-to-face assessment and no scan […] how is this safe?”.

Before COVID-19 caused many parts of the world to go into ‘lockdown’, pro-life demonstrations were seeing record attendance numbers.

In 2019, over 50,000 Slovakians called on the country’s leaders to protect unborn babies.

Pro-life demonstrations in Northern Ireland have seen numbers reach over 20,000 people, while over 11,000 marched for life in the Netherlands, and over 2,000 people attended New Zealand’s March for Life.

As some COVID-19 restrictions have been lifted in certain areas, there have been many well-attended pro-life events.

In May, thousands of pro-life activists took to the streets of Rome for the 10th Marcia per la Vita (March for Life), with many more watching via livestream.

During the same month, thousands of pro-lifers rallied in the Croatian capital of Zagreb ahead of local and mayoral elections.

Luka Hudincec, one of the rally’s organisers, told reporters: “It’s our duty to advocate for protection of every human life, including unborn children.” He also emphasised that the march sought to demonstrate on behalf of the elderly against possible euthanasia.

Another Hod Za Život (walk for life) also took place in the southern town of Imotski on the same day – the first time a rally of this kind was held in the town.

In March, over 2,400 vehicles participated in the Dominican Republic’s “March for Life” in protest to the proposed introduction of abortion into the country.

A spokesperson for Right To Life UK, Catherine Robinson, said: “It was wonderful to see so many enthusiastic pro-lifers, many of them young people, take to the streets at such a critical time for the UK and the world, as abortion campaigners have exploited the pandemic to introduce extreme changes to abortion provision in the UK and overseas. The pro-life movement depends on those people who are willing to publicly and courageously demonstrate their values.”