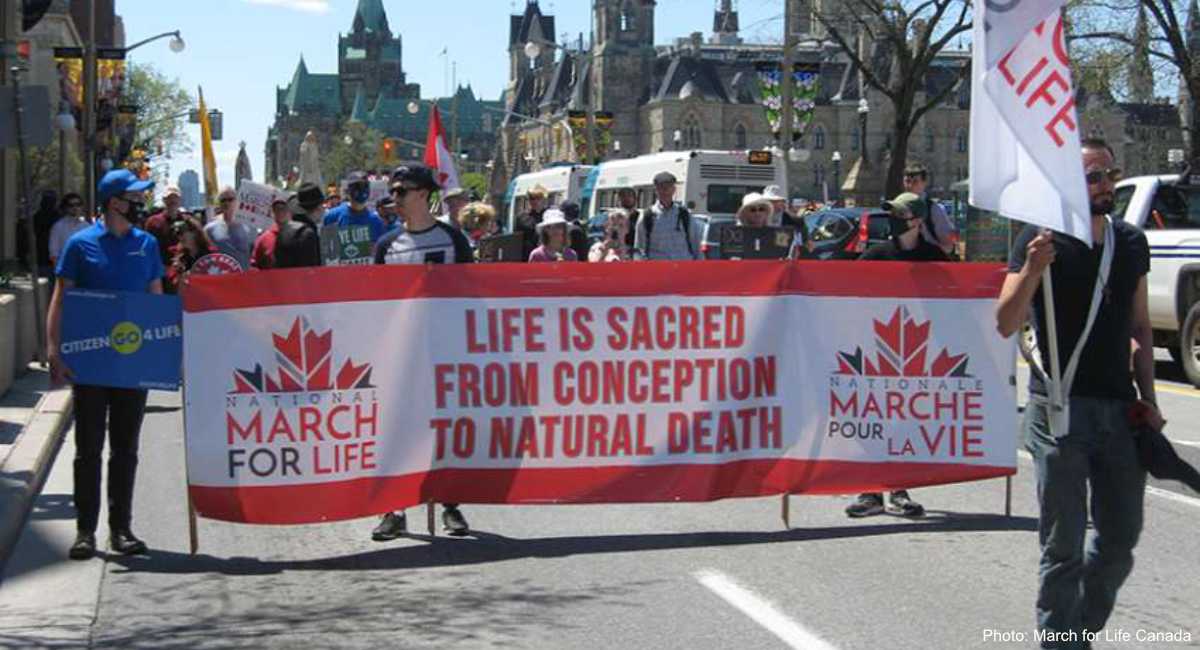 Canada’s annual March for Life was held in-person this year on Thursday, May 13, after being held virtually in 2020 due to the COVID-19 pandemic. Hundreds marched through the streets of Ottawa as thousands more watched online, according to the Catholic Register. At the March’s end, 300 red roses were laid at the Centennial Flame monument on Parliament Hill in a visual homage to the 300 lives lost daily to abortion in the country of 38 million people, amounting to over 100,000 abortions annually.

Speakers repeatedly emphasized the growing impact of abortion and assisted suicide in Canada each year. Ontario’s Deputy State Knight in the Knights of Columbus addressed the tragedy of assisted suicide, saying, “Freedom..they talk about autonomy. It’s a lie…it’s about killing people at the most vulnerable time of their life. That’s what’s happening, that’s what it’s about. It’s about denying proper care, it’s about abandoning people at their time of need.”

Tragically, “each day more than 15 vulnerable Canadians are killed by euthanasia or assisted suicide,” according to the March.

Canada’s own official statistics reported 83,576 in-hospital or in-clinic abortions in 2019, without apparent reference to statistics on the abortion pill regimen which is dispensed with a prescription for at-home use. According to official statistics for assisted suicide, known as “medical aid in dying,” 5,631 Canadians died this way in 2019, with significant year-over-year increases noted since its legalization in 2016.

The state of Ontario is under an ongoing stay-at-home order, yet marchers and speakers noted that abortion has been  considered a protected “essential service” during the pandemic, necessitating the need for peaceful pro-life protest. March organizer Debbie Duval of the Campaign for Life Coalition Ottawa told the Catholic Register, “They [the abortion industry] have not stopped, so why would we? Nothing is more essential than life.”

Pro-life politicians were largely absent from Canada’s March, with the sole exception being MP Derek Sloan. The leader of the Christian Heritage Party, Rod Taylor, also addressed the crowds.

While speakers directly addressed Canada’s sobering abortion and assisted suicide statistics, celebrating the beauty of human life was ultimately the order of the day. One mother received pro-life support to continue her pregnancy reiterated this year’s March theme, ‘You Are Not Alone.”

“To my own baby boy who is well on his way, I promise — you are not alone. Like every child rightly deserves, Mommy is here to protect you, to love you, to say with the love of a mother, ‘I am here.’ You are not a right, you are not a choice, and you are not something ‘un-human.’ You were perfectly and wonderfully made by a God who sees you in His image and in His likeness, and together with your dad and big brother, we promise you so many things.”