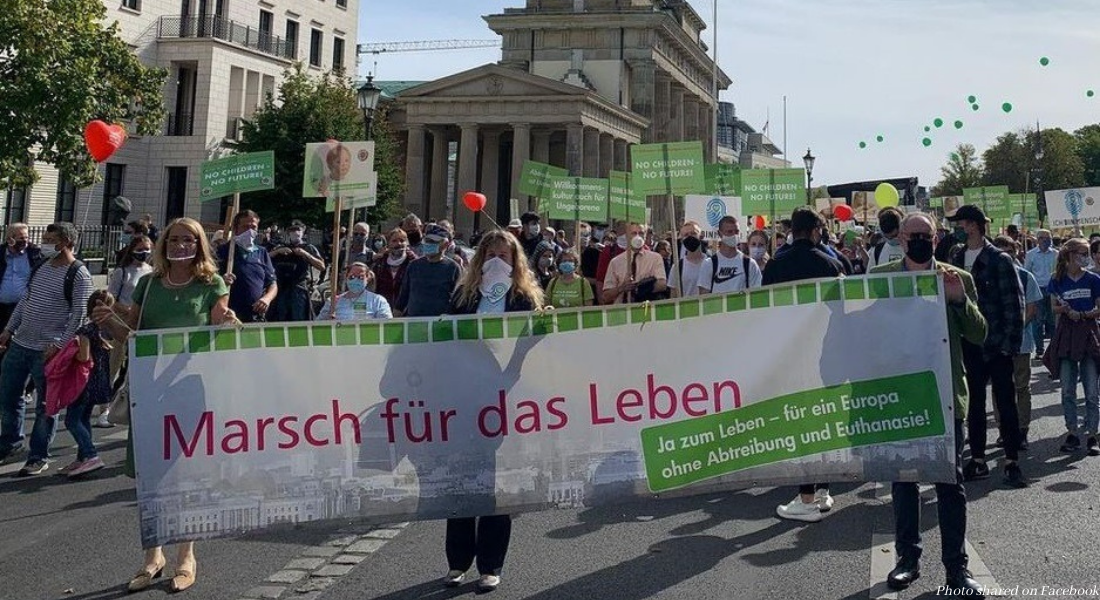 Thousands of people joined the Marches for Life on September 18, 2021, in Switzerland and Germany, despite efforts from abortion activists to disrupt the events in both countries.

In Berlin, around 4,500 marchers met at the Brandenburg Door for their 17th march, carrying balloons, crosses, and banners to demonstrate against abortion and euthanasia. Multiple speakers addressed the marchers, urging that “all children are made in the image of God,” while another speaker added that “the killing of children should never become a human right.” Participants also held a moment of silence in remembrance of those who lost their lives to abortion.

Despite the peaceful march, counter-protesters tried to disrupt the march with loud music, though an estimated 1,000 police officers kept them separated. Still, the protests at the March for Life in Berlin are known to be intense; one woman, Carrie Beliles, described her previous experience, and how dedicated abortion activists were to disrupting them.

“Unlike pro-life marches in the States, the March is extremely intense in Berlin,” she wrote. “The counter-protesters were chanting things like, ‘If Mary would’ve had an abortion you wouldn’t be bothering us now,’ and, ‘If you had been aborted we wouldn’t be bothered.’ Before we started to march, the organizers asked us to remain quiet, and not to dignify the protesters with a response. The counter-protesters came equipped with whistles, which they constantly blew to try and distract us from hearing the speakers at the beginning of the march. They continued to try and drown out our singing or speaking with shrill whistles as the march got underway.”

READ: Thousands turn out for annual March for Life UK

An estimated 1,400 people joined the march in Zurich, Switzerland. As in Germany, however, the pro-life marchers faced attacks and attempted disruptions. According to Catholic News World, abortion activists were busy the night before, putting barricades in place in an attempt to prevent the march from taking place, and vandalizing the offices of the Swiss Evangelical Alliance, the Alliance Pro Life, and the Foundation Future CH.

Still, the abortion activists couldn’t stop the march from taking place. Marchers carried colorful balloons and played worship music. Leaders from March for Life groups in Argentina, Canada, the United States, and Germany recorded messages telling the pro-life group that they were standing in solidarity with them against abortion.

Marc Jost, Secretary General of the Swiss Evangelical Alliance, also said they would not be intimidated by the efforts of pro-abortion extremists. “It is no longer a matter of course to be able to express yourself freely in Switzerland without being affected by hatred and vandalism,” he said. “We are concerned about this cultural change. However, we do not allow ourselves to be restricted in our socio-political engagement by this criminal minority.”

Valais National Councilor Benjamin Roduit also had an encouraging message. “We march for the weakest, most promising human being: for the child in the womb!” he said, and referring to the country’s constitution, added, “The strength of the people is measured against the well-being of the weak.”