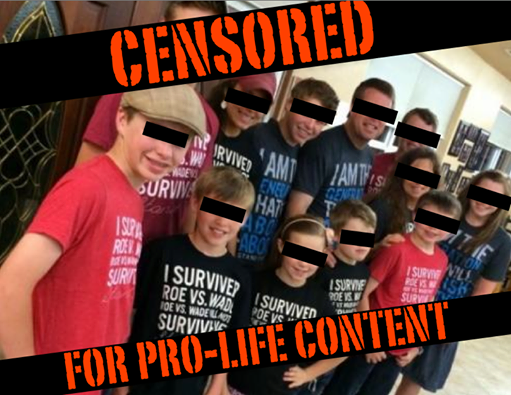 Viewers can probably guess where the stars of 19 Kids and Counting stand on abortion. Heck, you could probably figure that out from just reading the title of TLC’s hit show. But for some reason, TLC thinks pro-life speech is too offensive for their audience to handle.

In the past, the Duggar kids have worn Stand True’s pro-life t-shirts on the show which simply say “I survived Roe v. Wade, but Roe v. Wade will not survive me.”

But on a recent episode, the shirt was blurred out on the program. Can you believe it? A simple statement of opposition to Roe v. Wade was deemed too offensive for viewers of the show to handle. 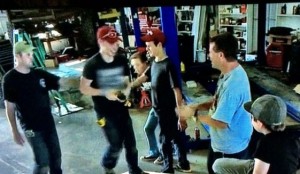 Of course, as a private corporation TLC has the right to practice censorship on its network. But that doesn’t mean it’s a good thing! The network should hear from its pro-life viewers that we won’t tolerate censorship of pro-life statements.

Thankfully, tens of thousands of pro-life viewers have spoken out against TLC’s censorship of pro-life speech. At the time this article was published, a petition hosted by Personhood USA on the CitizenGO platform had gathered more than 17,000 signers. For each petition signature, a personalized email is sent to the TLC network’s viewer relations desk, asking them to stop censoring pro-life speech.

The Duggars are heroes for giving a voice to the voiceless on their television platform. Each week, they reach more than 2 million television viewers through their show on TLC. That’s a massive audience to reach on the subject of abortion! What better way to spread awareness about the killing of unborn children?

Just this month, Jessa Duggar was so inspired by her visit to the Holocaust Museum that she posted an Instagram update condemning “the belief that some human beings are ‘not fit to live.’ So they’re murdered. Slaughtered. Kids with Down syndrome or other disabilities. The sickly. The elderly.” She continued, “The sanctity of human life varies not in sickness or health, poverty or wealth, elderly or pre-born, little or lots of melanin [making you darker or lighter skinned], or any other factor.”

She was struck by the similarities between the systematic extermination of Jews in NAZI Germany and the extermination of unborn children in the womb through legalized abortion, after she visited the Holocaust Museum in Washington D.C.

“The sanctity of human life varies not in sickness or health, poverty or wealth, elderly or pre-born, little or lots of melanin [making you darker or lighter skinned], or any other factor,” Jessa continued.

Now is the time to stand with the Duggar family and stop discrimination against pro-life views on television. If you haven’t already, sign the petition to TLC asking them to stop censoring pro-life speech.