Abortion: killing one, wounding everyone left behind. 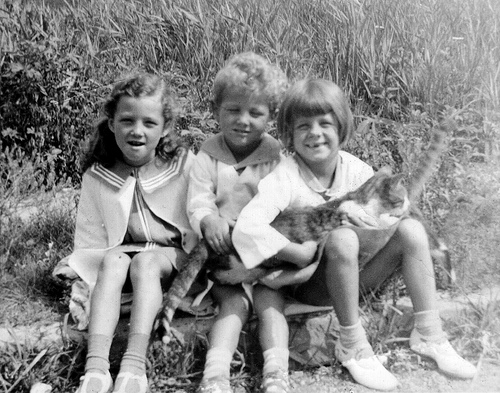 Siblings are meant to be together. (Photo credit: TimothyJ on Flickr)

It can be a very strange thought to wonder why you were chosen to live while your brother or sister was chosen for death. Why did you survive? What would your sibling have been like, acted like, looked like? Would he or she have resembled you? Become your best friend? Years of memories you should have had were wiped out before you ever knew that your brother or sister should have existed. Indeed, abortion is anything but simple for the brothers and sisters of aborted children.

Barb, who has worked with the AAA Center for Pregnancy Counseling for nearly thirty years, writes this:

Abortion teaches children that they have worth because they were conceived in the right conditions and at the right time; that they have value because their parents want them. Up to 50% of all American children have lost a brother or a sister to abortion, making it much more likely that they live with a performance view of love: I was born because I was wanted therefore I better perform so they will continue to love me.

Barb also talks about the reality of survivor’s guilt among siblings of aborted children and about the horrors of selective reduction, in which one or more babies in a multiple pregnancy (twins, triplets, quadruplets) are selected for death and aborted while the rest are allowed to live. Mark I. Evans, a doctor known for doing selective reductions, explains the heartache from his own perspective. Imagine the thoughts of surviving siblings once they discover what happened to their brothers or sisters, right next to them in the womb:

Angie (not her real name) is the sister of two aborted children. She was the oldest child and the only girl allowed to be born. Her only full biological sibling was aborted in a back-alley procedure, just a few short years after Angie’s birth. Angie’s mother then went on to have two sons – Angie’s half-brothers. They were five and nine years younger than her. When Angie’s mother got pregnant for the last time, she decided she was too tired to have a fourth child. So she flew to New York, where elective abortion was legal at the time, and aborted Angie’s last sibling.

The siblings of aborted children sometimes find it hard to deal with their trauma. (Photo credit: James Dennes on Flickr)

Angie will always have to wonder why she was allowed to live when her brother or sister was subjected to a crude back-alley death. Would she have ever had a sister? Would her real father have been able to stay in her life if her full brother or sister had lived? What would it have been like to have had a sibling close in age to her; to grow up with as a friend? Would she have been a second mother to her youngest sibling, just like she was to her youngest living brother? What made the difference? Why was she saved, when others died?

While Angie may never get all of her answers, it’s important that she – and other men and women like her – find an outlet for their painful questions. There are several wonderful healing ministries for men and women who have experienced abortion, but it’s much harder to find a support group for siblings of aborted babies.

Renee – an oldest daughter just like Angie – shares these sentiments on her blog, Surviving Sibling. She writes about her very personal story – her struggle with her brother’s untimely death, her love for her mother, and both her and her mother’s decisions to get involved in the pro-life movement.

Apparently she chose that night [the night of her mother’s abortion], because going out, then, would not likely arouse suspicion. Years later it brought me such pain to think that that night before she left, when I gave her a hug, I also hugged my little brother inside, but the next time I hugged her, it was just her alone. L How sad she must have been. And how innocent and unaware I was. …

For a while after finding out, I had such a deep sadness that I could not identify at first. I felt like I did when I lost one of my nursing home friends, but nobody had recently died. What was up? Then I realized it was my brother. I was grieving the loss of a little sibling, that up until then had not existed (that I was aware of). How strange. How could I possibly feel so strongly for someone I never met, or even knew about? As I mentioned before, I am not an emotional person, so these feelings were extra unappreciated. I felt stupid for grieving 11 years later. He was long gone, I shouldn’t feel anything. But, that’s not how it works. Over time, I felt that sadness less frequently, but still, 6 years later I feel twinges at times. I have also, at times, felt completely at peace with our situation, and at other times, have seriously forgotten about him. That, I believe, is often a defense mechanism.

Renee has decided to reach out to other siblings of aborted children through her blog and through two Facebook groups she’s created: Abortion Hurts Siblings and Others and a “secret” group called “I Lost a Sibling to Abortion.” If you are suffering from the loss of a sibling through abortion – or still processing it – check out Renee’s blog and Facebook groups. Losing a sibling through abortion is a legitimate cause for grief and pain, and it’s important to find healing as much as possible.

We must admit that abortion causes only suffering for the brothers and sisters of an aborted child – whether they come before or after the abortion. As Barb says:

I think one of the most difficult things for me to face is a woman who is attempting to justify an abortion for the sake of her other children. I always want to tell them…the best thing for her little ones is to have a brother or a sister. In fact, explaining to sons and daughters a few years in the future as to why they aborted their sibling will probably be the most difficult thing they will ever do[.]