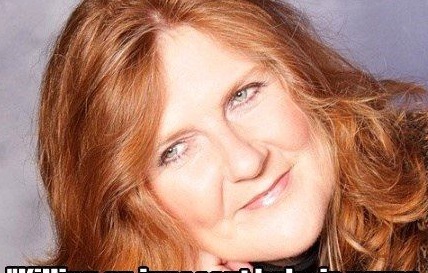 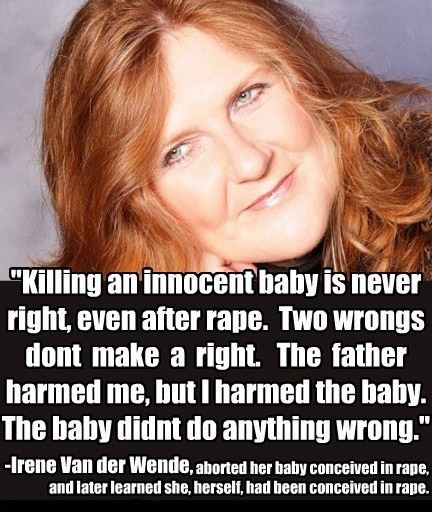 “When I was younger, there was a man who wanted something from me that I was not willing to give,” says Irene van der Wende. She was in her twenties when a man attacked her. Though she attempted to escape his grasp, he began to strangle her. Her will to live kicked in and she knew, as she struggled to breathe, that fighting may cost her life.

After he raped her, Irene walked away, clutching her coat and hoping no one could see her ripped clothing underneath. Time passed, and Irene discovered she was pregnant.

“I could no longer close my skirt zipper,” she explains, “When my doctor informed me that I was pregnant, I was in shock. It felt as though the legs had been sawn off from under my chair, as if I was falling into a deep abyss. In a whirlwind of events, I ended up in an abortion clinic, but the counselor said I was too far along. I was on the verge of it being allowed to be done legally.”

Because of her late gestation, Irene was sent to a different clinic:

I will never forget the sound of the old creaking heavy wooden door, the black and white checkered tiles, and as I was waiting to sign papers, I watched the big clock at the far end of the room, the minutes ticking away to the death of my child. There was an ominous atmosphere, as if death hung in a cloud in the air. I was petrified. The imprints, the sounds, the images, stay with me to this day. In a side room, with some six other women…waiting for our turn, the women were laughing and giggling, and asking each other why they were having it done. …

I started thinking about my situation. I realized I was a mother, with a baby inside me, regardless of how she got there. But when I said this to the nurse who came to collect me, she patted me on the shoulder and said, ‘There there now. You all say that at the last minute – you’re doing the right thing’.

Irene, fearful and second-guessing her decision to abort, was not prepared for the horror that happened next. No one could be…

The abortionist started yelling at me, and I froze…in sheer panic and terror. … With feet in the stirrups, legs tied, and arms outstretched, also tied, I felt like we were sheep about to be slaughtered. Already having gone through rape, this was horrendous. This is what women’s lib thought was okay? I lost consciousness and awoke to now be the mother of a dead baby, a nightmare that would follow me the rest of my life. The pain was horrendous. The women who had been so chirpy at first, were now all groaning and in tears and crying out to God to forgive them, others crying out ‘my baby!’ while others cried that they were so sorry.

Irene tried to bury her emotions and says she spent a long time living in denial. However, each Mother’s Day was a painful reminder that she had carried a baby who was no longer here. Then she learned that she was also conceived in rape. Her father had been drunk and beaten and raped her mother.

“That is how my life started,” says Irene, “but society says that is a reason to kill me, simply because I was not conceived in love with wine and roses. … That doesn’t make sense from where I am standing.”

Irene is grateful to the politicians who believe all lives are valuable and worth protecting, even those conceived in rape. Her own mother planned out her suicide while she was pregnant with Irene, even heading to the train tracks to jump in front of an oncoming train before changing her mind. Irene is grateful to be alive and able to do something with her life. However, this gratitude for life reminds her that her daughter wasn’t given the same chance. She explains:

It is a sore realization that I did not give my daughter that opportunity. I wish I could turn the clock back, but of course I can’t. But I can now help educate. I often would think how old she would have been now, but couldn’t handle the emotions, so I would stuff it further. When I eventually was able to forgive the rapist, I found it difficult to forgive myself for what I had done. The father (rapist) harmed me, but I harmed my own baby – she was my own flesh and blood.

Down the road, Irene became pregnant again,but her boyfriend insisted she have an abortion. Irene refused, and her boyfriend abandoned her. Unfortunately, Irene miscarried. Since then, she has named each of her deceased daughters and created a grave for them. After making models of each of them, she buried them with marble Bibles and a stone to commemorate their lives. This has helped her to heal.

A few years went by, and Irene took a trip to Israel where she happened to meet a group of pro-life leaders. Certain they would each be able to tell that she had had an abortion simply by looking at her, Irene wanted to hide. She says she was feeling guilty and ashamed.

When the group overlooked the Hinnom Valley in Jerusalem, where innocent babies were sacrificed to the god Molech, I was totally convicted and could do nothing other than cry out…for forgiveness for killing one of [God’s] children. I also cried out on behalf of all the women in the world who killed their children, begging for forgiveness for what we were doing, amongst immense sobs from deep in my innermost being.

When she returned home, Irene saw pictures of aborted babies with perfectly formed bodies. She spent three days crying and came through that experience determined to tell the world what abortion is. She is certain that if she had known beforehand, she would never have paid a doctor to “murder my child.”

Soon after, Irene began a Silent No More Awareness Campaign in Holland, which invites those affected by abortion to share their stories to help others who have been hurt by abortion. The campaign also spreads the truth about the negative effects of abortion. In addition, Irene runs a new organization devoted to educating the public and helping pregnant women with baby clothes and supplies. She speaks around the world, sharing her experience and knowledge. She says:

I speak for the dead, to protect the living, and will do everything within my means to be a voice for the voiceless.

You can learn more about Irene and her efforts at www.savethe1.com and www.silentnomoreawareness.org.