How about we really “come together to celebrate life”?

Last Thursday, Boston held an interfaith prayer service to commemorate the tragic events of the Boston Marathon this month. President Obama’s comments were streamed live, and the text of his remarks can be found here.

The president has an uncanny aptitude for making overtly pro-life statements in favor of select lives, while his stance on abortion (a death sentence to thousands of American children every day) is well-known: he is the most pro-abortion president in the history of America.

But Thursday’s remarks from the president were not an isolated incidence of pro-life sentiment that isn’t. Following the Newtown, CT tragedy last year, the president made a number of comments about the sanctity of life and how innocent life deserves protection.

The following are statements by President Obama at the interfaith prayer service on Thursday: 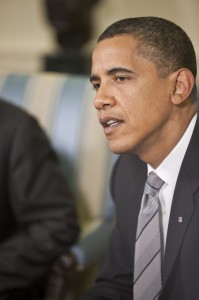 If the nation came together to mourn the loss of the innocent children who have been aborted in our country since the legalization of abortion in 1973, and afforded one minute of silence for each of the sixty million lives lost, we would be silent for more than one hundred years.

Over successive generations, you’ve welcomed again and again new arrivals to our shores; immigrants who constantly reinvigorated this city and this commonwealth and our nation.

And yet this president affirms a woman’s so-called right not to welcome new arrivals of children into her life if convenience dictates otherwise. Where would America be if cities like Boston and New York had not welcomed immigrants in the early days of American history? Why not afford the same opportunity to unborn Americans today?

Americans have a wonderful tendency to rush to aid those who are in need. That trait is being demonstrated by the outpouring of support in West, TX this week. But when it comes to the pre-born, those “who would visit death upon innocents” are not acknowledged as wrongdoers. Figures like Kermit Gosnell escape media attention and scrutiny from rule-enforcers for years despite the horrific acts being visited upon the innocent in their places of business.

That’s the message we send to those who carried this out and anyone who would do harm to our people. Yes, we will find you. And yes, you will face justice. (Applause.) We will find you. We will hold you accountable. But more than that, our fidelity to our way of life, for a free and open society, will only grow stronger, for God has not given us a spirit of fear and timidity, but one of power and love and self-discipline.

Then why, President Obama, do you not so much as comment on the travesties of abortion? Why do you vote against babies born alive being afforded medical attention – the most basic human instinct in the face of such an innocent and vulnerable life? When will your compassion for victims of gun violence, victims of bombings, and victims of natural disasters translate to the victims of the abortion holocaust?

And we come together to celebrate life…

The day that America comes together to celebrate life – all life – will be a magnificent day indeed.