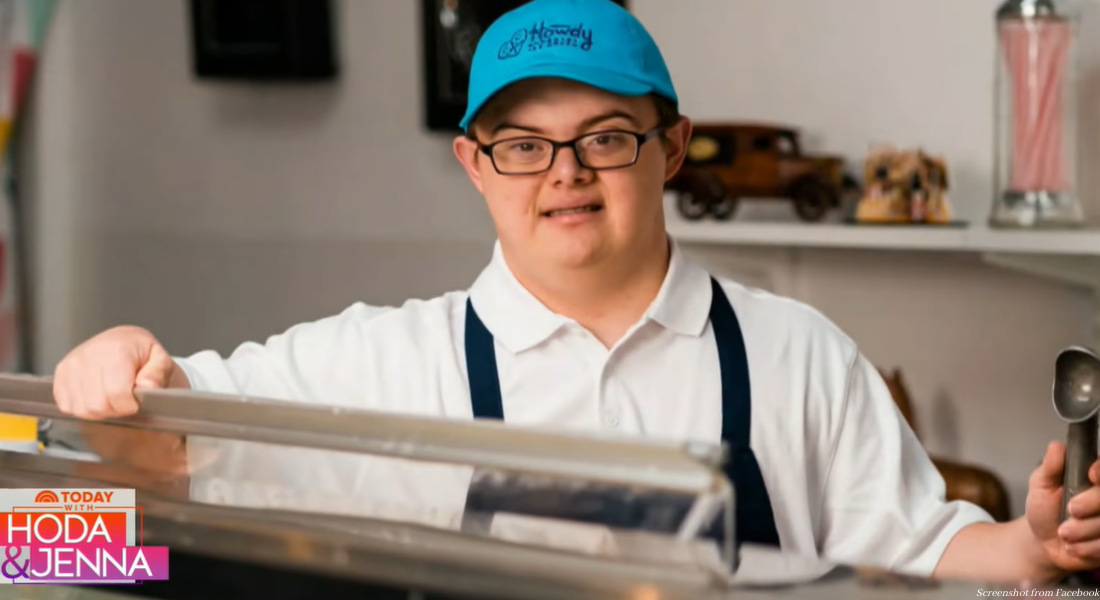 Quarantines and social distancing set in motion due to the COVID-19 pandemic have caused businesses across the country to go bankrupt. Yet in Dallas, Texas, one business was saved after the community worked together to save it.

Howdy Homemade Ice Cream is not your typical sweet shop. Since 2015, it has employed people with disabilities. Owner Tom Landis told TODAY that it all started when he met Coleman Jones. “It was a real busy night at one of my other restaurants when I met Coleman, and he just immediately jumped in and helped serve food and was super friendly,” Landis said. “I called his mom up the next day and said, ‘Hey, you know, I want to hire this guy.’ He has so much potential, written all over him, and leadership.”

Jones quickly became the face of the shop, and as Landis began hiring other employees with special needs , the community embraced them. “If I’m behind the counter and someone comes in, they have a visual look of disappointment on their face,” Landis said. “They want to see Coleman, they want to see my crew. They’re doing what they do, and frankly, they do it better than me.”

For Jones, it was more than just a job. “I was blessed that I ultimately get the opportunity to not only be employed for Tom, but to also be an asset where you’re going to blossom,” he said. Jones is now the vice president of the company.

But the pandemic severely crippled Howdy Homemade’s business, like many other small businesses around the country, and they were in danger of closing. So one of their customers, Jaxie Alt, started a GoFundMe page to keep the shop open.

“People love his mission, they love his ice cream, and they need something to root for right now,” Alt told the Dallas Morning News. The GoFundMe blew past its $75,000 goal to raise over $100,000. “It gives you goosebumps,” she said. “People we don’t even know have given $100, $500, even larger donations… It’s a place where so many of these adults wouldn’t get a shot anywhere else.”

“I think it got to the point honestly where it took absolutely a very clear message of me realizing ‘You know what? I can’t do it. I can’t do it, and it’s time to throw in the towel,'” Landis said. “And I honestly think that’s when God said ‘You can’t do it? Yep, no, you can’t. But you know what? I’m going to surround you with a village of people, people from all over Dallas.'”

But that was just the beginning. In October, Landis and Jones appeared on the TODAY show, where a virtual wall of fans cheered them on. But there was one fan they didn’t expect: millionaire investor Marcus Lemonis. Host of “The Profit” on CNBC, Lemonis had a $50,000 grant for the ice cream shop, saying he was inspired by their mission.

“I spend my whole career, my whole life, really helping businesses get to the next level and it’s clear to me that you guys are prepared to get to that next level,” Lemonis said. “I would like to give you a $50,000 grant specifically used to hire more people to grow what you’re trying to do in the Dallas community. I think all of us through this entire pandemic are blown away by the leadership you’re showing and the role models the two of you are to the rest of us.”

People with disabilities are typically underemployed, but business owners like Landis are hoping to show how capable they are. Landis explained that over three million adults with special needs live in Texas, and his goal is to offer them meaningful employment.

“We’ve had multiple times where you just stop and tear up because it’s no longer our restaurant. It’s truly the City of Dallas’s restaurant,” he told TODAY. “People are not supporting Howdy Homemade because of Tom Landis. They’re supporting it because of Coleman and the others, and I think as more businesses start to realize that, the world will change.”