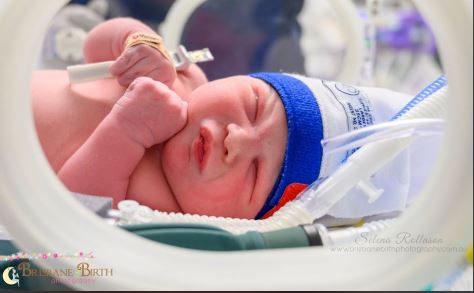 A photographer in Australia has shared the story of a newborn baby girl who had been diagnosed prenatally with a “terminal” genetic condition, but in the days since her birth has been found to be healthy.

“!! WE ARE IN SHOCK !! We are all recovering from shock here today,” wrote Selena Rollason on her Brisbane Birth Photography Facebook page. “Late yesterday we received the news that baby Brianna has defied the odds and delivered a Christmas miracle for her family.”

!! WE ARE IN SHOCK !! We are all recovering from shock here today. Late yesterday we received the news that baby…

During pregnancy, the baby girl had been diagnosed with a rare and terminal genetic condition due to having a small cerebellum and Pontocerebellar hypoplasia or PCH — a group of related conditions that affect the development of the brain. Doctors predicted she would live maybe a few hours after birth or maybe into young adulthood.

“The family were told to ‘terminate’ the pregnancy,” said Rollason. “As there is no cure. There is no ‘fix’. There is no answer.”

But her parents refused abortion and moved forward with the pregnancy, afraid of losing their baby girl after having lost another child at 19 weeks gestation less than a year earlier. When Brianna was born, everyone noticed she was doing better than expected as she only needed a small amount of support breathing. She also passed the first round of tests, and nine hours after birth she was breathing on her own. As she continued to meet milestones no one expected her to meet, doctors were astounded. But still, they ran tests to determine what her official diagnosis would be. They were never able to discover one.

<3 Welcoming Brianna – a "special" baby <3(story shared with permission)It's been a week of crazy chaos, heightened…

Within a week of her birth, doctors deemed Brianna to be healthy — no terminal genetic condition of any kind.

“The initial diagnostic symptoms she had have miraculously disappeared and she was cleared of the condition after passing a million and 1 tests – from eye scans, to renal tests, to ultrasounds and even a brain MRI,” wrote Rollason.

“I would not believe this had I not attended the last scan (to support the family as a bereavement and birth doula) and witnessed the examination of the brain and saw the fluid with my own 2 eyes.”

Brianna’s family is celebrating her birth and their miracle. They want her story to be shared and they plan to tell more of it in the future.

“[…] Baby Brianna has proven that hope must always exist,” said Rollason, “and that miracles (no matter how small) really can happen if we believe.”