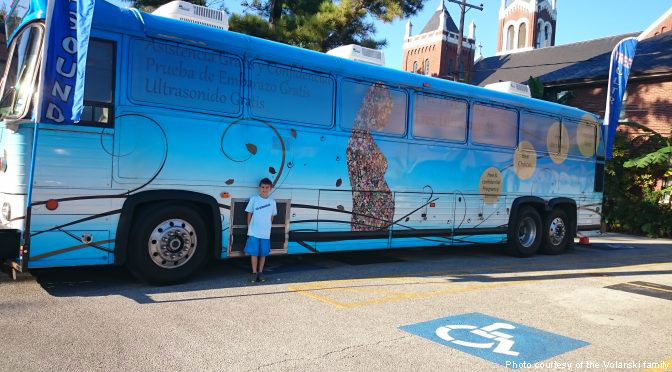 At four years old, Max Volanski’s curiosity about why his mother and sisters were praying on a sidewalk began to peak. By age five, he was flat out asking his mother what they were doing. Christy Volanski didn’t want to scare her son by telling him about Planned Parenthood and abortion, but Max persisted, so she simply told him that Planned Parenthood is a place that’s “harmful for moms and babies” and that sadly, some mothers don’t think they can care for their babies so they make it so the babies can’t be born. Five-year-old Max responded, “That needs fixed!”

Soon after learning about abortion, Max began praying with his family at Planned Parenthood of the Gulf Coast in Houston – the largest abortion facility in the United States. But Max saw an opportunity to do more when he noticed a big blue bus parked on the road.

“I thought the Big Blue Bus was really neat,” said Max. “At the time I didn’t really grasp how very important it was.” Max praying on the sidewalk in front of Planned Parenthood of the Gulf Coast at age 5. Photo couresty of the Volanski family.

The Big Blue Bus is the mobile crisis pregnancy center for the Houston Coalition for Life. It has parked outside of Planned Parenthood six days a week since February of 2011. A second mobile crisis pregnancy center began parking there in February of 2014. There have been over 10,000 women who have visited the bus and of those women with a positive pregnancy test, 90% have chosen life for their preborn children.

“Our Big Blue Bus was a response to Planned Parenthood of the Gulf Coast building the largest abortion facility in our country in Houston,” explained Christine Melchor, executive director of Houston Coalition for Life. “Since there was no place to build or lease property near them we decided to go mobile. We have a beautiful 44 foot retrofitted bus (5 rooms!) with a state of the art ultrasound machine given to us by the Knights of Columbus.” Four years ago, inspired by the work Houston Coalition for Life was doing, Max began participating in the the group’s annual Walk for Life in order to help them help more women and babies. The first year he raised $2,000. The second, he raised $3,000. And during his third year he raised an astounding $12,000. This year, his goal is 16 for 16.

“This year I’m trying to raise 16k since it’s 2016,” said Max. “I know this is a hard goal so I need everyone’s help. I need your prayers. I need your sponsorship. I need you to share this.”

Max has become one of the top fundraisers for the Walk for Life and people take notice of him.

“I remember his mother telling me that before Lent of his seventh year she asked him what he would like to do for Lent and he told her that he would like to pray at Planned Parenthood weekly,” said Melchor. “He really stood out on the sidewalk holding his sign and praying. You could tell just by looking at him and talking to him that this was really important to him. […] He doesn’t’ give up or get disinterested and has been a courageous and determined example to all of us who known him and to even those who just hear about him.” Max praying on the sidewalk with an image of Our Lady of Guadalupe. Photo couresty of the Volanski family.

Max believes any child can do what he’s doing by seeking out their local pro-life group and getting involved. He says they can even join him by walking wherever they live to support the Houston Coalition for Life.

It can be hard for anyone to pray outside of an abortion facility, but for a child, it could be even more difficult. Sometimes he and his family get dirty looks from the Planned Parenthood escorts, but they pray for the escorts. Max thinks there are probably people who don’t like what he’s doing, but he doesn’t know them.

“When I’m on the sidewalk, more than sad,” said Max, “I feel determined to work to help women and save babies.”

Melchor knows Max is the future of the pro-life movement and she sees his work and dedication as vital. “I believe that he will go on to continue to inspire and motiviate people to want to care for and love the mothers who are in crisis and their unborn children who deserve to live,” said Melchor.

Max wants to be either an engineer or a programmer when he grows up. No matter what path he chooses for his career, his family is already incredibly proud of him and his accomplishments.

“I’m very proud of Max just for his commitment and doing this for the fourth year in a row. It’s a lot of work on his part,” said his mother. “He’s done a lot of interviews. I’m just proud of him for wanting to do this again this year. Because it has been some sacrifice on his part. I’m proud of his desire to help women and children and being truly pro-life. We are proud of the young man he is becoming.”

Max is proud of himself too:

I am just incredibly proud I can help defeat such a horrible cause. I’m working through 1. raising awareness and 2. fighting it.

Max and his family know that every life is worth it, even the escorts and the people working inside of abortion clinics. With kids like Max on the front lines, it’s only matter of time before abortion is ended.