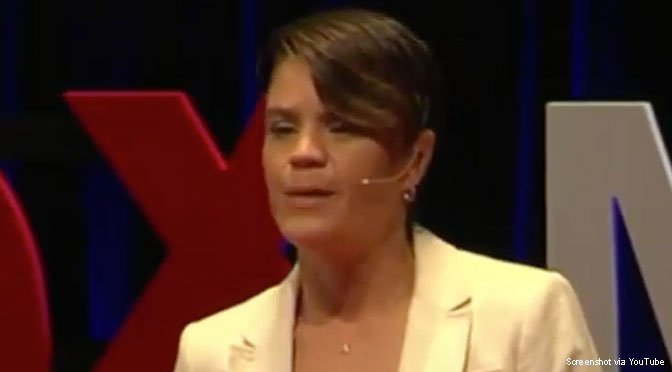 At the age of ten Roy learned she was losing her hearing. By age 15, she was classified as profoundly deaf. She was filled with fear during those years, but today, she says that being deaf has given her  a unique way of experiencing the world. She believes that these differences of people with disabilities will help “make and design a better world for everyone, both for people with and without disabilities.”

“I believe that losing my hearing was one of the greatest gifts I’ve ever received,” said Elise Roy, a former disability rights lawyer in her TED Talks.

As a disability rights lawyer, Roy had to learn international policy in order to work on the UN Convention on the Rights of Persons with Disabilities. Her focus was on convincing people of the capabilites of people with disabilities.

After a few career changes, Roy decided to go back to school to get her master’s in social design. While in school she discovered a love of woodworking, however it was more dangerous for her because she couldn’t hear the sound the wood would make before it would kick back at her. She saw a problem that needed fixing.

Her solution was safety glasses that would visually alert the woodworker of the pitch change in the tool before the human ear could even pick it up.

She says it hadn’t been thought of before because she was a beginner and because she is deaf. Her unique experience of the world allowed her to create a product that can help any woodworker, disability or not.

Roy began to wonder what would happen if we designed for disability first.

“As you’ve seen when we design for disability first, we often stumble upon solutions that are not only inclusive but also are often better than those when we design for the norm,” she said. “[…] This moves us from the mindset of trying to change the hearts and the deficiency mindsight of tolerance.”

Because of their unique perspectives on the world, Roy believes people with disabilities have enormous potential to be designers. She knows this because her own constant need to adapt, in sports and life, have helped her to become a problem-solver.

“You are creative. You are a designer. Everyone is. Let people like me help you. Let people with disabilities help you look sideways and in the process solve some of the greatest problems,” she said.