In the early 2000s, Mom Diamond and Dad Chris struggled for several years with infertility. In 2002, Diamond underwent a successful artificial insemination procedure. At first, the couple and Diamond’s five-year-old son from a previous marriage were told that they would be having twins. Then, a later sonogram revealed five babies. But it wasn’t until the babies were actually born that the couple learned they actually had six babies — sextuplets.

Diamond had been hospitalized in her second trimester due to a blood clot in her lungs, and on July 8th, 2002, the babies were delivered via C-section at 26.5 weeks gestation. They spent about three months in the hospital before they were ready to head home with their parents. 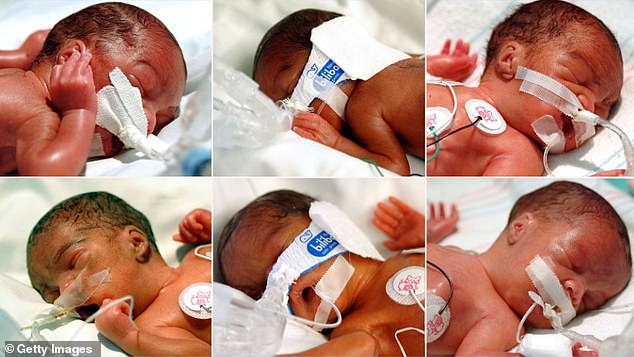 Diamond told Dateline in 2003 about those first weeks and months. She recalled lots of laundry, diapers, and formula, and said the babies used up five dozen diapers and two cases of formula each day. As the children grew, the couple spent around $1,100 in groceries weekly, and washed 20 loads of laundry. Various media outlets have followed the children’s growth through Kindergarten, middle school, and eventually high school. Though Chris and Diamond divorced in 2012 and both later remarried, they have maintained a positive relationship over the years in order to raise the sextuplets.

Reflecting on the children’s recent graduation from high school and plans for college, Diamond told TODAY, “The morning of the ceremony, I sat in bed looking at their baby pictures and felt depressed.” Chris said,”These kids have been my life for almost 18 years. They have been my reason. I keep reminding myself it’s just going to be different, but everything will be OK.”

Kiera and Kobe are headed for a local community college, where Kiera will major in cosmetology. Kaylynne will study physical therapy at Alabama State University. Kaleb and Kieran are headed for Alabama A&M, where Kaleb will study computer science and Kieran will study art. Kyle, who is autistic, is enrolled in a life skills program.

Diamond expects that when they are all back together again, they’ll continue their habit of talking in a way only they can understand. She shared that often, “No one else can understand what they’re saying. I’ll be like ‘Slow down, enunciate.’ And they look at me all confused, like, ‘How did you not catch that?’ It’s been that way since they started talking.”