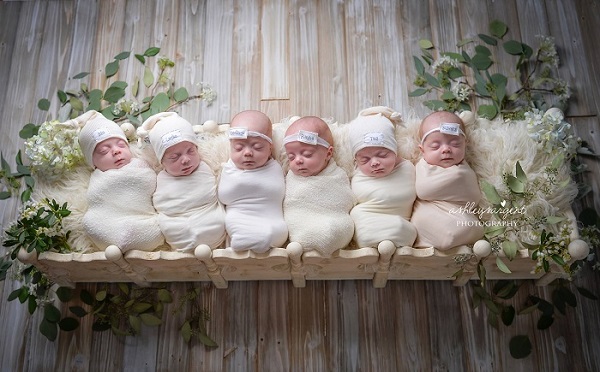 On December 11, 2017, Courtney Waldrop and her husband Eric welcomed six new babies to their family of five. The couple, who told People that they always wanted a large family, were thrilled to add the three baby girls and three baby boys – Rivers, Rayne, Rawlings, Blu, Tag, and Layke – to the mix, but they were also nervous. The sextuplets were born before 30 weeks gestation and they were at risk for many complications. Yet the couple chose life for all their children, despite the odds.

“I was scared to death,” Waldrop told People. “I’m a smaller framed girl, and my first thoughts were on how I was going to successfully get six kids here without something happening to them or me. There was a lot of fear. We didn’t know what to do or think.”

The Waldrops are now a family of nine after refusing selective reduction abortion of their sextuplets. Photo copyright Ashley Sargent Photography, LLC.

The couple, who have been together since middle school, married in 2004, and welcomed three sons – Saylor, now eight, and twin five-year-olds Wales and Bridge. They suffered from miscarriages, and fertility treatments helped them conceive the twins. After that, they lost another child to miscarriage.

“It was devastating because I can get pregnant so easily, I just can’t hold on to them,” said Waldrop. “It was upsetting, but we had experienced it before and I knew I had a medical issue that contributed to it.”

READ: Quintuplets saved from selective reduction now ‘saving the lives of others’

A low-dose treatment of fertility drugs was supposed to help the couple achieve pregnancy without worrying that they would become pregnant with more than two babies at once. But in May of 2017, they discovered they were expecting six.

The risks were high for the babies and their mom. There was concern the babies would be born too early and that Waldrop could suffer from strokes, high blood pressure, and gestational diabetes, among other issues. Doctors suggested selective reduction in which some of the babies would be aborted to increase the odds of survival for the rest. The couple refused, and chose life for all six babies.

“Our faith in God is very strong, and we never would have thought we would have considered that. But with the risks involved, no doctor could sugar coat what could happen. The risks are real for me and for the babies. […] When we let it go and turned it all over to [God], those fears – though we knew the risks are still there – were lifted from us,” said Waldrop.

At the beginning of November 2017, Waldrop was placed on bed rest at about 24 weeks in an attempt to prevent premature labor. By Thanksgiving, she was hospitalized as the doctors prepped for the arrival of the sextuplets.

At 29 weeks and six days, the babies were born via C-section after Waldrop’s water broke. She lost a lot of blood and required a blood infusion. The babies, each born weighing just over two pounds, did well and were off the ventilator within days of their birth. On February 3, at almost 2 months old, two of the baby girls – Rivers and Rawlings – were able to go home. On February 17th, the third baby girl – Rayne – joined her sisters. And by February 23rd, all six babies were home with their big brothers and parents.

Now three months old, the babies continue to do well and Waldrop says they are “growing like crazy.”

“We are blessed beyond words and so excited to get life started with these sweet little miracles from above,” said Waldrop.