One reason the abortion industry is quaking in its combat boots is because it knows if Roe v. Wade were to return to the Supreme Court, there is a very good chance it would be overturned. The simple reason for that fact is that since 1973, technology has advanced so far that we can now see life in the womb, beyond any shadow of doubt. It’s not a stretch for anyone’s imagination to know that taking that life is murdering a preborn human being. Further evidence of the humanity of the preborn is amazing new medical advancements: doctors have now mastered in-utero surgery. Just this week, another baby who had surgery in the womb came into the world, giving her parents hope that their precious daughter may enjoy a full life. CBS News reports:

Geoff and Rachel Finn were ecstatic to learn they were expecting a new baby when they got the news no parent ever wants to hear. Their daughter had rare congenital heart defects that meant she would unlikely survive after birth.

“That was incredibly difficult,” Rachel said. “I could just see the ultrasound technician’s face completely change. We knew there was something wrong right away just by the look on her face.”

Their little girl, Ivy, was diagnosed with hypoplastic left heart syndrome. Her heart wouldn’t be able to pump oxygen to her body. She also had a condition called intact atrial septum, worsening her case.

But doctors told the Finns there was an experimental surgery, never before performed while still in the womb, that might give Ivy a chance.

“I was just very thankful that there was something that we could attempt,” Rachel said. 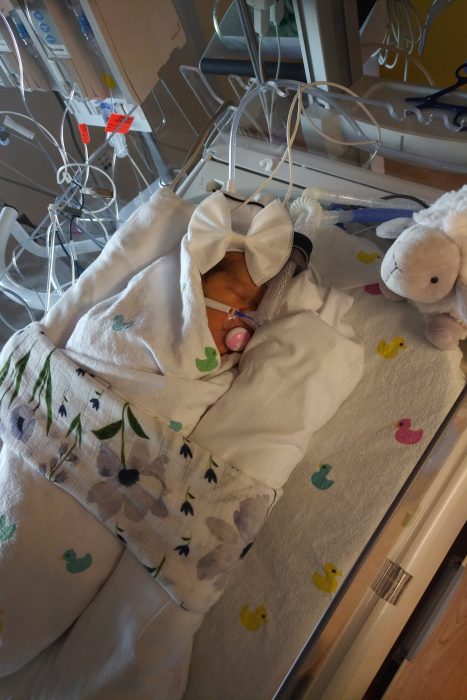 Baby Ivy, from the Finn’s Facebook page, “Ivy’s Story: A Journey through HLHS”

Baby Ivy has already been through her first of three open heart surgeries, and her parents say they are grateful for every minute with her. That surgery in the womb gave these parents a chance to meet their child-and very possibly to have a lifetime with her. “It was pure joy,” Rachel said of meeting her daughter at birth. “They placed her on my chest as soon as she was born and she came out screaming and that was something we weren’t sure we’d ever hear and so it was amazing.” Geoff, meanwhile, promised to love their daughter, no matter what, explaining, “We kind of said, ‘Ivy, if you live for 10 seconds or if you live for 100 years, we’re going to be there and loving you with all of who we are throughout the entire time.'”

But Baby Ivy’s story is only one of many, such as this story, where doctors in Canada cut into a baby’s spinal cord in the womb, in an effort to repair spina bifida. This condition is one where parents are often advised to abort when detected before birth. But these doctors went to work to save the baby instead. Live Science reports:

On June 4, a team of surgeons at Mount Sinai Hospital and The Hospital for Sick Children (SickKids), both in Toronto, began the two-and-a-half-hour procedure on a woman named Romeila Son, whose fetus was 25-weeks pregnant old at the time, according to a Nov. 14 statement from the hospitals.

During the operation, doctors cut through the mother’s abdomen and uterus to reveal the fetus, according to the statement. Then, the fetus was carefully maneuvered so that her back was facing the surgeons, which allowed them to begin the delicate procedure to enclose the spinal cord in the spine.

On August 19, 2017, baby Eiko was born — completely healthy. And Live Science notes that this is actually not that unique:

The prenatal surgical procedure has been around for several years, and has been documented in clinical trials dating back to 2003, according to the NLM. But this marks the first time that the procedure has been performed in Canada — in the past, pregnant women in Canada have had to travel to the U.S. and find a doctor there who could perform the operation.

One of the most dramatic examples of fetal surgery is this powerful one, reported in 2014. In it, Dr. Ramen Chmait at Hollywood Presbyterian Hospital saves twin girls from a condition called Twin Twin Transfusion Syndrome. When Jonathon Van Maren recently reposted this phenomenal video on Facebook, Jessica Kersey commented with a picture of her own: 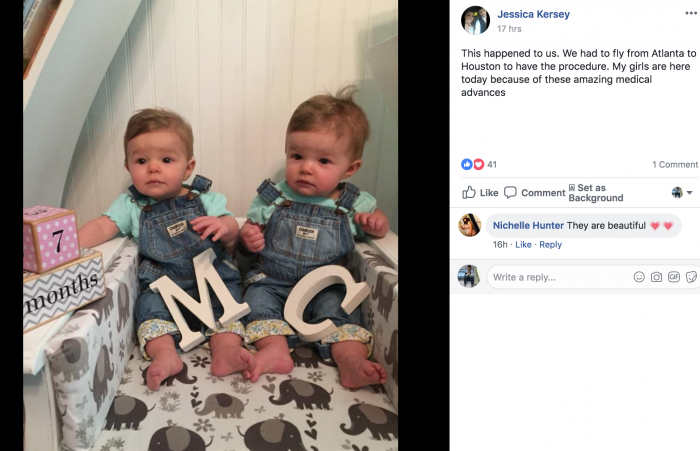 The fact is, there is no longer a question of whether or not the “tissue” in a woman’s womb is a baby. Doctors are not operating on an inert clump of cells. Just ask all of these parents, their doctors, and the many others who are celebrating their children’s lives. And if you go behind closed doors of the abortion industry, you can ask the abortion workers, too. They know the right answer. And that’s why they fear that Roe v. Wade may be revisited.