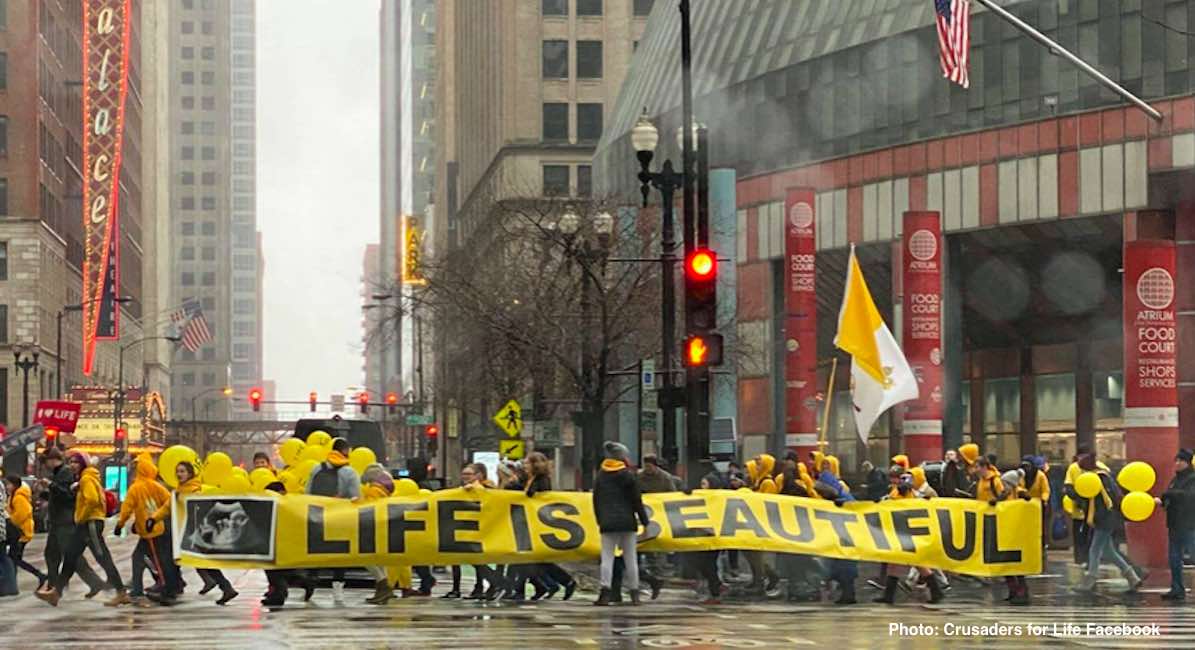 Despite rain, sleet, and near freezing temperatures, 9,000 people showed up for the 2020 March for Life Chicago on Saturday, January 11th. Because of the strong response to radical pro-abortion legislation passed in Illinois in 2019, the March’s location had to be changed to a larger venue and the schedule of events was significantly expanded. In addition to the March itself, other offerings included an all-day convention intended to connect pro-life individuals and organizations, an evening banquet, a Catholic Mass, a youth rally, and a young adult swing dance.

Live Action News spoke to two members of weDignify, an Illinois-based group that “equips, educates, and empowers students to be pro-life leaders on campus and beyond,” about their experience at the March. Lauren Matson, a University of Illinois at Urbana-Champaign sophomore majoring in Pre-Med, attended the Chicago March for Life for the first time this year. She traveled with a group from Chicago’s Loyola University to the March for Life in Washington, D.C., last year, and noted that the counter protesters were much more visible at the Chicago March. Matson was saddened that the counter protesters didn’t even seem familiar with what the pro-life message actually is, choosing to shout angry mantras like “my body/my choice” rather than to engage with the real substance of pro-life ideas. Matson said she’s grown more convicted in her pro-life feminist beliefs in the last year, and that those beliefs “made it harder to see [the protesters] now that I know better what true female empowerment is.”

She added, “If the pro-choice people would listen a little more, I don’t think that they’d disagree with what we’re saying. I think they’d agree that women can do hard things, even in less-than-ideal circumstances.”

Another weDignify member, Alex Lehan, addressed the crowds in Daley Plaza. A junior studying Mathematics at the University of Illinois at Urbana-Champaign, Lehan first encountered weDignify at the end of her freshman year when a dorm neighbor invited her to a meeting. That summer, Lehan attended weDignify’s annual Leadership Bootcamp, and it “lit a fire” in her to advocate for preborn children and their mothers. Lehan went on to become a weDignify service chair on her campus and has spoken at several weDignify events in the past.

She told Live Action News that her speech at the rally explored what women’s empowerment really means, saying that “women often find themselves isolated” when they experience unplanned pregnancies, and that telling a woman “your body, your choice” doesn’t support her or give her options. Lehan told the crowds that the pro-life message tells women, “You have options that are loving and life-giving. You are strong enough (to choose life).”

Certainly, recent legislation has dealt a blow to the safety and wellbeing of preborn children and their mothers in Illinois, but the strong attendance at the March for Life Chicago indicates that all is not lost. One step at a time, committed Midwesterners are building a culture of life.