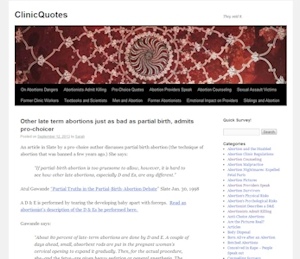 It isn’t easy to hear the words day in and day out, or to see over and over the tiny bodies ripped apart or burned to death. It’s gut wrenching. It’s heartbreaking. And for Sarah Terzo of ClinicQuotes.com, it’s part of her life’s mission to expose the truth of abortion from the mouths of those who kill for a living.

As a young teenager, Terzo saw a picture of a child who had been aborted at eight weeks gestation. It had been ripped to pieces and Terzo instantly realized that this was a child who had been killed. The photo roused within her a deep desire to do whatever she could to protect babies from abortion. But after a disappointing high school debate with a pro-choice student, Terzo felt she wasn’t as knowledgeable as she needed to be in order to defend her pro-life stance. Immediately, she began researching in order to prepare for future conversations about abortion.

“This was before the internet,” explains Terzo, “but I started sending away for literature from every pro-life group I could find, going from library to library to get out pro-life books, and looking at old magazines and newspapers, then on microfilm, to learn as much as I could. Everything I learned made me even more determined to fight abortion.[…] The material I found most compelling was the first hand quotes and accounts by abortion providers themselves. I started a project to compile as many of these testimonies as I could and went looking in all kinds of obscure places for them.”

By the time the internet became widely available, Terzo was in college and had amassed a large list of abortion quotes by different abortion providers. She wanted to put this list on the web, but there was no such thing as WordPress or Blogger at the time. Terzo taught herself to build a website from scratch. Her hope was that pro-life individuals would go to the site and use the information she had compiled in their own articles, debates, speeches, and letters to the editor. She also hoped that pro-choicers would read the quotes and change their stance on abortion. And eventually, with the help of fellow pro-life activist Andrew Anderson, Terzo was able to build her blog, now ten times larger than the site she originally built.

In the seventeen years since, ClinicQuotes.com has featured thousands of quotes about abortion. Of all of them, Terzo says the one that stands out to her the most is from infamous late-term abortionist LeRoy Carhart, MD. She says that the “pure bluntness” of his remark is what really shocked her.

Carhart, while addressing the Religious Coalition for Reproductive Choice in 2001, had said, “We’re not asking for the right to suck the brains out of every child that walks down the street, we need to continue to offer safe abortions to women who need them to be done.”

The casual use of the phrase “suck the brains out of every child” details the horror of what abortion truly is. And, like Carhart’s quote, each citation on ClinicQuotes.com helps readers to remove their abortion blinders. One such quote is from an interview of former abortionist Grant Clark, MD by Oregon Right to Life:

Interviewer: The women would actually see-

Doctor: Oh yeah. And not very much fun for them or for anyone else. Um..that was probably the most difficult part of the abortion procedure with the suction abortions, you had to go through what you suctioned out of the uterus and identify perfectly formed little arms and legs and little hands, skulls were usually crushed. Eyes and cute little noses- you just killed a baby. And I don’t care what you do, you can’t bring them back.

But what may be even harder to turn a blind eye to than that, are the photos of the aborted babies. Each one so obviously human. So obviously a child. So apparently a person’s son or daughter, poisoned or torn apart because they didn’t fit in to their mother’s grand plan. Those photos alone are enough to make anyone stop and think. 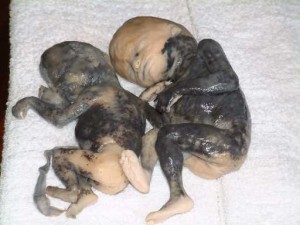 Today, ClinicQuotes.com receives over 500 page visitors each day and refers 1 to 2 woman a day to a Crisis Pregnancy Center. Recently, Terzo has noticed an increase in the amount of women visiting her site who are considering abortion.  She is aware of at least five children whose lives were spared because their mothers, who had been considering abortion, changed their minds after visiting ClinicQuotes.com. Knowing she helped save those children makes it all worth it.

“If I work on it [her blog] too much, I tend to get nightmares,” says Terzo, “You would think that familiarity would make it easier, but often it doesn’t. What keeps me going is knowing that the site is having an impact, that it has changed minds and hearts. […] I take comfort in the fact that what I am doing is helping people. Reading the information and seeing the pictures makes me even more determined to do what I can. I know I am fighting for those children. Their deaths have not been in vain. As hard as it is, it makes me feel good to know I am having an impact.”