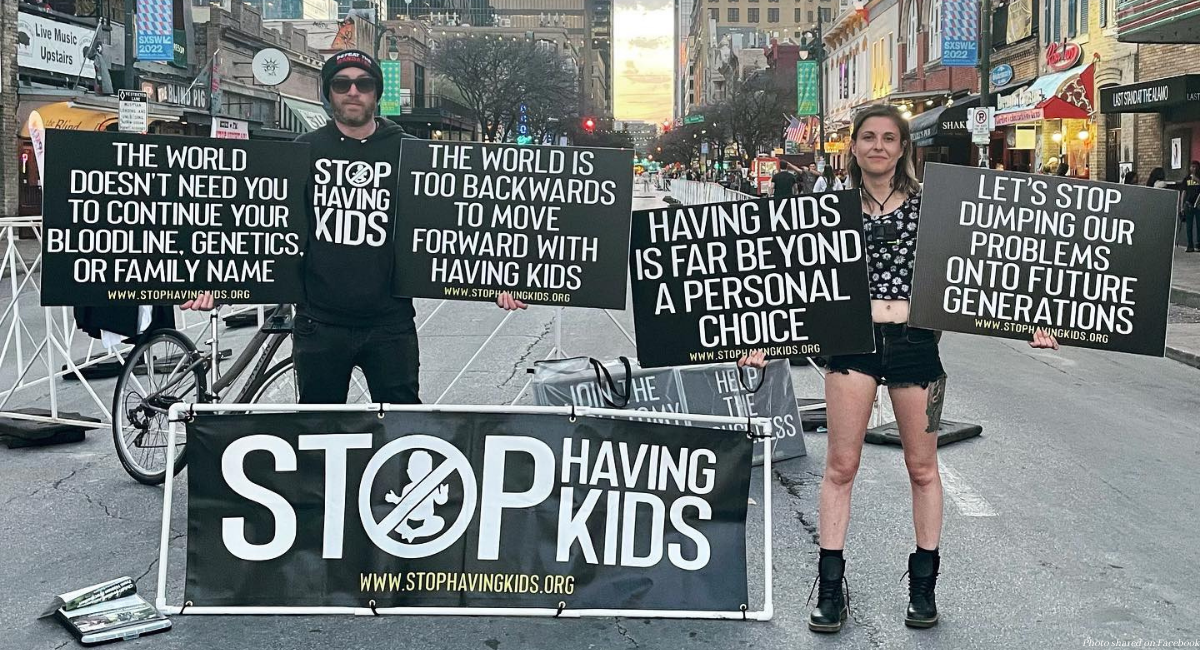 A Portland-based organization urging people not to have children has gone national. Stop Having Kids gained local notoriety with billboards erected in the Portland area, but is now spreading to other cities throughout the country.

Ashley Riddle, spokeswoman for Stop Having Kids, told the Willamette Week the group is an “antinatalist” group and a “collective liberation movement” opposed to all human reproduction. The billboards were made possible thanks to anonymous donors. “There was some difficulty in finding a company that would follow through,” Riddle said. “[Companies] would seem all for it, and then they stopped responding.”

According to the Stop Having Kids website, choosing not to reproduce is a way to show that you truly care for others. The group calls for normalizing and destigmatizing sterilization and abortion, and claims it is cruel to bring children into the world as it is today. Reasons to not have children range from outdated, debunked claims — from the idea that there are enough people already — to the outright ableist idea of preventing birth defects.

And though the group is headquartered in Portland, it is growing. Chapters are forming in cities like Houston and Boulder, while the group’s Facebook page reports interest from cities like San Francisco and New York City. The group also frequently engages in outreach around the country, most recently visiting SXSW in Austin, Texas, to spread its anti-child message.

One follower tweeted sentiments reminiscent of the lines spoken by Agent Smith in “The Matrix” — that children are “horrible things,” and a “virus” and “bacteria” consuming resources. The follower also claimed that sex was not “designed” for reproduction, but for “FUN.”

Children are a Virus, a bacteria consuming all the resources available and moving on. I agree #stophavingkids
Enjoy sex for what it was designed to be. "FUN"

Other similar groups are operating outside of the United States. Spencer Rocchi, a Canadian teacher, founded The Birthstrike Movement and believes having children is a “crime against humanity.”

The argument that the world is overpopulated is nothing new, but even though it was debunked long ago, it continues to gain credibility. Many continue to believe that population control is needed, while polling has shown that a large number of Americans believe the population is growing too fast. The reality, however, is the exact opposite:

In the United States, for example, deaths are at a record high while births are at their lowest rate since 1986, with overall population growth at the lowest in over 100 years — and the only reason it was so low then was because of the Spanish Flu pandemic.

Additionally, almost half of the world’s countries are below replacement rate, meaning the population is declining, not growing.

A Yale Global report found that 50 years ago, only six countries had fertility rates below replacement level, while today, it is a record-high of 83 countries. And this can have devastating consequences; when there are more elderly people than there are young, the economy suffers, social net programs are strained, and there aren’t enough young people to care for the elderly as they age. This, coupled with numerous countries’ move toward legalizing assisted dying, is not likely to make for a hopeful future for aging populations.

Japan, often described as a “demographic time bomb” due to the country’s low fertility rates, is a case study of what this looks like in real life. After decades of low fertility rates, entire villages are disappearing as the elderly die, while young people struggle to find work. The elderly that are left, meanwhile, have no one to care for them.

Another paper, from the Organisation for Economic Co-operation and Development (OECD), pointed out that this is already forcing governments to raise the retirement age, a trend which will continue as fertility rates fall. And as Professor Ibrahim Abubakar of the University College London told the BBC, losing populations to replace the elderly as they die will be devastating.

“To be successful we need a fundamental rethink of global politics,” he said. “The distribution of working-age populations will be crucial to whether humanity prospers or withers.”