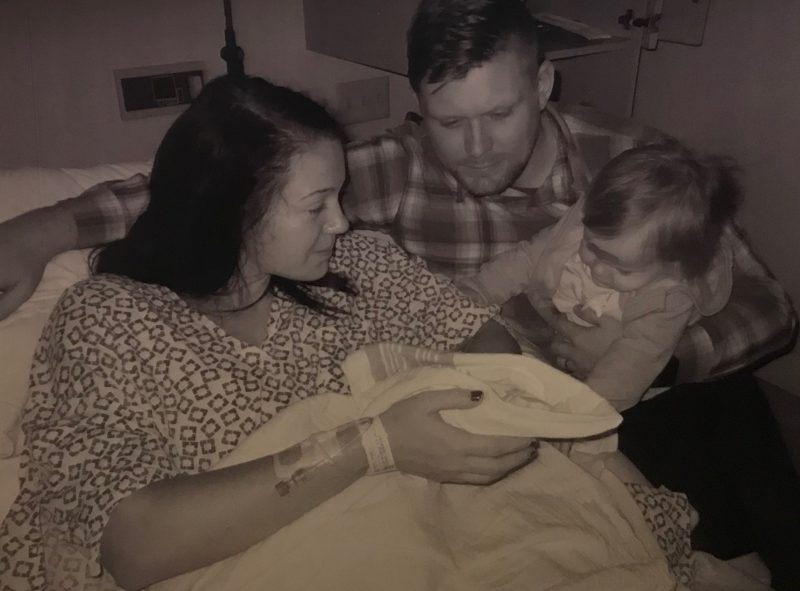 For every expectant mother, delivering a stillborn baby is considered the worst possible scenario. Unfortunately, this is a tragedy that many families suffer… including the Oprean family. But for them, it was an opportunity to see their son, and show him the love and dignity that all people deserve.

Philip and Sarah Oprean knew even before getting married that they wanted to have children. And that dream came true quickly for them: their daughter, Lucy, was a honeymoon baby. “The reality and beauty of our new marriage and its purpose as intended by God hit us pretty much right away,” Sarah said in an interview with Live Action News.

For Sarah, an avid CrossFitter, her first pregnancy was easy. “I felt great, I was able to continue with my workouts — modifying of course as things became difficult or unsafe — until the day before I went into labor with her,” she said. “I never got really sick during early pregnancy, I didn’t have crazy cravings, and I didn’t gain excessive weight.” On her due date, in August of 2016, Lucy was born, and Philip and Sarah were thrilled with their new addition.

Shortly before Lucy’s first birthday, they began talking about having another baby. Little to their surprise, one was already on the way. “I found out I was pregnant the day before Lucy’s first birthday. To my surprise, and slight disappointment in myself, I was sad,” Sarah said. “Not sad to have another child, but sad for Lucy that her life would change so much and she hadn’t even turned one yet! Silly, I know, but these are the thoughts of an emotional pregnant lady. I gave it a few days before I told Phil because I wanted Lucy to have her birthday without everyone already thinking about the new baby! He was so excited when I finally told him, and my sadness turned into acceptance and eventually excitement, too.” 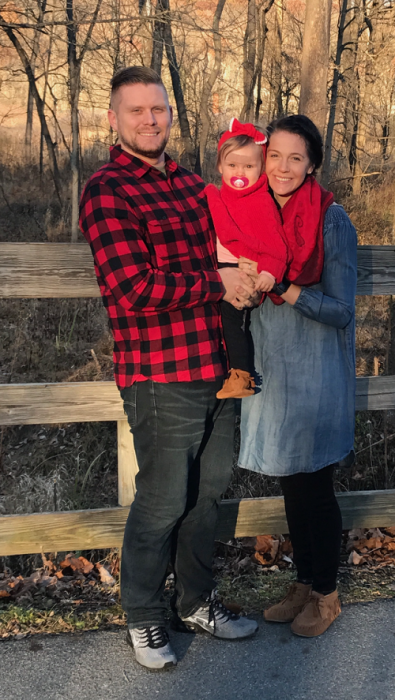 Philip, Sarah, and Lucy at 20 weeks of pregnancy, shortly before Joseph was stillborn.

At first, the pregnancy seemed normal. At 20 weeks, Philip and Lucy went with Sarah for the anatomy ultrasound, Sarah sporting a “big sister” shirt. They all couldn’t wait to find out if they would be welcoming a little boy, or another little girl. But sadly, they were about to be given devastating news.

“The ultrasound technician began and didn’t say much, but I jokingly asked, ‘Is he over to the right side? I feel pressure on my right side a lot lately,’ and she just said, ‘Yeah,’ turned off the machine and said she’d be right back and left the room,” Sarah recalled.

READ: Mom of stillborn baby boy: ‘These are our children from conception’

“I knew something was wrong. I turned to my husband and said, ‘Something isn’t right.’ Philip assured me that everything was OK, and she would have said something if it wasn’t. I said, ‘No, with Lucy there was moving and kicking at this stage, and the baby did not move.’ Minutes later, the doctor came in to tell us the baby had passed, that she was sorry for our loss, and gave us our options. It was a whirlwind of tears for a while after that.”

The first recommendation made to Sarah was a D&E, or a dilation and evacuation, procedure. Commonly used for abortion, that option was immediately distasteful for Sarah.

“The child is ripped piece by piece from the uterus,” she said. “At the time, and caught off guard, this seemed contrary to our Catholic faith. Even though Joseph was already dead, to disrespect his body like that seemed barbaric and unnecessary, and went against our conscience. I have since looked into the ethics of the church regarding similar situations, and what is most important is that the child’s remains are returned to the parents for burial.”

Sarah wasn’t pressured to have a D&E, but it was the very first option given to her, and it was presented as what was the easier, and better, decision. Still, her medical team supported her decision to deliver her baby. “When we said we would have our baby, there wasn’t any backlash, just support,” she said. “It did bother me that the first and encouraged option is D&E, because I know in the confusion of it all, many mothers would take it without really having a chance to think.”

READ: Parents of stillborn baby told daughter would be cremated with ‘other medical waste’

When it came time to deliver Joseph, both Philip and Sarah’s parents came to be with them, with her dad even flying in from out of town. She was admitted at 7:00 in the evening, and at 6:56 the next morning, Joseph had been delivered. “After he was born, our parents and Lucy came in to meet him and hold him,” she said. “There was a ministry who had made baskets, blankets, and small hats for stillborn babies. We felt so incredibly thankful to whoever made that little set for him.”

After he was delivered, the next decision was what they would call him. “We all talked about choosing his name, and the blessings he had already brought our family with his short little life,” she said. “I will never forget how bittersweet it was to pass around our new son to meet everyone, knowing we wouldn’t really meet him until Heaven one day. We held him until 11 AM, when a priest came in to see us and pray with us, and a representative from the funeral home we chose came to pick up our Joseph. My dad walked him down to the car with the funeral home director to make sure he got there safe. He was buried two days later, still in his basket, placed inside the tiny casket, in the infants and babies section of Holy Cross Cemetery in Akron.” 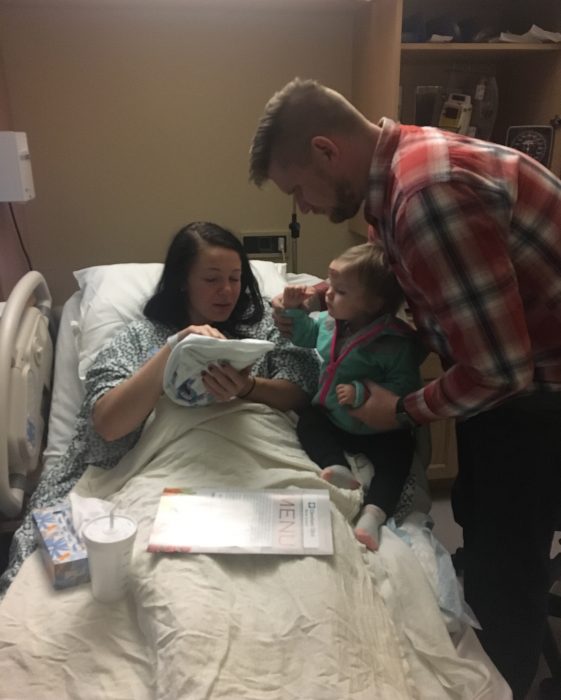 Choosing the best option for a stillborn baby is immensely difficult, and also incredibly personal. But Sarah knew exactly what she felt best honored the life of her son. “For my husband and I, giving birth to our son was the only option,” she said. “You never expect to be in the situation where the child you are carrying and have yet to meet is dead inside of you. Yes, part of me feared to my core the thought of going through the pain of labor, knowing what was on the other side. Then, I thought of my son.”

It was all for my son and so we could meet him, see him, hold him, bury him. We wanted to give him a story. He now has a birth story just like his sister, that is special and unique to Philip and I. Something that should have been so profoundly heartbreaking, (and was at times) ended up being so beautiful and a celebration of his short life! I was the only one who knew him alive and felt his movements, but I was able to introduce him to my husband, his sister, and his grandparents. Everyone was in the room throughout my labor with Joseph, and because he was already gone, I was able to take pain medication to keep me comfortable throughout the entire process. The nurses and hospital staff at Akron General Hospital here in Ohio treated us and Joseph with the utmost respect and dignity, and thoroughly respected our wishes throughout the entire difficult situation.

And for other mothers with stillborn babies, Sarah wants them to know that meeting their child can be healing. “I encourage you to meet your child. Bury your child,” she said. “Most importantly, TALK about your child. Do not feel guilty or awkward to talk about your son or daughter, because they lived and died and they are a part of your family.”

“One of my biggest fears after Joseph’s death is that I would forget him,” she added. “I would forget his face and everything in that terrible 24 hours. I have a few pictures, yes, but the more I let myself talk about him and best of all, ask him to pray for us from heaven, it keeps him alive in my heart.”

The family is now expecting their third child, due in December. But Joseph will always be a part of them, and their beliefs help give them hope. “My husband said something that will always stick with me, and really is the brightest side of a dark situation,” she recalled. “He said, ‘Our job as husband and wife is to get each other to heaven, and then do our very best to get each of our children there. We already have gotten one there, and he will be able to watch over us and pray for us until we see him again.'”