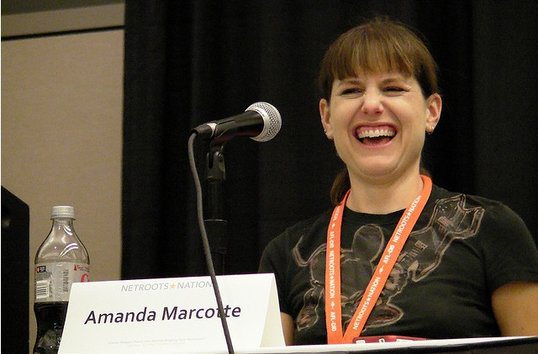 At Salon, our old pal Amanda Marcotte takes umbrage at a recent Slate piece by Ruth Graham highlighting the rise of young, female, and secular pro-life activists who confound the stereotype of pro-lifers as old, male, sex-obsessed religious nuts—the very stereotype that happens to be Amanda’s bread and butter.

Fearful that that without a straw man to endlessly tear down she might have to start thinking about and discussing pro-lifers’ actual arguments, Marcotte insists that the movement against abortion “is anything but secular or progressive,” and is still comprised of “the same old anti-feminist sex scolds they’ve always been”:

Graham interviewed Destiny Herndon-De La Rosa, who has clearly studied the hipster feminist aesthetic and imitates it pretty well. But when one digs past her use of Rosie the Riveter images and her willingness to curse, Herndon-De Le Rosa’s rhetoric is revealed to be standard right-wing misogyny. She has called feminists “hysterical, entitled twats” who “are polishing up their victimhood, parading it around and calling it feminism.”

But as Herndon-De Le Rosa reveals here, those quotes (a) aren’t from her, and (b) are completely misrepresented. They actually come from this article on her group’s website, by Kristen Walker Hatten. Further, the first quote actually says (emphasis added) that the founders of true feminism “went to great lengths to see to it that women were recognized as intelligent people of sound mind who deserved equal rights like property ownership and suffrage, not hysterical, entitled twats,” and the second is referring not to feminists, but to “fauxminists,” extremist advocates for causes like abortion, who espouse “the opposite of feminism.”

Salon: where fact-checking is optional!

Marcotte next absurdly accuses Herndon-De La Rosa of believing consensual sex is “an evil male plot foisted on women too stupid to know better” and “a degrading act that no woman actually wants and that women merely endure so as to gain that brass ring of marriage and a baby.” Marcotte’s sole piece of evidence: a quote from New Wave Feminists’ “About” page:

Sometime before we were born our womanhood was traded for a handful of birth control pills, the ‘privilege’ to degrade ourselves in playboy, and the ‘right’ to abort our children.

Marcotte’s not even trying to be subtle about making stuff up here. Posing for Playboy is the only thing described as “degrading,” so how on Earth does that get Marcotte to “sex is degrading” or “no woman wants sex”? (It’s an even dumber straw man than the time she equated having three or more sexual partners with “the idea that a woman might not marry the first boy she kisses.”)

Herndon-De La Rosa’s attempts to spin the anti-choice view as a rejection of male control and authority are particularly hard to swallow, given her own story about why she gave up contraception.

But Herndon-De Le Rosa points out that again, Marcotte has attributed to her an article by someone else, Danielle Lipp.

Even so, the sentences immediately beyond what Marcotte quotes reveal that Lipp’s entire rationale for rejecting hormonal birth control was learning about its abortifacient functionality—not religion, not “sex is only for babies” (indeed, Lipp goes on to discuss how she and her husband decided on a different method to avoiding pregnancy), but the same secular reality behind abortion opposition.

Folks, I’m beginning to think Marcotte might have an honesty problem…

“This is what ‘bro-choice’ looks like and means for the men who want to ‘game the system’ and use women for meaningless sexual escapades,” [Life Matters Journal’s Aimee] Murphy wrote in 2013.

Abortion matters to men, she added, because “without it, they’d get stuck with ‘sluts’ and have to face the consequences of their actions — and maybe treat women with the respect they deserve.”

To most people, it’s obviously true (and backed up by extensive coverage here) that abortion is extremely useful to the sort of men who want to avoid any possible obligation to the women they have sex with. But all Marcotte can process is “forc[ing women] to give birth simply to punish men for sleeping around,” to the point where she absurdly suggests Murphy is “skeptical” of the “possibility” that women would ever have sex “for reasons outside of husband snagging.”

Marcotte also suggests that because Murphy and some of Secular Pro-Life’s authors are Christians, their positions can’t be secular. That’s nonsense for three reasons: (1) polling and pro-abortion “religious” advocacy prove that religious affiliation doesn’t automatically determine one’s abortion views, (2) trends in public opinion confirm that opposition to abortion doesn’t automatically correspond to the stereotypical “religious Right” position on other issues, and most importantly, (3) you can’t dismiss the secular argument without refuting it—and unfortunately for Marcotte, the factual basis for it is scientifically, objectively, irrefutably, obviously true.

The whole thing has a strong whiff of a Potemkin movement that’s less about genuine organizing and more about creating the illusion of secular anti-abortion sentiment, an illusion necessary to hoodwink courts and the public into believing that anti-choice laws can exist without violating people’s religious freedom.

As if we needed a reminder that abortion advocates don’t understand how the Constitution works. Such an “illusion” wouldn’t be necessary because (1) as explained above, secular science identifies preborn babies as living humans, (2) the Constitution was written to protect all humans regardless of developmental stage; (3) the Constitution contains no right to abortion (don’t believe me? Ask your own side’s scholars), and (4) “sentiment” supporting or opposing a given policy does not define its constitutional status.

But hey, other than all that…good point.

Marcotte’s final piece of “evidence” is that Secular Pro-Life leader Kelsey Hazzard wrote an article “about a woman who supposedly tested her fertility by becoming pregnant by a man she had no intention of marrying and then aborted the fetus.” Marcotte takes this as evidence that even a pro-lifer she concedes is “not religious” is still driven by puritanical sexual mores, not concern for babies.

But even in the quote Marcotte cherry-picks—“So much for all women treating abortion with the gravity and seriousness it deserves”—Hazzard’s actual point is clear: debunking the infernal pro-abortion talking point that “no woman ever takes the choice to abort lightly, and how dare you suggest it’s even possible?!” Hazzard was shedding light on the abortion lobby’s broad brush, not painting with her own.

Marcotte closes by suggesting the emphasis on secular arguments against abortion is just “wishful thinking,” a futile search for new “scintillating arguments that will destroy legal abortion forever.”

So, so wrong. Pro-lifers already have all the arguments we need… and deep down, abortion advocates like Marcotte already know it. How can we tell they believe our arguments would destroy theirs? Because from diatribes about “punishing sex” and controlling women to Marcotte’s very column, many abortion advocates have made a career out of making up excuses to not talk about them.