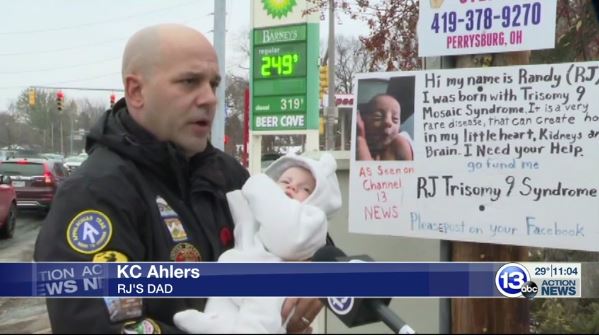 Four-month-old RJ Ahlers is battling several rare disorders, and his family turned to the community for help in getting RJ the specialized care he requires. But one community member responded with a horrific sign that called for RJ’s death.

In response to the brutal message, RJ’s dad, KC Alhers told WTVG, “It shocked me. I mean it really shocked me that somebody would have that kind of cruelty.” Alhers had posted six signs around the Franklin Park Mall in Toledo, Ohio, describing his son’s medical challenges and offering a place to give donations. When Ahlers returned to the mall he found the cruel sign. He said, “I came out. I saw it. Immediately took the one down. There were other ones that were up, but somebody, some other good Samaritans kicked them down.”

According to Fox News, RJ was diagnosed with Agenesis of the Corpus Callosum, which impacts his brain. He also has Mosaic Trisomy 9 Syndrome, which is a rare chromosome disorder and a hole in his heart. RJ sees six specialists to help him.

The inhumane sign telling a family struggling with a medically vulnerable child to “let the baby die” is, unfortunately, a common response families of babies with a disability or medical condition receive. If a genetic condition of disability is detected before birth, parents are often told to end their child’s life in abortion instead of allowing a child who may have a life-limiting condition be born.

What the person who posted the sign targeting the Ahlers family fails to see is that this is not “Darwinism” or some passive evolution taking place. This is eugenics, the deliberate killing of people who are judged to be less than perfect or arbitrarily seen to have an inferior quality of life.

Often, when people say we should “let the baby die,” they are not talking about letting nature take its course, but instead, actively ending an innocent and defenseless life through poisonous injection or the withholding of food and water.

“We want to raise our son to not reciprocate hatred. We want to battle hatred with love. So, we obviously know somebody that did this is disturbed and we hope they get help. But, we’re going to keep taking your signs down as we see them because this town doesn’t need hatred. This town needs love,” Ahlers told WTVG.

Despite the obvious discrimination they are facing, the Ahlers family has received otherwise universally supportive responses. In October, they hosted a fundraiser that brought in $4,000 to be used for expensive genetic testing, and they will host another fundraiser in December. “I was actually very impressed and touched by the outpouring of love that the Toledo community, our fellow Toledoans, showed us,” RJ’s father said.