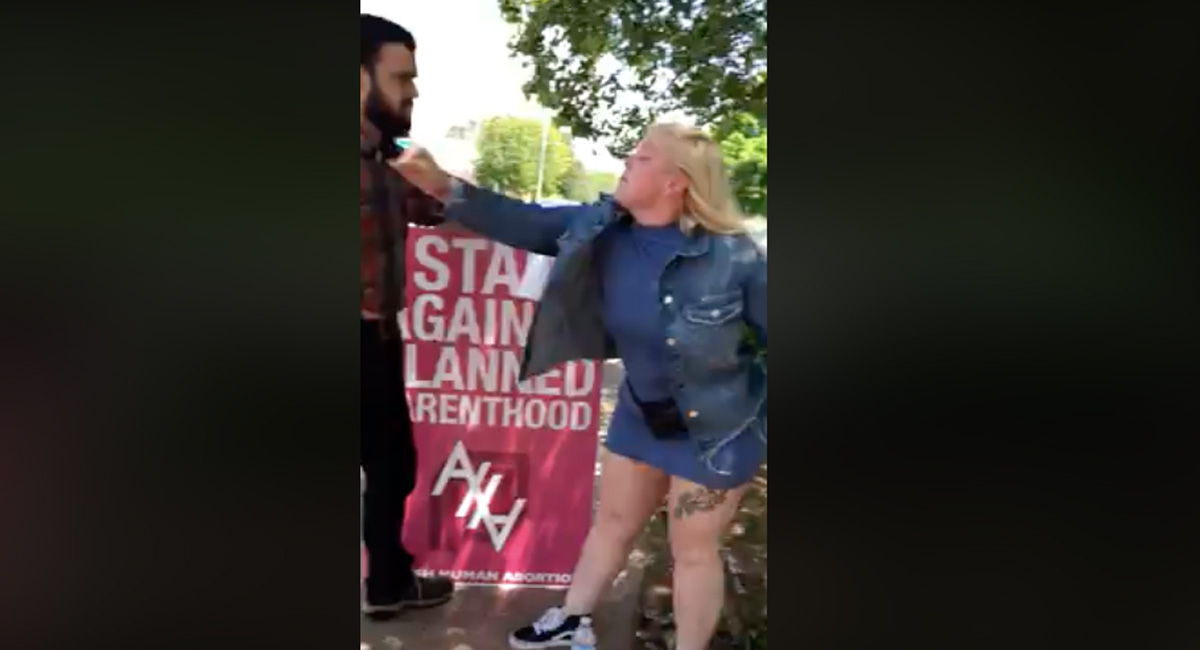 Mary Baggett, a sidewalk counselor in Huntsville, Alabama, was attacked outside of the Alabama Women’s Center abortion facility on May 3, 2019, and the assault was caught on video. Baggett was standing on the sidewalk, talking to other pro-lifers, when a car approached, and the driver began yelling at them as Baggett filmed. Another driver, a woman, also began yelling, and then exited her vehicle and charged at them.

As Baggett continued to film, the woman repeatedly insisted that she did not give them permission to be recorded, as Baggett explained that she was already live. The young woman first reached out for the male pro-lifer seen in the video, and then turned her attention on Baggett, swinging violently at her and sending the camera flying.

In an exclusive interview with Live Action News, Baggett explained what happened that day.

“The woman who came up to me punched my hands. I must have been holding the camera with both hands, cause one is bruised pretty bad but the one hand I hold the phone with is hurting too,” she said. “Then she grabbed my phone and ran to her car. I went after her and demanded she give me the phone back [and she] finally threw it in the grass.”

After Baggett found her phone, she went to retrieve it, but the abortion facility escorts began yelling at her that she was breaking the law and needed to leave. “The man who was in the first car, who she was with apparently, he came back before the police showed up,” Baggett continued. “I thought he was going to try to harm us so I started taking his picture and telling him the police were on the way. He left in a hurry. I called the police and filed a report.”

Robert Mog, who was not with Baggett when the attack happened, said they are currently trying to find the woman’s license plate number, and they believe she might be from North Carolina. While the pro-life group sprang into action quickly, tending to Baggett’s hands and calling the police, it was still a stressful experience.

“Mary was definitely emotionally shook up – she wasn’t even initially focusing on the drivers when the incident happened, and it happened pretty quickly, or seemed to,” Mog said.

According to both Baggett and Mog, there has been an increase in violence and hostility towards pro-lifers, and they believe it is due to the facility’s escorts. “These clinic escorts are trying to incite people to violence against us, in my opinion,” Baggett said. “The week before this happened, one of the clinic escorts called her former NFL husband to come and verbally assault me. He is huge and it was scary. I called the police on to the scene and made a report about that too.”

“We believe that the escorts riled her up into doing this – you can see one filming from behind,” Mog agreed. “They have been doing that a lot lately.”

This attack is the latest in a string of violence directed at pro-lifers across the country, violence that is largely ignored by mainstream media outlets and never acknowledged by abortion advocates. Yet as these attacks continue to take place, it becomes more important than ever for pro-lifers to exercise caution — and always have recording devices at the ready — as they engage in sidewalk counseling or pro-life protests.