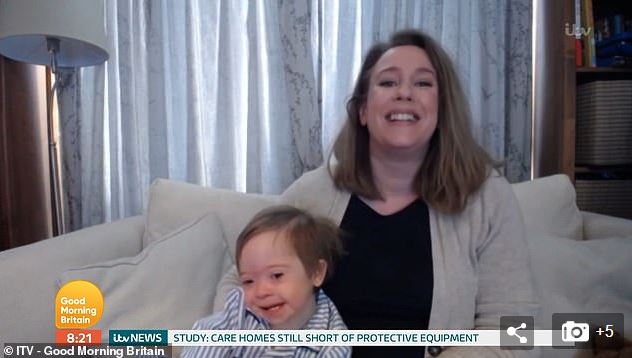 A woman in the UK who was diagnosed with breast cancer and COVID-19 while pregnant said she was inspired to fight for her life by her sons — one who has Down syndrome and one who is still in the womb.

Sally Nuza appeared on Good Morning Britain last week to discuss her health challenges during pregnancy, including receiving a diagnosis of breast cancer while seven months pregnant followed quickly by a diagnosis of coronavirus as well.

“It was scary obviously but I think I only had stage two cancer so that’s really positive,” she explained. “So while it was scary, it was a question of how to handle it and all the things I had to do to get on with it.”

COVID-19 made it difficult for her to breathe, and that, she said, “was terrifying.” She thanked doctors Ruth Davis and Helen Walker for saving her life.

“Over the last six weeks, there have been so many professionals dedicated to making sure me and my baby are safe,” she said. “There are really no words. They are my angels, they’re far more than heroes. They have been extraordinary and I can’t thank them enough.”

READ: Baby Illianna was born healthy after her mother received chemotherapy for breast cancer during pregnancy

Nuza, whose two-year-old son Jack has Down syndrome, said that both he and her preborn son helped her get through the frightening diagnoses. “I think actually it’s my sons who keep me going,” she said. “They are such incredible fighters. Jack has Down’s syndrome. He’s had medical interventions for about two years and is the most positive and relaxed child you will ever meet. He was my first child and when it came to my second, he had to survive with me through cancer and coronavirus and is a perfectly healthy baby. So I just concentrate on them really.”

She added that she had a difficult time becoming pregnant and she saw it as a “miracle” that she was even able to become pregnant a second time.

Despite two very serious diagnoses, abortion — the intentional killing of a child in the womb — was not necessary to save Nuza’s health or life, and is actually never medically necessary.