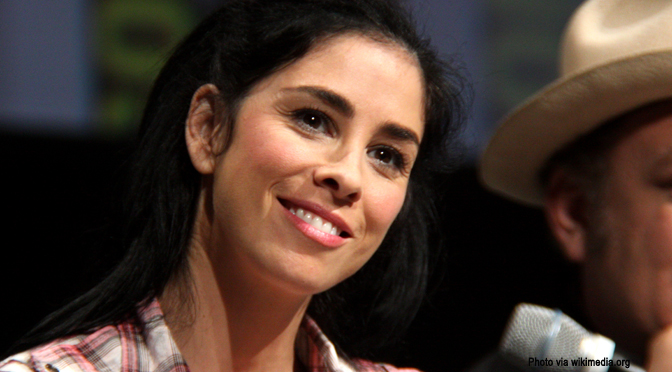 Pro-abortion celebrity and alleged comedian Sarah Silverman may know she wants to #StandWithPP despite their nightmarish organ-harvesting side business, but if the following string of tweets (hat tip to Mediaite for the first) is anything to go by, she still doesn’t quiiiiite grasp the ethics involved:

Abortion is still legal in the great U.S of A. It would be insane not to use fetal tissue 4 science & education in such cases. #StandwithPP

Except for the small detail that organs (not tissue) donated to researchers or medical schools are, y’know, donated. Hospitals can’t just take out whatever might be useful whenever somebody dies; they have to check whether the deceased chose to be an organ donor first. And getting those organs by killing their previous owner is widely understood to be a particularly heinous crime… at least, when the victim has already been born. In other words, “science & education” are not good enough reasons to violate someone’s bodily autonomy without their consent. If this sounds familiar, that’s because it happens to be the central philosophical argument for pro-aborts’ own position. Often they even refer to pregnancy without the option to abort as a “forced donation!” But while there are a host of reasons why bodily autonomy doesn’t cover intentionally killing a child, taking organs without that child’s consent really is the kind of infringement Silverman’s side claims pro-life laws are on women.

But wait, you might say, parents can make the decision to donate for children too young to consent. Is this any different? Very. Again, parents can’t have their children killed to get their organs. But more interestingly to this analogy, you can only make it by conceding that the abortion seeker is indeed a parent to what she wants aborted…raising deeply problematic questions about what she and Planned Parenthood are doing in the first place.

We’re not gonna go through the same nonsense we went through to use stem cells for research are we? Science is real Dolls #StandwithPP — Sarah Silverman (@SarahKSilverman) July 28, 2015

Poor Sarah must not have been paying attention when destroying embryos to obtain stem cells was declared obsolete way back in 2009, or last year when Harvard researchers demonstrated a new method for giving adult stem cells the useful traits of embryonic ones, no killing necessary. Yes, “doll,” science is indeed real… and you seem woefully unacquainted with it.

Anyway, she’s both right and wrong about OrganGate’s similarity to the embryonic stem debate, but in neither case are the opinions she deplores nonsense. It’s similar because embryos are just as alive and human as you, Sarah Silverman, or me, no matter how different they look, making it just as wrong to kill them. But it’s different because the babies Planned Parenthood officials are talking about killing in the undercover tapes are far more developed than embryos. They have to be for their organs to be identifiable and useful. Indeed, that’s why Planned Parenthood has to illegally perform partial-birth abortions to get them.

Judging by how popular support for elective abortion nosedives after the first trimester, many of Silverman’s own fans would probably have a much bigger problem if they knew the truth.

Killing Jews was legal in Nazi Germany. It would have been insane not to use their skin for lamps. https://t.co/55lO9bg4SX

We just have dif views doll u don’t have to be cunty about it https://t.co/nep9Jfy5im

If Silverman knew more about history she might have reacted with something a little deeper than “foul-mouthed teenager.” As National Review pointed out over the weekend, the Nazis really did use the same logic, with German scientist Julius Hallervorden commenting in 1945 at the Nuremberg trials, “If you are going to kill all these people, at least take the brains out so that the material may be utilized.”

The more America sees of the Planned Parenthood behind the women’s health platitudes, the harder it gets to deny their evil. But a few, it seems, are committed to saying in denial until they’re the only ones left.