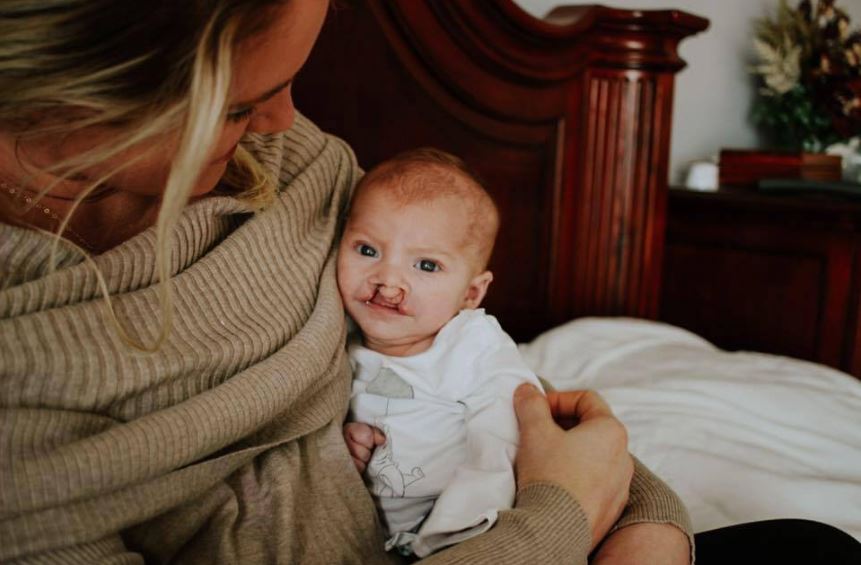 At 24 weeks pregnant, Sara Heller and Chris Eidam learned that their baby boy had a cleft lip and palate. Doctors asked them if they wanted to have an abortion, but the couple refused. After their son was born, people began to comment on his face, but then one stranger gave the new parents an amazing gift.

“They asked us if we wanted to keep the pregnancy,” Eidam told News 6. He and Heller didn’t even question it; they knew immediately they would not abort their son. Baby Brody was safe in his mother’s womb, but he had a bilateral cleft lip and palate along with a chromosome deletion, of which doctors told his parents there are only nine other known cases in the world.

We were able to see our little guy today. His bilateral cleft lip is more obvious today than in previous scans but I can't help but think he is the cutest baby on earth (or in the womb). So in love with our little (2lbs 12oz) guy! #1in700 #cleftlipandpalate

Brody would need to have surgery to correct the cleft lip and palate so he would be able to eat and learn to speak. As they began posting proud pictures of their son on social media, rude comments began to come in. One person flat out asked, “What’s wrong with your son’s face?” They were caught off guard and began to wonder if he would always face bullying in his life.

“He’s three months old and being bullied?” Heller said. “My job as his parent and advocate is to tell his story.” Rather than start a fight, she sent a link to the person that explained cleft palates so she could educate him and others.

“It is OK to be proud of your baby no matter the circumstances,” Heller told TODAY. “We wanted to change what ultrasound/newborn/first year pictures on our Facebook/Instagram accounts looked like. We wanted to spread awareness of cleft lips and palates.”

In honor of #MNF , selfie with Tom Brody.

One night, Heller was in a restaurant with friends and little Brody. The server handed her a note from a stranger, but it turned out to be much more than a note.

“I’m just thinking, what could this be? It’s probably some nice message on a napkin,” said Heller. “It was a check!”

The check was for $1,000 and the memo said, “For your beautiful baby.” The new parents decided to use the money to help cover the cost of Brody’s surgeries and have spent the last couple of years sharing his images proudly.

“The generosity of a complete stranger restored our faith in humanity,” Heller told TODAY. “Being Brody’s parent has taught me that people care. Strangers all over the country want to hear his story, and they want to pray for him.”

According to the Centers for Disease Control, 1 in 1,600 babies is born each year in the United States with a cleft lip and palate. There are a variety of factors that may contribute to the development of a cleft lip or palate or both. Brody has also been diagnosed with autism.

GOD IS GOOD! After a long 15 month wait on the waitlist Brody’s name has finally reached the top of list for the ONLY autism / ABA therapy based pre-school in Omaha. I took Brody to tour it today and he left with tears only because he didn’t want to leave!! I was also very impressed with the facility and I cannot wait for him to start. 💙 Cheers to adding even more to our crazy schedule! #aba #asd #toomanyinitials #autism #prek #hoursonhours

Thanks to the generosity of strangers and his parents’ decision to fight for him, Brody has a great future ahead. “I hope that he continues to be our special perfect boy and that someday he can do something great for someone,” said Heller.