Nonsense arguments, but they’re pervasive. Know how to counter them!

“A Fetus Is Not a Human Being”

For many who are in favor of legal abortion, a zygote, an embryo, and a fetus are potential human beings, but not actual human beings. They argue this invalid point despite the fact that from the moment of fertilization, a fertilized egg has his or her own unique DNA, different from any other human being on the planet, with everything from eye color to sex already determined. According to a popular pro-choice brochure, A Fetus is Not a Baby:

But a “human being” is defined as “any individual of the genus Homo, especially a member of the species Homo sapiens; a person, especially as distinguished from other animals or as representing the human species.” There isn’t a definition of “human being” that excludes the unborn.

Additionally, many pro-choicers refer to a fetus as a seed, often comparing fetuses to chicken eggs and acorns. A.S.K. wrote in What is an Abortion and Why Women Must Have the Right to Choose:

Is it true that a fetus is a form of life? Of course it is. It is made up of live cells, it is growing and processing energy, it has the capacity to mature and reproduce, it has a genetic system and so on.

Will an abortion destroy this form of life? Yes, absolutely.

Well then, isn’t an abortion killing another human being? No, absolutely not. 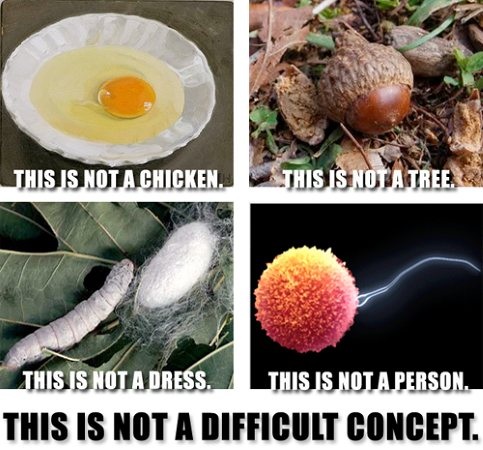 First, born children have the “capacity to mature and reproduce.” but they haven’t reached that stage of development yet. Does that make a 10-year-old less human? Second, unlike a zygote, an embryo, or a fetus, an acorn or any other seed is nothing like a human fetus. An acorn is more like a human egg. In order for the acorn to become a tree, germination must take place, just as in order for a human egg to become a human being, fertilization must take place. The comparison is therefore nonsense. As for the chicken egg, it is not a chicken, that’s true, just as a human egg is not a human being. After fertilization, a chicken egg becomes an unborn chicken and a human egg becomes an unborn human being.

Human embryos, whether they are formed by fertilization (natural or in vitro) or by successful somatic-cell nuclear transfer (SCNT — i.e., cloning), do have the internal resources and active disposition to develop themselves to the mature stage of a human organism, requiring only a suitable environment and nutrition. In fact, scientists distinguish embryos from other cells or clusters of cells precisely by their self-directed, integral functioning — their organismal behavior. Thus, human embryos are what the embryology textbooks say they are, namely, human organisms — living individuals of the human species — at the earliest developmental stage.

“A Fetus is Not a Person”

Science and advances in technology have been able to prove repeatedly that a fetus is in fact a separate life and a separate human being from his or her mother. A common pro-choice argument in response to this fact is that while the fetus is a human being, he or she is not legally a person and therefore is not entitled to the same rights that you and I enjoy – mainly the right to life.

This is an argument we’ve heard before. Walter B. Hoye writes the following:

[T]he slaves were considered property, not people, and were treated as such. The killing of a slave was almost never regarded as murder, and the rape of slave women was treated as a form of trespassing […]

From 1815 to 1830, the American Colonization Society: ‘Free black in our country are … a contagion.’

In 1857 the U.S. Supreme Court decided: ‘A negro of the African race was regarded … as an article of property … a subordinate and inferior class of being.’

In 1858, the Virginia Supreme Court decision declared: ‘In the eyes of the law … the slave is not a person.’

In 1900, Professor Charles Carroll: ‘The negro is … one of the lower animals.’

In 1903 Dr. William English: ‘The negro race is … a heritage of organic and psychic debris.’

Human fetus at 7 weeks of development.

Sound familiar? Pro-choicers hurl similar statements about unborn human beings every day. Despite knowing that fetuses are human beings, pro-choicers simply don’t believe they are human beings who are persons deserving of rights under our laws. They say that deaths of fetuses don’t matter and are therefore not murder. They say that since fetuses are inside the womb, they are parasites. They believe that fetuses are just tissue and cells. It’s important to note that these are just the subjective opinions of pro-choicers, not facts, just as pro-slavery beliefs were just opinions. None of the arguments are based on facts.

Thankfully for African slaves, some Americans stood up for them and after decades of arguing and warfare, marches, and demonstrations, African-Americans finally received the rights that they deserve as human beings. It’s been over 35 years since Roe v. Wade, but we still have a long way to go to win the rights of unborn humans. But it will happen.

Fetuses are human beings – this we know. But until our government recognizes them as persons, the war against legal abortion will not be won.