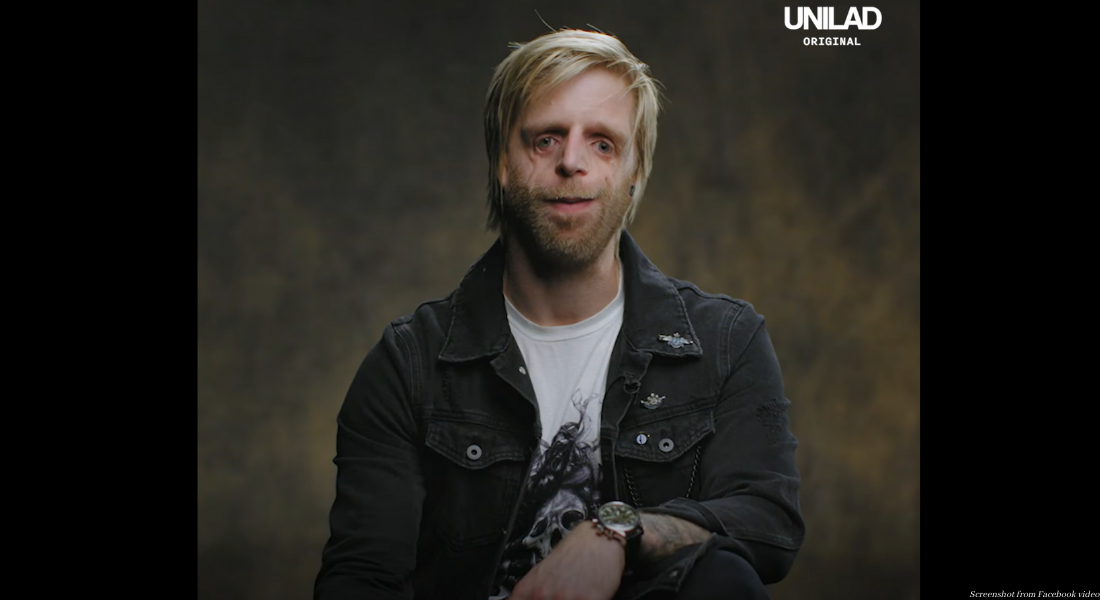 A man born with Treacher Collins Syndrome (TCS) was abandoned by his parents at the hospital because of his face. Though that caused him pain well into adulthood, he’s since found love and acceptance for himself, and is spreading that message to others.

A recent video from LADBible featured an interview with the man, who goes by Jono Lancaster on social media.

“My adoption report says that ‘Jonathan Lancaster was born on the 31st of the 10th, 1984,'” he states in the video. “‘Both parents were horrified by the child’s appearance. Both parents felt no maternal bond. Both parents left the hospital 36 hours later, leaving the child behind.’ And those words, you know, it’s something that’s… that’s obviously stuck with me, and you know, when I had angrier periods in my life, I focused on those words a lot, and they cut deep.”

TCS is a genetic disorder which most often affects the cheek bones, jaw, chin, and ears. Though some children may need therapy and surgeries and the condition is incurable, life expectancy is the same as for typical peers, and people with TCS can live normal lives. The only difference is in the person’s appearance — and unfortunately, that can be enough to scare some people away.

READ: ‘There was just no question.’ Parents refused abortion for baby with craniofacial syndrome

“I wasn’t born with any cheekbones, so that’s why my eyes appear the way they do. I wasn’t born with all the parts of my ear, so I’ve got the — I call them my little Bart Simpson ears. It’s also affected my jaw, so my jaw is a little receded, and that’s about it, really, for Treacher Collins,” Lancaster explained in the video.

Yet the woman who eventually became his mother helped give him the strength he would need to embrace himself later. “At the age of five, on the 18th of May, 1990, I was adopted by an incredible woman called Jean,” he said. “She never shied away from a conversation, even the difficult ones about my face and my birth parents. And yeah, she just gave me this incredible foundation, this incredible love for me to live.”

Eventually, as an adult, Lancaster began to consider attempting to meet his biological parents.

“I always wanted to ask them questions. I always wanted to know why. There were so many things I wanted to say and share with them. And then, in my darkest days, I wanted to hurt them as much as I was hurting, too,” he said. “So when I’m 24, 25, I’d reached the point where I wanted to reach out to my birth parents. I wanted to let them know that we’re okay, and if they’re open to meet me, then that would be incredible. So we shared that with them through a letter.”

Unfortunately, Lancaster didn’t receive the response he had hoped for.

“A week or so later, we got a letter back, very clear regarding this subject, ‘We do not wish any contact. Further attempts will be ignored,'” he said. “They both signed it, and that was it. You know, I cried and I felt rejected all over again, but again, thinking about my birth parents, you know, it’s… they made that decision all them years ago, and they’ve decided to stick by that. They’ve done what they felt was best for them, and I respect that. And at the end of the day, I will always come back to, those two human beings gave me life, and for that, I am forever grateful.”

READ: Baby’s birth mother decides to keep her after adoptive mother rejects her

Today, Lancaster is the founder of the Love Me Love My Face Foundation, which raises awareness and gives support to people with TCS, and other craniofacial conditions. He’s also a public speaker, and has raised over $400,000 for the craniofacial community. And despite their rejection, he still thinks about his biological parents. “Every milestone that I have in life, I tend to think about them,” he said. “But I guess the ultimate things I want to share with my birth parents is that I am happy, and I’m okay, and I’m healthy, and I hope you are too.”

Now, after battling depression and insecurity for much of his life, Lancaster is dedicated to helping people find ways to love themselves.