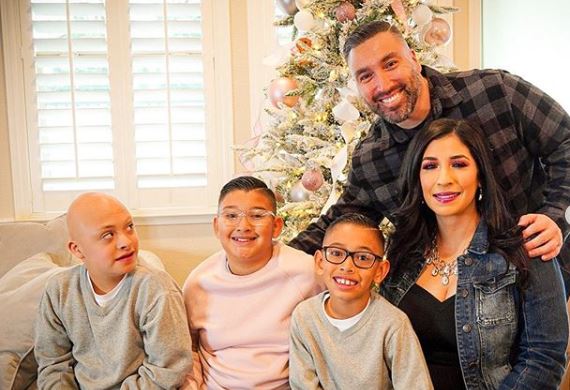 Five months pregnant with her first baby, Desiree Rossette was heading out the door to a wedding when she happened to notice she had a message on the answering machine. The message was from the hospital, and it would change her life, though she didn’t think much of it at the time. The test results the doctor wanted to discuss would lead him to call for an abortion against her wishes. Rossette’s blood test had come back revealing that her baby had a one in 30 chance of having Down syndrome.

Then, during an ultrasound, the doctor noticed white spots on the baby’s heart along with other characteristics that can sometimes point to Down syndrome.

Oh this sweet boy of mine, there’s so much to say💛💙 We found out we were expecting in June of 2006. In Sept. of 2006 I received a message on the answering machine that a blood test I took came out positive. They didn’t say for what but that we had to go in to the hospital. We spoke to a genetic counselor and she told us our child tested positive for Down syndrome. Because of that, we had a 1 in 30 chance of him being born with Down syndrome, and that sometimes there could be false positives. I was a little shocked but we kept moving forward. Our doctor at the time seemed like a really nice man. We had a visit with him and he found some white spots in Dante during our ultrasound which could lead to heart defects. He also told us that if I kept Dante past 20 weeks we could both be at risk of passing away due to complications. Of course we were devastated and prayed. The next day I received a phone call from the abortion clinic to schedule an abortion. Again, I was devastated and told them I was not having an abortion. It turns out the doctor had called and made them schedule one for me. I spoke to the doctor and it turns out his wife was pregnant with a baby with Down syndrome and they aborted their baby. He said it would be too much of a burden to have a child with Down syndrome. Again, I was crying and devastated and couldn’t believe what I was hearing. At that point we made the decision to get a second opinion from a different doctor. With our second doctor, everything seemed so much better. Dante’s check ups were great, and his heart was perfect. At birth, I didn’t get to hold him right away because his temperature was low. He stayed under a heat lamp for about 30 minutes. After that it was pure joy. Dante has a love like no other. He was such a great baby and his schedule was so easy to follow. Dante had a few surgeries once he hit a year old. I can share those later. I just wanted to share with you all what we went through with him. It was so hard and shocking. He was our first baby and we went through so much with him. I cried a lot, not because he has Down syndrome but because of the bumpy road he was going to take. 💛💙 #downsyndrome

“After that ultrasound, he sat my husband and I down to discuss what our future held,” Rossette wrote in an essay for Love What Matters. “He said, ‘If you go past 20 weeks during pregnancy, there is a chance your son could pass away, along with you.’ I was sitting there in complete shock, sobbing like I never had before. He also said, ‘You could have an abortion, to at least save yourself.’ That is something I told myself I would never do.”

The family began to pray while at the same time planning a funeral for the baby boy, whom they named Dante. They were devastated but had no plans of having an abortion.

“A week later, I got a phone call from the abortion clinic to schedule an appointment,” wrote Rossette. “I was so upset I said some not very nice words and hung up. It turns out my doctor and his wife aborted their child with Down syndrome because he/she would be a burden. He thought I should do the same.”

This picture was taken in 2010 where we participated in our very first Step Up to Down syndrome walk. Also know as buddy walk. We received a banner for largest team to walk with Dante. The support was absolutely beautiful and we all wore our Team Dante shirts. Thank you all for your continuous support. ❤️❤️❤️❤️💙💛 #livelikedante #lovelikedante #downsyndrome #downsyndromeawareness #autism #autismawareness #livelikedantefoundation #reallifesuperheroes #specialneedssiblings #disabilityawareness #teamdante

Rossette never went to that doctor again and found a new group of “absolutely amazing” doctors. They welcomed her and her baby, gave her resources on Down syndrome, and said there was nothing “out of the ordinary” to be found on his ultrasound. Though she now regrets it because of the risk of miscarriage, she and her husband agreed on an amniocentesis to confirm the diagnosis of Down syndrome — an experience she called “horrific.” After the diagnosis was confirmed she said, “I wiped my tears, put on my mom cape, and went to work finding as many resources as possible.” She lined up the early intervention programs and therapies Dante would need.

READ: Why do abortion advocates oppose giving parents of children with Down syndrome accurate information?

During a routine check-up, doctors found that the cord was around Dante’s neck and labor was induced to save him. When she finally got to hold him, she said, “I couldn’t believe my eyes, I was holding an angel on Earth. He had the cutest face.”

Rossette had wanted to name her baby boy after her father, but her father said to name him Dante David because Dante means steadfast and enduring.

#Repost @dezrossette with @get_repost ・・・ October is Down syndrome awareness month, but with our little man, we celebrate everyday. I imagine what this world would be like if we all had a heart like Dante. He loves like no other, gives the best hugs, and he will never judge you. Thank you all for your continuous support throughout the years. Our life is nowhere near perfect but we are always here for anyone who needs us. #livelikedante #lovelikedante #inclusion #acceptance #endtherword #octoberisdownsyndromeawarenessmonth #downsyndromeawareness 😍😍😍😍😘😘😘🔥🔥🥰🥰🥰💙💛💙💛💙💛💙💛 shirts are coming in soon

Through the first year of his life, Dante underwent surgery for a hernia and to repair the holes in his heart. At age three he developed alopecia. By the time Dante was five, he had two little brothers named Rocco and Niko. Niko was diagnosed with autism.

Today, the family runs the Live Like Dante Foundation to raise money for schools, camps, and programs for children and adults with different health needs. Rossette helps many parents find peace with having a child with special needs, or who are expecting a child with Down syndrome. She encourages them and lets them know that everything will be okay.

“Over the years, we got talked about a lot, stared at, and our feelings were hurt many times,” wrote Rossette. “If I can say anything to the average family it’s this: please accept everyone for who they are. We can’t control what our lives bring us. Many people called me selfish for not aborting Dante. Please live with a kind heart, accept differences, and teach your children to love someone for who they are. Love begins and ends in the home. Children, especially children with special needs, are innocent and need to be loved and cared for like anyone else.”