In her 2021 book, Donna Grisham tells the traumatic story of being raped at age 16 by a stranger and becoming pregnant. When her mother found out about the pregnancy, she decided Donna would have an abortion and took her to Planned Parenthood in Birmingham, Alabama, for a late-term saline abortion.

During a saline abortion procedure, the preborn child is killed by an injection of a caustic saline solution, which poisons the baby and scalds him or her to death. Then the saline solution triggers labor. These abortions are still done today, though much less frequently, because they were risky for the mother and caused too many live births.

Late abortions are now usually carried out by the D&E method, which is described by a former abortionist in the video below:

According to Grisham, “The nurses at the clinic kept telling us, “It’s just a blob of tissue.”

In reality, at 25 weeks, Donna’s baby was fully formed. Babies born as young as 21 weeks are capable of surviving when give proper medical care.

Donna had no idea what to expect during the abortion. She didn’t know that she was going to go through actual labor. After the injection, she said she was sent to a hotel. She felt her baby kicking in her womb as he or she went through the burning effects of the saline. Grisham explained, “I began feeling extreme pain. I had no idea that it was contractions.”

Donna delivered her baby, dead, at Baptist Medical Center Hospital located next to the Planned Parenthood facility. The nurse failed to close the curtains around her bed, and she saw the dead body of her baby in a jar. Grisham said:

I knew it was my baby… I screamed at the top of my lungs. “I want my baby, I want my baby!” Nurses, doctors, and interns were running over to me to see what was happening. One by one they tried to quiet me. One was saying, “Hush, hush, hush, everything is going to be fine.”

Another was saying, “Stop making all that noise!” The doctor, with a stern look on his face and a sharp tone in his voice, said to the nurse, “Pull that curtain right now!” But that didn’t help. I had already seen the jar…

I was still pleading for them to give me my baby. The nurse came into the area, closed the curtain, and got right into my face and said, “Shut up! You’ll be just fine.” I kept sobbing and screaming until finally everything went black.

The workers drugged Donna and the next thing she knew, she was waking up in her mother’s car.

Emotionally traumatized, she isolated herself in her room and refused to talk to anyone. She said:

My life would never be the same… I went into a full-blown depression, and constant suicidal thoughts plagued my mind. I was so absorbed with those thoughts that I began acting on them.

I had countless nightmares of screaming babies drowning in their own blood as I tried to save them…The nightmares seemed so real…. I hated myself most for not fighting for my precious little baby. I began to think that I didn’t deserve to have a happy life, much less to live.

She was consumed with hatred for everyone involved in the abortion and she struggled to cope. 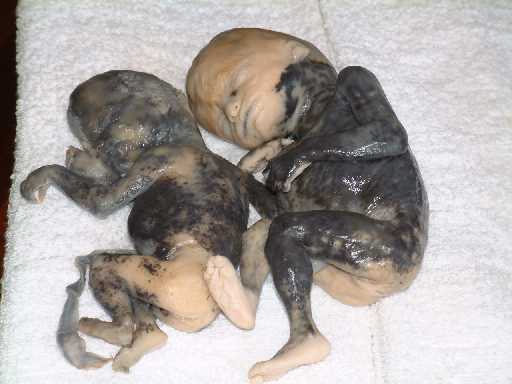 READ: Rape is a horrific trauma that abortion cannot heal

Unfortunately, this was not the last experience she would have with abortion. Several years later, she became pregnant again. When she told her boyfriend, he said, “I don’t care. Do whatever you have to do. Get rid of it!”

She tried to hide her pregnancy from her mother, but her mother found out. Her mother assured her everything would be all right, lulling Donna into a false sense of security. The next morning, her mother woke her up and said, “Let’s go shopping in Savannah.” She took Donna on what Donna thought was a shopping trip.

But her mother was really taking her to an abortion facility. She stopped at a building that had no sign and took Donna inside. Donna explained:

I opened the door and noticed the people sitting inside; they were young girls and women, only a few men. They looked very somber and pale, as if they had been crying. At that moment I knew what was happening. My first thought was, Oh no, not again! And I heard an audible voice inside of me say, “Run!”

But she didn’t run. She was too scared. She says, “I paid a terrible price for not speaking up and allowing myself to be coerced into this horror once again.” She had a suction dilation and curettage abortion in the first trimester. A former abortionist describes this type of abortion in the video below:

When the abortionist turned on the suction, Donna said she “heard bones crackling.” She began crying and begged them to stop the abortion. They refused. She started screaming, “Turn it off, turn it off! Stop! Stop!” But it was too late.

She said that on the abortion table:

Everything came rushing back at me: the rape and seeing my first baby in a jar. It all came crashing back like a nauseating horror movie, but it wasn’t a movie. It was real. My heart ached so much that I wished that I could just bleed to death right there on that table.

After the abortion, she attempted suicide. She experienced trauma and regret that affected her for years.

Donna eventually found healing after becoming a Christian. Many years later, her ex-boyfriend, the father of her second aborted baby, tearfully begged her forgiveness. The abortion had affected him, too.

Both of Donna’s abortions were coerced. A troubled, vulnerable teen coping with a traumatic rape and a previous abortion, she did not have the inner strength and the resources to oppose the second abortion. Her story illustrates the horror of abortion and how traumatic it is for women and girls, as well as the fact that many times, women are coerced or pressured into abortions. Studies show that 64% of women who have had an abortion felt pressured into it.

Donna’s story also illustrates that abortion isn’t the answer for rape survivors, as it causes them a second trauma.