A coalition of pro-life, pro-woman groups rallied outside of the U.S. Supreme Court today in support of pro-life legislation brought before the Court in the case of June Medical Services v. Russo (formerly June Medical Services v. Gee). The case centers around a 2014 law in Louisiana called Act 620, or “The Unsafe Abortion Act.” The law was created to ensure that women who suffer injuries during an abortion are able to receive appropriate medical care at a hospital. In order to provide women injured at abortion facilities with proper care, the abortionist committing the abortion must have admitting privileges at a hospital within 30 miles of the abortion facility.

The Protect Life Protect Women rally, emceed by Live Action’s Director of External Affairs Alison Centofante, featured women from Louisana who were injured during an abortion. They shared how Act 620 would have helped them.

“I had an abortion,” said Cindy Collins, founder of Louisiana Abortion Recovery. “The abortionist told me to ‘Get up, get out and to shut up.’ As I walked out of that abortion facility bloody and hemorrhaging, I laid outside in the grass with a bloody skirt and my blood was on the ground as well as the blood of my child. […] I’m hearing the same stories today. I counsel women almost every day and even on phone calls that tell me the same story. […] These abortionists are not being held to account. In Louisiana, there was even an ophthalmologist and a radiologist that were doing abortions. Women deserve better than that.”

We are live at the Protect Women, Protect Life rally at the Supreme Court

Joyce Brown shared the story of Laura, the daughter of Eileen Smith, who wrote her story for Brown to share. One day, Smith received a call from Laura, but it wasn’t her voice on the phone.

“There was screaming and sobbing on the other end by a voice I did not immediately recognize,” read Brown. “I heard the words: Laura, ER, and then the worst ones – not breathing, and then abortion. It was Laura’s friend Karen on the phone. She told me what happened, that Laura was having an abortion and something went terribly wrong.”

However, Laura, age 22 was already deceased before she left the abortion facility. She had begun to cough while under anesthesia, and the abortionist gave her more drugs. But all she needed was oxygen. The abortion facility did not have an anesthesiologist or a crash cart of CPR knowledge among any of the staff members despite the abortionist claiming he did. He was found responsible for Laura’s death and eventually lost his license but served just three months in prison. 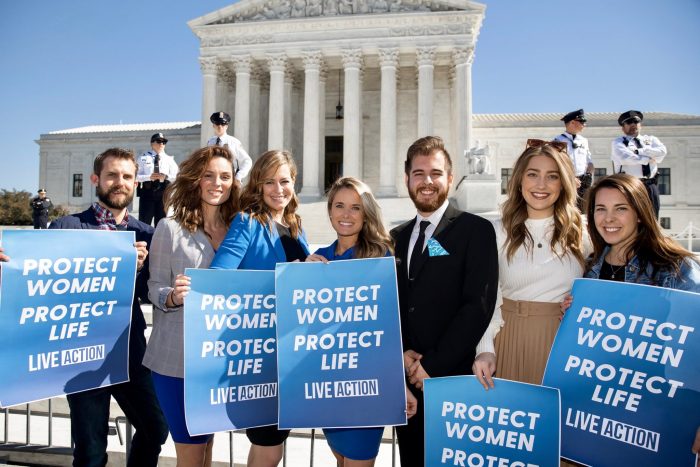 Pro-lifers at the rally include emcee Alison Centofante.

“I’m here today to celebrate with you, God’s greatest gift to all of us – life. As you know the Supreme Court is meeting this morning because Louisiana, and I’m very proud of this, is a pro-life state that is helping to lead our country’s pro-life movement,” said Sen. Kennedy. “[…] We have a lot of work to do, a lot of work to do, in fighting for the safety of women who have too often become the victims of an abortion agenda that cuts deals and cuts corners and puts their health in jeopardy. […] We know that one of the biggest lies that the abortion movement tells us that we can only protect life in the womb at the expense of vulnerable women. The opposite is true. We cannot protect unborn children if we don’t prioritize the health and well being of their mothers. The Lousiana Unsafe Abortion Act … recognizes the fact that abortion providers routinely put the safety of women at risk.”

Scalise pointed out that abortion facilities to be held to the same basic health standards as any other outpatient surgical facility. “Shouldn’t there be some basic health standards? If abortion clinics are going to operate, shouldn’t they be concerned and make sure those doctors actually have hospital admitting privileges in case something goes wrong? We’ve seen women die on abortion tables because the doctors prepared and so why shouldn’t we have those standards? That should be something everybody should agree on. But today, the Court’s going to resolve that issue.”

Dr. Christina Francis, chair of the board at the American Association of Pro-Life OB/GYNs (AAPLOG) spoke about her responsibility to her patients to ensure they receive proper care. “I am here today representing thousands of women’s health care physicians. As an OB/GYN when I perform surgery on a woman, she is my responsibility and no one else’s. Abortion providers who abandon their patients after a botched procedure are negligent. Even physicians performing minor procedures at ambulatory surgery centers like circumcision, mole removal, a foot procedure are required to have admitting privileges. What’s happening to women in Louisiana is not acceptable behavior. When women are suffering complications like hemorrhage or infection, they’re either abandoned to the curb or left to the care of another physician who has no info about her. these abortionists are revealing their real priority profit over patient care. Women deserve better than this. […] Say no to deadbeat doctors.” 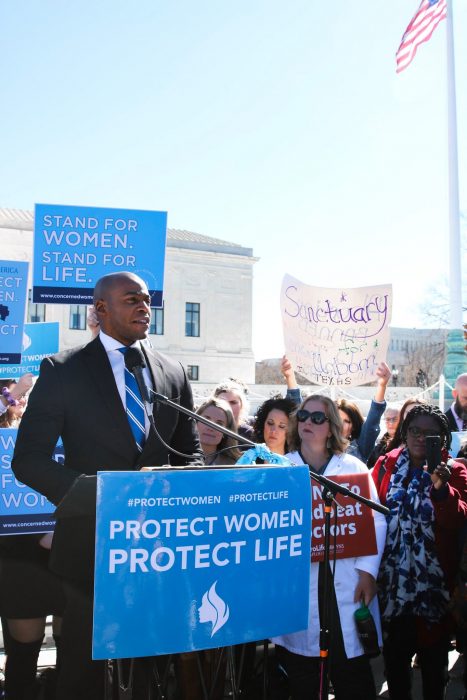 Jonathan Alexandre speaks at the rally.

Jonathan Alexandre is Senior Counsel for Governmental Affairs with Liberty Counsel Action. He told the crowd, “For decades, not only has the abortion industry treated babies as trash, but they’ve looked at the mother as just the trash can… so of course, they mistreat the mother…. after all every day is trash day at an abortion facility. But not anymore. The decades of discarding babies and the beautiful mothers carrying those babies are at an end.”

NFL star Benjamin Watson of the New England Patriots also took part in the rally. The father of seven has been vocal for years about his pro-life stance. “I believe that to be pro-life, it’s about having a whole life ethic,” he said. “It’s not simply about the children before they’re born. It’s about people that stand on the other side. It’s about people who don’t agree with us. It’s about people we may never meet. It’s about people at all stages of life. The most powerful thing that we call can do is to love others and respect others. And we do not engage in these sorts of things simply to win. We engage because we care about people’s hearts.” 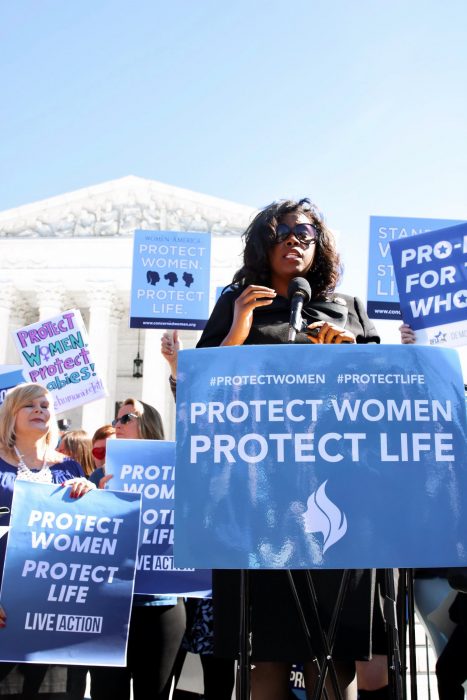 Louisiana Democrat Sen. Katrina Jackson, who authored the bill before the Court told the audience, “For so long this nation put the abortion industry before the health and safety of the women. […] We seek to hold others accountable. And especially when a billion-dollar industry makes money off of that woman’s decisions, they should be held accountable just as other doctors who treat us for other things. For far too long in this country, we’ve remained silent on that industry and we’ve been scared to put regulations on them, but not in Lousiana. Not in Louisiana. If you accept our money, of you accept that woman’s money, you should be qualified and you should do whatever it takes to ensure the best outcome for her. And that’s what this case is about.”

As previously reported by Live Action News, admitting privileges allow for consistency of care for women and enable the doctor who committed the abortion to alert emergency room staff of the patient’s condition and injuries before the patient arrives at the hospital. This is critical in ensuring that women receive timely and adequate care.

According to the rally website, every doctor at all outpatient surgical facilities in Louisiana is required to have hospital admitting privileges — except for doctors at abortion facilities. However, the Center for Reproductive Rights, the Hope Medical Group for Women, and two abortionists sued Louisiana over the law. This is the first abortion-related case to be heard by both Justices Neil Gorsuch and Brett Kavanaugh, who are considered to be conservative-leaning judges.