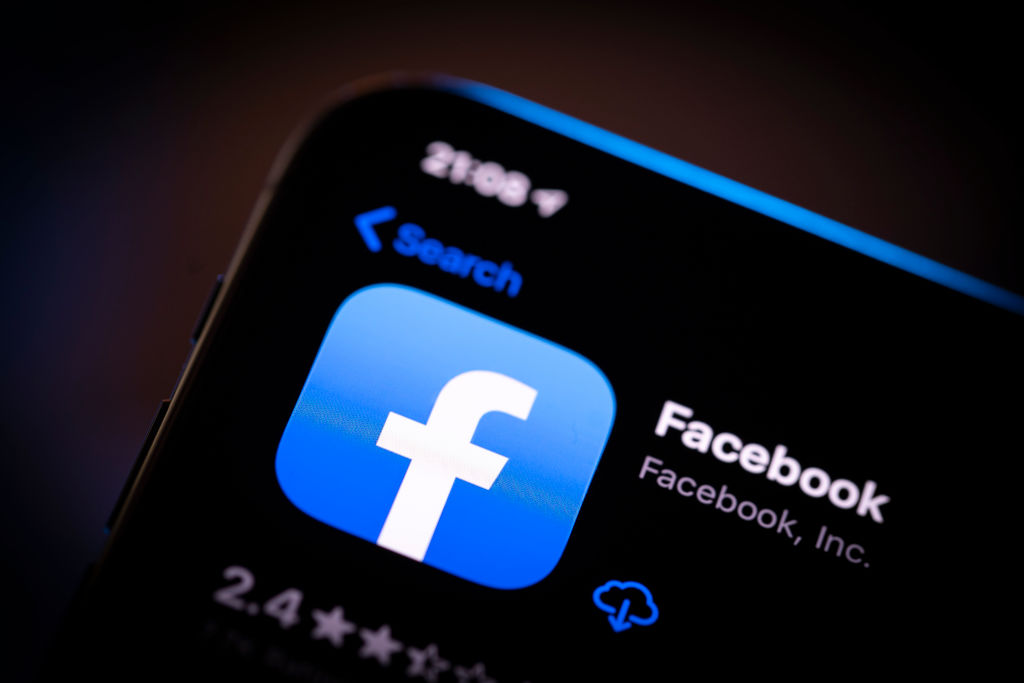 This week, social media giant Facebook blocked ads from the pro-life Susan B. Anthony List (SBA List) and a pro-life marketing agency after one of Facebook’s approved fact-checking news outlets published an inaccurate fact check of an ad placed by SBA List.

Facebook used an inaccurate fact check from The Dispatch as a reason to block two ads from the Susan B. Anthony List (SBA List). The Dispatch claimed a viral ad was “partly false,” and Facebook then blocked two of SBA List’s ads. The inaccurate fact check has since been rescinded. Facebook spokesman Devon Kearns told National Review that they were currently working to reinstate the ads. “The initial rejection was as a result of the fact check which… has now been repealed,” he said.

Watch the ad @Facebook just censored, falsely claiming that Biden-Harris *do not* support abortion up until the moment of birth: pic.twitter.com/0s95hI7zPE

In a statement emailed to Live Action News, Marcie Little, content marketing manager of Choose Life Marketing, explained that her organization provides marketing services to pregnancy centers across the country, helping them to reach and provide services, help, and care to women experiencing unplanned pregnancies . Yet abruptly and with evidently no warning, Little said Facebook suspended the organization’s ad campaign yesterday.

“On October 15th, we logged into our Facebook Business Manager account like any other day to check on the ads we run for these pregnancy centers. At the top of the screen was a notice that our account had been restricted because we apparently ‘violated Facebook’s advertising policies,'” Little said. “Immediately, we reviewed all of the policies and could find none that we had violated. Confused, we submitted a request to have our account reviewed. Shockingly, we received a notice that it could take weeks for us to receive an answer.”

She continued, “This means for weeks, we won’t be able to run Facebook or Instagram ads for the pregnancy centers we serve. As paying customers of Facebook, it is appalling our account was locked without reason and their only answer for us is it might take weeks to hear back from them.” 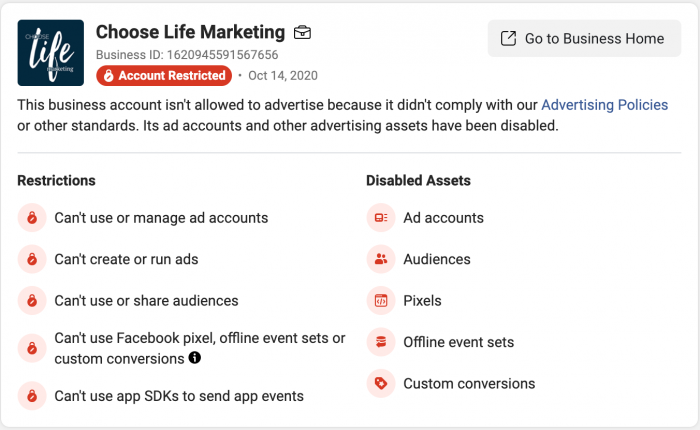 Facebook’s decision directly impacts not only the pregnancy centers, but the women in most need of their services.

“Our inability to run ads on two of the largest social media platforms these women use means they may not find out about the alternatives to abortion available to them. They won’t hear about the compassionate, caring pregnancy center staff who can listen to their fears and concerns about an unplanned pregnancy. They won’t learn about the free resources available to them if they choose life,” Little said. “The only option they’ll hear about is abortion, which has lasting negative impact on their lives — physically, mentally, emotionally, and spiritually. Facebook will be responsible for women missing out on the care they need and deserve in one of the darkest, scariest moments of their lives.”

The decision also deprives pregnancy centers of reaching donors who help to fund them, meaning it can impact their finances as well. “In 2020, like other organizations and businesses, pregnancy centers have felt the economic impact of the lockdowns for COVID-19 and need to raise money now more than ever,” Little said. “For many of our clients, Facebook has taken away part of their ability to do so.”

As a result of these actions, U.S. Senator Josh Hawley, chairman of the Senate Judiciary Committee Subcommittee on Crime and Terrorism, sent a letter to Facebook’s founder and CEO Mark Zuckerberg, calling for the obvious bias at the social media platform to be investigated. “All of this, no doubt, is part of an increasingly troubling pattern: it has become abundantly clear that Facebook is targeting voices that dissent from the national media’s progressive consensus. Suppressing distribution of the New York Post’s reporting on the Hunter Biden corruption allegations, it appears, was just the beginning,” Hawley wrote. “I look forward to learning more from you in the coming weeks, when you are under oath in a congressional hearing, about how these advertising takedown decisions were made.”

Social media platforms have long censored pro-life content, often preventing pro-life organizations, including Live Action, from advertising and reaching platform users. In a previous meeting with Senator Hawley, Zuckerberg admitted to having a bias in favor of the abortion industry last year. Clearly, despite the increasing calls for transparency and an end to the pro-abortion bias, nothing is changing at Big Tech.