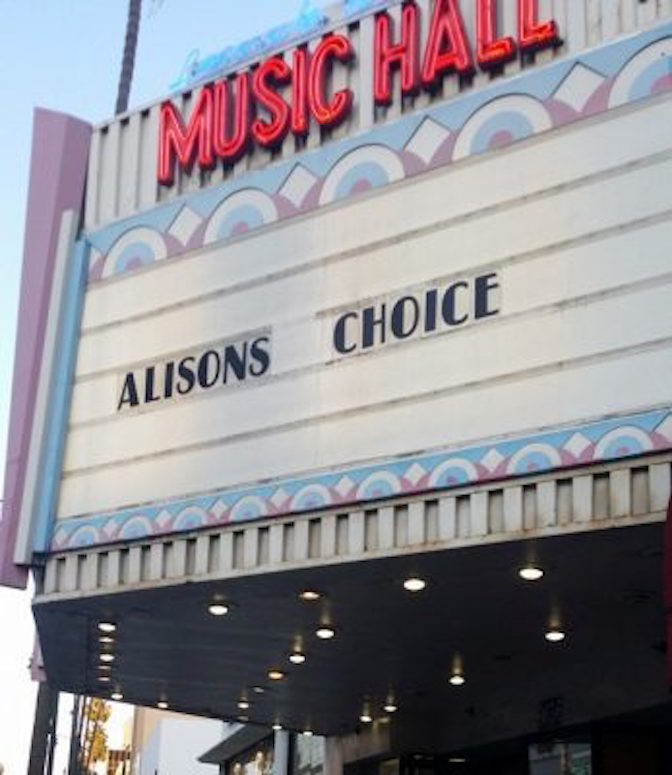 It’s the real time film that keeps you in a lifetime of suspense. Alison’s Choice has taken the nation by storm, albeit a small one since its been carried almost exclusively by a grassroots movement. This month, the film Alison’s Choice, is being screened all over the nation, even without a budget or billboard. This Saturday, June 11, an exclusive Florida screening has even pushed the boundaries of the initial screening expectations.

It’s no wonder the film is gaining traction even after it has been available for a short while. It is a masterful work that takes a divisive topic and unifies it under a bond of love.

As Live Action previously reported, the filmmaker, Bruce Marchiano, decided to forgo the traditional distribution process of the movie and do a direct-to-DVD release to get the film in the hands of pregnancy resource centers and others in the interest of saving lives now. In fact, they are seeing more bulk sales to pregnancy centers each day. Marchiano notes that they have launched a nationwide campaign to send a complimentary copy of the film to every pregnancy center in the nation.

But many are unsure a film about the topic of abortion would be engaging. The common reaction people have is that the film must be sad or depressing; after all, they say, it’s about abortion so it’s not a comedy. Except it is.

The film occurs in real-time as young Alison, beautifully played by Chanel Marriot, goes to an abortion center. Marriott’s portrayal of Alison is real-to-life, capturing the gamut of emotions that a girl in her circumstances would face. She has a deadbeat boyfriend, Rick (Julian Alexander), who tells her to “go take care of it; you’ve got to go someplace and take care of it,” noting, matter-of-factly, “a lot of girls do it.” So Alison decides to become one of those girls, and this decision becomes the basis of the hour-and-a-half film. The cast of Alison’s Choice at the recent Beverly Hills, CA screening.

It’s the dialogue and acting that carries this film so well. Without the benefit of action scenes and various settings, the film’s poignancy is housed in its raw humanity. Nurse Glo (Bunny Gibson) greets Alison at the front desk, and there begins a nail-biting wait. Glo asks Alison if she’s sure about her choice, and Alison admits she’s not. Glo quietly moves her appointment to later in the day.

But then abortion veteran, Lecretia (Alicia Monet Caldwell), steps in the scene and becomes the hinge on which all the humor of this film is housed. She tries to remind Glo that first-timers don’t have to pay. This subtle line carries a weight of the reality of the enticement of abortion, a vortex that sucks girls in and keeps them coming back. Caldwell’s character seems to know this and plays the role with precise comedic timing, managing to keep the audience laughing, while also conveying the harsh reality of repeat abortions.

Marchiano’s masterful creation cannot be emphasized enough; to have made, arguably, the most overtly pro-life feature film that has been created, and to have brought in humor without zero irreverence for the sanctity of life is a skill that most Hollywood filmmakers would pay big bucks to acquire.

It’s the humor that carries the audience to engagement where some might check out because of the heavy subject. But beyond the humor is the poignancy of the story. One of the characters that Alison meets at the abortion center is God incarnate. As Marchiano explains in the film preview, it’s a visual representation of the things happening in Alison’s mind, but for the audience to see this brings the intensity and reality of abortion to life.

Marchiano himself plays God, and does so in such a way that it’s hard to keep a dry eye while watching his performance. His tenderhearted, loving role is balanced not with judgment for a mom considering killing her baby, but a plea for this mom to not kill His baby. When He starts crying in one scene, He explains why: “They’re killing my babies.” Tears streaming down His face, only the most hardened person could not be touched by this moment.

The dialogue between Marchiano, portraying the Lord incarnate, and Marriott as Alison serves as the most powerful message in the film. It leads right up until the ending where viewers are left with appropriate dénouement, a satisfaction of a story well told.

Marchiano portrays a loving God who hates abortion – but not the people involved – which, likewise, becomes a powerful pro-life message in itself.  This has led to strong reactions in his email inbox as well. A few of his favorite comments:

Of course, not everyone loves the film, but sometimes that’s a compliment. Marchiano says:

We have a rep for international distribution. He took [Alison’s Choice] to the Cannes Film Festival, privately screening it to potential distributors. He said he’s never [represented] a movie where people had such strong reactions on both sides of the fence. He told me professionalism went out the door as people were so moved in their hearts. And anger toward the movie also! He said some were so offended by it (and that just tells me we did something right!).

Audiences in the Tampa, Florida, area will be able to discover this firsthand on Saturday night, June 11, (more details here).

Marchiano comments on the “miracle” of this screening:

This is actually quite a miracle. What happened is the organizer scheduled a Tugg event but wanted to do a Saturday night instead (which Tugg doesn’t offer). So he contacted the theater directly, spoke to corporate – and the result is a direct theatrical release. My prayer is for great success with this event because that will open the door to Carmike releasing [Alison’s Choice] in more of its theaters.  In fact, if theater chains see demand, then the movie takes on a life of its own and will spread through theaters across the country. Just imagine, an unashamedly pro-life movie packing out American theaters. This is easily possible if people rise to action.

Several other screenings are upcoming. They may be viewed here, and this list is updated regularly. It includes a link for audiences to bring a screening to their city, with no cost or risk to them. These screenings also serve as fundraisers, generally for pro-life pregnancy centers. Marchiano hopes that others will sign up to host screenings.