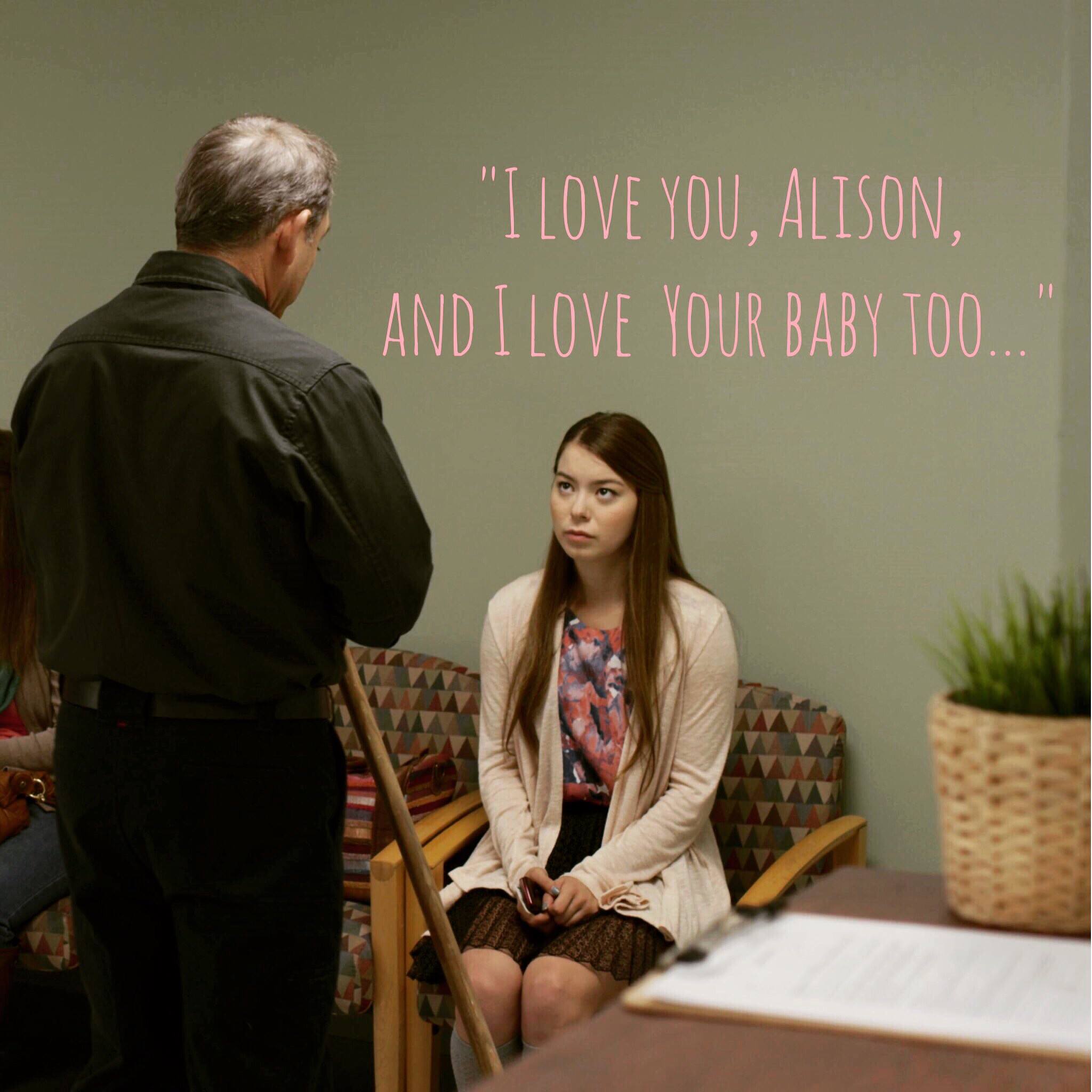 Bruce Marchiano is reprising his role as Jesus. Yet again. The actor, producer and screenwriter is best known for his first appearance of Jesus in The Gospel of Matthew. Now, he’s about to be the face of Jesus to the pro-life community—and hopefully many pro-life converts, as his new film, Alison’s Choice was released last week.

Alison’s Choice is a full-length feature film about a girl named Alison who finds herself pregnant and makes an appointment at an abortion facility. There, her conflict as she waits to be called for her abortion becomes the powerful story, behind the unique  pro-life film. Marchiano plays the role of Jesus, in the form of a janitor at the abortion clinic. Throughout the course of the film, his personification of God is forefront in Alison’s decision.

“I love you, Alison, and I love your baby too…” When young Alison finds herself pregnant by a dead-beat boyfriend, she turns to abortion. There in the clinic, as she waits for her name to be called, she encounters a cast of comical and quirky characters; a flamboyant counselor, a suburban mom, a heart-weary receptionist, an inner city counterpart… And more than anyone else, a gentle-faced janitor with mop “eternally” in hand. The two begin to talk and it quickly becomes clear he is no mere janitor, but the living God manifest–and He’s come to plead for the life of her baby. With the clock ticking precious minutes away, it is a fight for life or death. Suddenly a nurse appears, “Alison, we’re ready for you..”

It was so important to Marchiano to get this film in the hands of people across the nation, that he decided to release it immediately, rather than waiting for the languishing timetables of distributors. The quest to find one had drawn out the process long enough.

Marchiano has learned several lessons from trying to secure a distributor for this project, including a stinging one—that Christian filmmakers don’t necessarily want an overtly Christian film. He says:

Probably the biggest wake-up call in the hunt for distribution was an email I received from an acclaimed distributor of Christian movies. Keep in mind I just assumed they would be the type of distributors interested in Alison’s Choice because of the strong pro-life message. After screening the film, he emailed me: “Very powerful film that is sure to touch many lives, but it’s not a good fit for us.”

As you can guess I was pretty taken aback. I mean, “powerful” and “many lives” is what it’s all about, isn’t it? Little did I realize that this would become a pretty typical response. I had several meetings where decision-makers expressed how moved they were by the film; even that they thought it was an important film – but passed on it. The problem, apparently, is that they didn’t think they could make money with it. Of course they’re talking to a guy who’s been working on it for three years without salary.

Money was never Marchiano’s goal in this film. He boils it down to a simple statement in response to these distributors:

You go ahead and put a price on a baby’s life but I’m certainly not going to. Bruce Marchiano as the janitor (God) trying to convince Alison not to kill her baby.

Ironically, however, it was the secular distributors who appreciated the film and took interest in bringing  it to the big screen. He says:

[T]wo of the three most promising were secular distributors who simply loved the movie. It was actually very funny because in those meetings they said nothing about the message, they just were captivated by the movie. They thought the story and cast were top-notch – which they are. In fact our lead, Alison, has been nominated for two very prestigious awards for her work in Alison’s Choice.

In fact, he says, even the least likely person one would expect to show interest in a film of this nature was one of the most interested–a maker of horror films. Marchiano says, “One of those distributors is a legend in the horror film world of all things! Just imagine, a pro-life film championed by a guy who sells horror movies. It’s hilarious!”

But ultimately, even with a distributor finally ready to put the money behind it, the reality that the film would be held another year or two in the distribution process was the tipping point. It was Marchiano’s wife, Maria, who clinched the deal. He says:

[A distributor] came forward who was on fire to raise a couple million in marketing funds and take Alison’s Choice to theaters. It was very exciting. But there was one catch – the movie wouldn’t be released for at least another year, probably two. One morning over coffee my wife and I were discussing it. She has a way of speaking the bottom line into situations, and she said to me, “Every day that we wait means more babies dying that could be rescued.” She had tears in her eyes. It’s amazing how simple everything becomes in a moment like that. So from then on our mandate became extremely singular and crystal clear–get the movie into people’s hands as quickly as possible so it can begin the work the Lord birthed it for.

And with that Alison’s Choice headed from the shadows into the light. Last week, the film was released direct-to-DVD, so people can order from the website. But Marchiano also wants pro-lifers to bring it to theaters through tugg.com. By using this method to bring a film to a community, Marchiano also hopes that pro-life groups, pregnancy centers, churches, anyone who wants to support it, will use this method not only to get the film to more people but to raise funds for their own pro-life causes. Tugg.com is a web platform where a grassroots effort such as screening Alison’s Choice comes to life. A pro-life pregnancy center might decide to bring the film to its city. It would sign up on Tugg.com, then choose a date and time for the screening. If enough tickets are sold, then the film will be screened in a local theater (and if enough are not sold, no one gets charged). This “theater-on-demand” method of bringing films to various cities is an easy way to get an important film before people.

While the film was not easy to produce, one thing Marchiano refused to do was compromise the quality of the film. Bruce Marchiano on the set during filming of Alison’s Choice

As a Hollywood veteran, he says:

So often a “message film” falls short in aspects of story, talent, cinematography, etc. It was important to me to make a film that people would say is a good film, even if they didn’t agree with the message.  Based on the reaction of many who have no “message reason” to like Alison’s Choice, I’m very confident we achieved that.

Not only did secular distributors comment on the film’s artistic qualities, but “Alison” herself, Chanel Marriot, earned a nomination from the Young Artist Awards for Leading Young Actress.

Just as artistry was not compromised, neither was the message. Marchiano notes the many testimonies of life he encountered even before the release. He shares:

One of the crew came to me and said he was always pro-abortion, but after seeing some of the scenes being filmed he realized he was wrong.

One of our donors was telling his teen brother about the movie. He had no idea the brother’s girlfriend was pregnant and planning abortion. That discussion saved that baby’s life.

Our Academy Award winning editor, Scott Conrad (of ‘Rocky’ fame), did the movie for a fraction of his fee because “it’s my chance to save a baby’s life.”

In the few screenings we’ve had – several women have come and told me their “stories” and how the movie impacted them. I remember in one screening, a woman wept aloud for the longest time.  Lord only knows what was going on in her heart. So we haven’t even begun yet, and by the Lord’s hand, the work has already begun. I can’t tell you what that means to me.

“So you see,” Marchiano said recently, “Alison’s Choice is actually a ‘true’ story.”

Marchiano, IMBD reports, has the distinction of portraying Jesus “in more films than any actor in history.” With Alison’s Choice, he is able to see God’s hand extended to literally save lives of babies. And that makes the struggles to get the film into the public’s hands worth every bit of work. Bruce Marchiano and his wife, Maria. He credits Maria with the wisdom to release the movie without further delay.

It all comes down to those words my wife spoke and the tears in her eyes when she spoke them. As a producer/director there is nothing more “feather in the cap” than to have a distributor take your movie to the local Cineplex. But again, what price can you possibly put on a precious life? Wow, I sure wouldn’t want to stand before God having prioritized my career–over even one precious baby.

Alison’s Choice is available on the website. More information on the film can also be found on its Facebook page.  Information on hosting a screening, whether through tugg.com (available soon) or private church screening licenses, may be found here. Marchiano hopes a grassroots effort of pro-lifers to get the film out will save more babies’ lives.