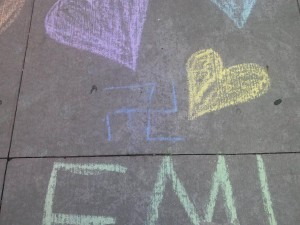 The “tolerant” crowd strikes again! In honor of “Pro-life Chalk Day,” Students for Life at Eastern Michigan University covered the campus with positive, compassionate chalk messages like “Life is precious, let’s protect it,” and “love them both.” By the next day, campus pro-aborts had washed away many of the chalk messages and defaced others with swastikas.

Yes, swastikas. Because who doesn’t read the message “Life is precious” and immediately think of Hitler? “Love them both” was totally the theme of “Mein Kampf.” Right? 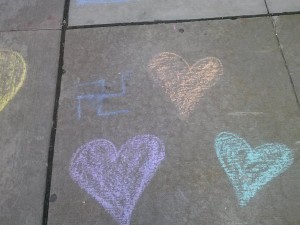 If you’re scratching your head right now, you’re clearly not a brainwashed college pro-abort whose idea of “tolerance” is destroying opposing viewpoints and intimidating people into silence.

“Eastern Michigan Students for life has two main goals on campus: inform the student body about abortion and help women in crisis pregnancies,” explained Rueben Ainley, vice president of Eastern Michigan University Students for Life. Ainley said that their group tries to have conversations with their peers on campus to achieve both of those goals.

“We also have many events planned throughout the year to educate the student body about abortion,” Ainley continued. “The vandalism that took place on our sidewalk chalking display shows that some people who disagree with us do not want to have dialogue about abortion but instead show their point of view through vandalism and hatred.”

“Pro-life students have every right to have their voice heard as anyone on any college campus,” said Students for Life president Kristan Hawkins. “Drawing swastikas next to positive messages of love and hope are unconscionable. Our pro-life movement serves to help and support those who are marginalized by society.”

Unfortunately, this type of behavior is the norm on college campuses. Administrators constantly come up with creative new ways to squash provocative views on campus, such as by confining pro-life groups to “free speech zones” and forcing them to display warning labels for “inappropriate content.” (Of course, controversial LGBT groups and sex-themed student organizations tend to get a pass.) These stories are so common they can become tedious after a while: another day, another pro-life group censored.

But we can’t ignore these cases. Young, college-age women are the most likely to have abortions, and therefore messages like “love them both” are desperately needed on all campuses. Pro-life activists everywhere should demand an end to the intolerant censorship.