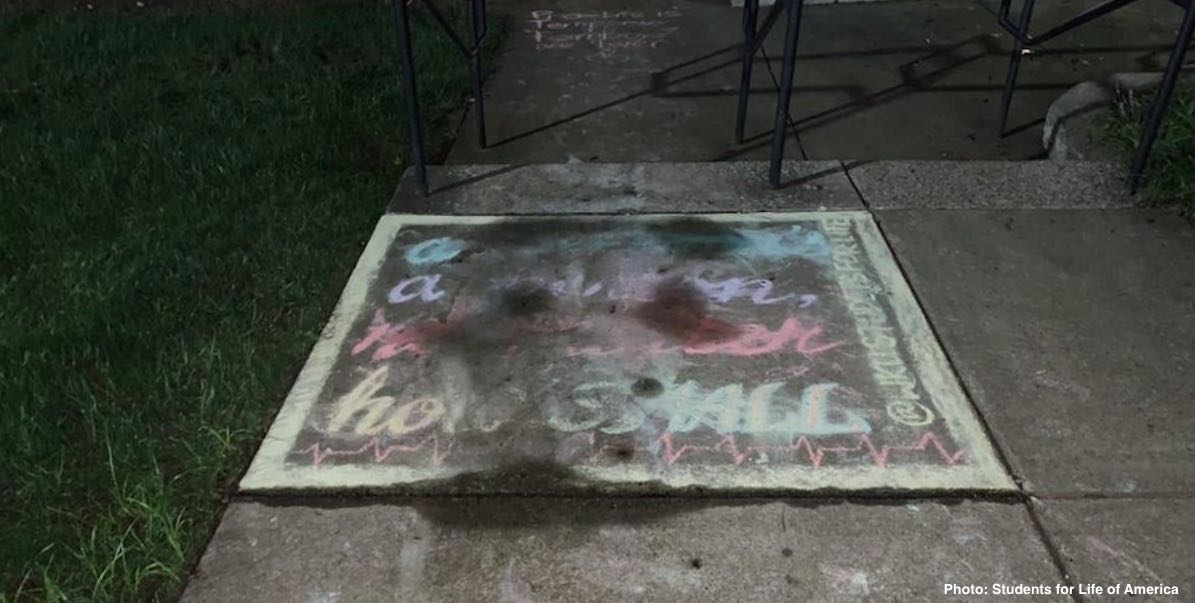 Pro-life students at Western Kentucky University (WKU) and Worcester Polytechnic Institute (WPI) drew the ire of their pro-abortion peers last week by chalking positive, life-affirming messages on their respective campuses. Chalk drawings are a simple and effective way to advocate for preborn lives, but unfortunately, chalk art is also easy to vandalize. Pro-abortion students looking to remove pro-life content from their campus have often scrawled vulgar slogans or crude images like swastikas on top of compassionate pro-life chalk messages. Sadly, the pro-abortion students at WKU and WPI were no exception.

Students for Life of America (SFLA) reported that the Hilltoppers for Life at WKU devoted time to creating chalk art that gave information about fetal development, and some of the colorful sidewalk squares featured famous quotes from Dr. Seuss, such as “A person’s a person, no matter how small.” The artwork also included positive adages like “You are loved.”

Students responsible for vandalizing the chalk messages made a few modifications to the art, writing things like “Human life is a mistake. You are not loved.” To make it clear that the weather was not behind the alterations, the vandals left a calling card, writing, “Why spread hate when you can shut the f*ck up.” However, nothing that the pro-life WKU students wrote conveyed any hateful or violent words at all.

Att WPI, the pro-abortion activists not only vandalized the pro-life chalk drawings, but also subjected the pro-life students to public backlash on social media for their pro-life artwork. Helena, the leader of the student group responsible for the drawings, said in a statement that was shared by SFLA:

We organized a chalking event on Tuesday evening for the club to participate in to write messages that promote life. The next morning, we saw that several of the messages were partially erased, namely “Pro-life” in “We are the pro-life generation” and “not” in “You are not a clump of cells.”

The chalking resulted in quite a bit of harassment on our club’s Instagram. Additionally, someone took a picture of the “You are not a clump of cells” chalking message and posted it on the WPI Reddit with the title, “As someone doing a minor in bio, we are all just a clump of cells.” This resulted in lots of crude, negative comments.

The WPI police were able to identify three students who had been seen washing away the pro-life messages. After the Dean of Students was notified, he expressed surprise that the pro-life drawings had created such a controversy. Thankfully, the dean affirmed the free speech rights of the pro-life students, assuring them that steps will be taken to prevent vandals from interfering with their future pro-life campus outreach efforts.