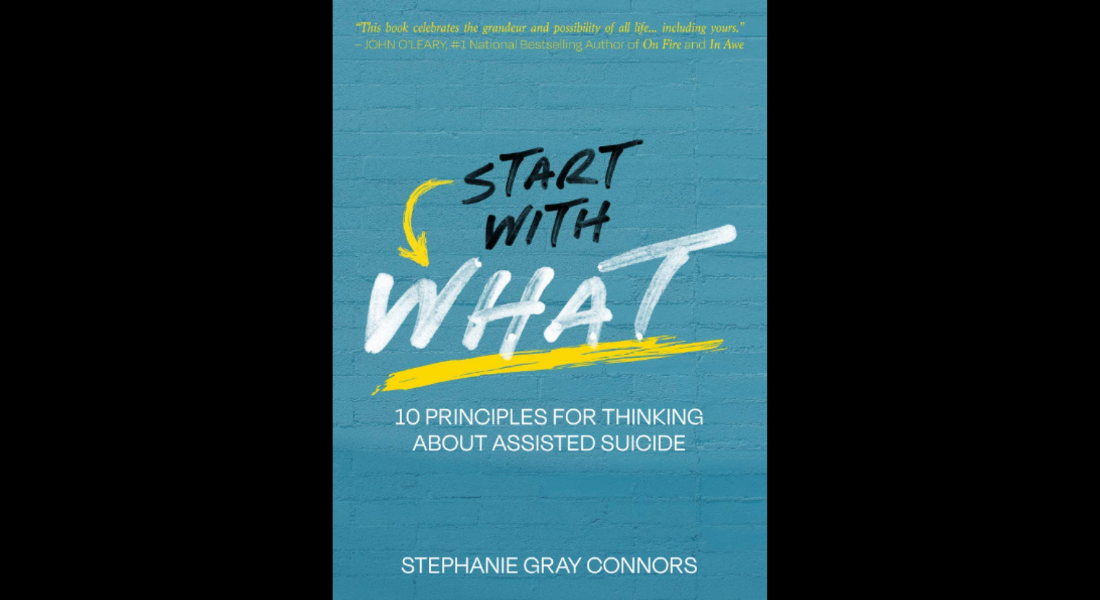 Pro-life activist Stephanie Gray Connors has been advocating for life since she was a child. Originally from Canada, she began giving pro-life presentations at the age of 18, and her apologetics career has flourished since then. She has given over 1,000 presentations around the world, including at companies like Google and at prestigious universities. She has publicly debated abortionists and pro-abortion advocates, including Princeton’s Peter Singer. She is also an author, and her newest book tackles a growing problem around the world: the legalization of assisted suicide.

Gray Connors’ first book, Love Unleashes Life: Abortion and the Art of Communicating Truth, offered readers a fresh take on pro-life apologetics. Her newest book, Start with What: 10 Principles for Thinking about Assisted Suicide, was published earlier in 2021, and shares touching stories of people who have experienced suffering, and how assisted suicide was not the answer for them. It gives pro-lifers the tools to fight back against the spread of assisted suicide using compassion and grace.

In an interview with Live Action News, Gray Connors said she began speaking about assisted suicide after it was made legal in Canada in 2016.

“I saw a need to equip people to be able to communicate winsomely and persuasively and as audience feedback was very positive, I thought there was a need to put it all in writing — hence the book,” she said. “Now, with efforts in various US states to legalize assisted suicide, along with countries around the world, the need is great to help people understand the dignity of all human persons, especially those who are vulnerable and suffering. I use my trademark style of storytelling and question-asking to make the pro-life points clear and inspiring.”

For the pro-life movement, Gray Connors said the issue of bodily autonomy is the biggest one to overcome.

“People will argue, ‘It’s my life, so if I end it with assisted suicide that doesn’t impact you,'” she said. “That sentiment actually isn’t true; as poet John Donne once said, ‘No man is an island.’ I share a story in my book about a Columbian woman named Zuly who was tempted to kill herself but didn’t follow through.”

That woman, Zuly, is now am artist and motivational speaker, and Gray Connors said her decision to choose life has helped others. “A young man who was going to kill himself decided not to when he watched an interview of Zuly on TV,” she explained. “Just as her presence positively impacted him, her absence — had she committed suicide or assisted suicide — would have negatively impacted him.”

Another aspect of assisted suicide is control, but Gray Connors argued that amazing things can happen when people are willing to let go instead. “I tell the story of Mattie Stepanek, an inspiring little boy whose spirit of surrender is proof of that,” she said. “When he was suffering and near death, he prayed for a miracle and lived for almost three more years. In that time, his poetry became New York Times bestsellers and he was on Oprah and Larry King Live; he also befriended former US President Jimmy Carter.”

While assisted suicide is seen as an easier, less painful way out of death from a painful disease, Gray Connors says Mattie’s story should give them hope. “We can’t be guaranteed to know what’s next,” she said. “Mattie is proof of that because death wasn’t immediately next for him after all. Instead, by living life fully until he died naturally, he had a massive, positive impact on the world for several more years.”

The pro-life movement has been understandably focused on abortion, but as assisted suicide grows around the world, Gray Connors urged pro-life activists not to ignore the threat as it spreads. And more and more pro-life organizations have been stepping up to fight back. “With governments and public opinion increasingly supporting assisted suicide, I am noticing pro-life people and organizations developing a response,” she said. “My friends over at the Euthanasia Prevention Coalition have been addressing this issue for two decades and I’m noticing more medical organizations rising up and speaking out for vulnerable patients and populations, too.”

For pro-lifers who wonder what they can do, Gray Connors offers some options in her book, and gave a few tips in her interview with Live Action News. “I think, besides working politically to resist bad law and implement life-affirming laws, besides journeying alongside those who are suffering, we need to really impart an apologetic for the pro-life perspective so people can understand and articulate why assisted suicide should be rejected.”