In the state of Utah, lawmakers are attempting to pass a measure that would require that abortion doctors to tell women that they may be able to reverse the abortion pill regimen (RU-486).

But has this success rate stopped abortionists and Planned Parenthood from opposing it? Nope.

Abortionist Leah Torres claims she is concerned about the “risk” abortion pill reversal might have… on the baby who survives. Yes, you read that correctly.

Also in opposition to the Utah proposal, which has not yet been fully drafted, is Karrie Galloway, CEO of Planned Parenthood of Utah. She told Deseret News that the legislators were playing doctor. “We need a vigorous discussion with people who have the appropriate letters after their name — who have done rigorous study to earn those letters after their name — as our trusted health care providers,” she said.

But Galloway and Torres, who both profit from abortion, appear to be ignoring already published studies on continued pregnancy results for patients who discontinue use of the abortion pill regimen, Mifeprex (mifepristone) and Misoprostol.

The FDA states in their most recent Mifeprex label, “The risk of adverse developmental outcomes with a continued pregnancy after a failed pregnancy termination with MIFEPREX in a regimen with misoprostol is unknown.” Keep in mind that if she doesn’t attempt an abortion reversal, the preborn child will likely die.

The reason the FDA may be stating that the risk is “unknown” may have more to do with the drug’s manufacturer, Danco, than with actual hard evidence. In 2006, Janet Woodcock, who was Director of FDA’s Center for Drug Evaluation and Research (CDER), when the Agency approved the abortion pill, and later became the FDA’s M.D.Deputy Commissioner for Operations, told a subcommittee:

Danco Laboratories, the sponsor of the Mifeprex NDA, is currently conducting the pregnancy follow-up study; it has designed and implemented a protocol, but it has determined that as of this time very few pregnancies (less than 20) were continued. For the number that were continued, Danco informs the Agency it has been unable to collect outcome data on any of them because of difficulties enrolling patients.

The fact is, there is research that indicates that the baby may not be as negatively affected as Planned Parenthood and Torres suggest, should a woman choose to continue her pregnancy after taking the first of the two abortion medications in the regimen.

An article on the abortion drug published by the Pittsburgh Post-Gazette on January 16, 1995 (snippet pictured right), quotes Guttmacher’s deputy director of research Stanley Henshaw, who said that there had not been any cases of birth defects in the children of women who changed their minds after taking RU-486. 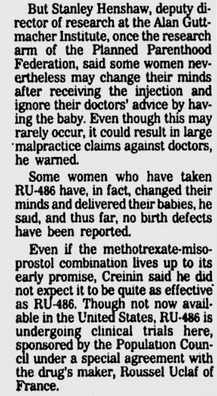 In July of 1996, during a FDA Advisory Committee, Population Council Vice President Dr. C. Wayne Bardin, who had responsibility for the oversight of the new drug application to the FDA for RU-486, explained to the committee why they told women in clinical trials that if they continued their pregnancies after taking the abortion drug, their babies would suffer from abnormalities:

There have been 21 children born to women who changed their mind and there have been three congenital anomalies. Now, statistically, that is not enough to determine what the effect is in humans. So, not knowing the effect in humans, we advised women about what the animal data showed and said that there was a considerable risk to them if they changed their mind because usually teratologic effects in animals will translate or have a high possibility of translating to teratologic effects in humans. so, these were the data that were presented to the women.

Among the so-called abnormalities the Council observed, Bardin explained, were “a club foot, some abnormal fingernails, and an immune disease which led to death.”

“The others are normal,” he added.

A study published in the January 2013 Journal BLOJ, on behalf of the Royal College of Obstetricians and Gynaecologists, concluded that “the rate of major malformations after first-trimester exposure to mifepristone is only slightly higher than the expected 2–3% rate in the general population.”

The study looked at 105 pregnancies with 46 exposed to mifepristone alone, and 59 exposed to both mifepristone and misoprostol, the two drugs used in the abortion pill regimen. According to the authors, there were…

… 94 live births (90.4%) and 10 (9.6%) miscarriages (including one with major malformation). Elective termination of pregnancy was performed after the subsequent diagnosis of trisomy 21 in one case. The overall rate of major congenital malformations was 4.2% (95% CI 1.2–10.4%), with two cases among 38 patients exposed to mifepristone alone, and two cases among 57 patients exposed to both mifepristone and misoprostol.”

The authors investigated the malformations more thoroughly and seem to indicate that there were potentially other reasons for the various defects they observed outside the abortion drug regimen, writing, “Taken together, the six cases of major or minor malformations occurring in patients exposed to mifepristone do not suggest a particular pattern of malformations that may be related to this drug.”

This first prospective study found that the rate of major malformations after first-trimester exposure to mifepristone is only slightly higher than the expected 2–3% rate in the general population. Such findings provide reassuring data for risk evaluation for continuation of pregnancy after mifepristone exposure.

Women who regret their abortions often speak about being pressured or about making the decision quickly out of fear. In some cases, women are forced into having an abortion by a spouse or relative, or, as Live Action News has already documented, children are taken for abortions to cover child rape.

Despite all their talk of being pro-choice on abortion, the abortion lobby’s consistent opposition to offering women the choice to reverse an abortion decision is obvious. Abortion is an industry and as such, abortion clinics and Planned Parenthood centers profit only when women choose to purchase those services. If women discover that they can reverse the abortions they were “sold,” they might also discover that they were lied to about the humanity of their babies. And that is bad for business.