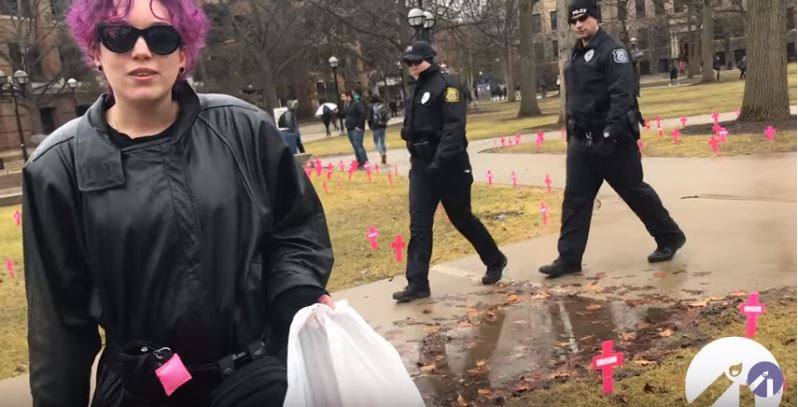 The Students for Life chapter at the University of Michigan, Ann Arbor set up a pro-life display in remembrance of lives lost to abortion. Called the Cemetery of the Innocents, the group placed pink crosses as part of the Students for Life of America #PlannedParenthoodTruth Tour, aimed at exposing the truth of how Planned Parenthood treats women. But a group of pro-abortion students interfered, vandalizing the display in an attempt to prevent the message from reaching students.

The display was set up around nine o’clock in the morning, with permission from the university. But throughout the day, pro-abortion students kept approaching to vandalize it by removing crosses, throwing them away, and putting them on top of trash cans.

A video caught an exchange between Kaylena Wiederhold, Students for Life’s Michigan Regional Coordinator, and one of the pro-abortion protesters.

“Is there a reason why you’re doing this?” Wiederhold asked. Yet despite Wiederhold’s calm tone, the activist refused to engage with her, repeatedly insisting that the conversation was “not going to work,” and refusing to give the pro-life group the crosses back. It wasn’t until police officers approached that she caved, although she tried to play innocent.

“We were just picking up this garbage on the school campus,” she began. “But we’ve realized that apparently, this is someone’s property. And you’re telling us to leave it, I’m assuming, correct?” The officers reaffirmed that the pro-life group had a permit, and the crosses would be returned. Wiederhold asked the activist to return them how she found them, but instead, she dumped them out of a trash bag onto the ground and left.

READ: 5 pro-life ways to fight abortion in 5 minutes or less

“Free-speech on college campuses continues to be an issue,” Wiederhold said in a blog post on the Students for Life of America website. “The abortion activists on campus should be ashamed of themselves for trying to disrupt a peaceful memorial to not only babies harmed by abortion, but also women, men, and families harmed by abortion. We hope the University of Michigan will come out strongly in defense of free-speech on campus.”

This kind of vandalism is not unheard of by any means; signs promoting pro-life talks have been stolen, and other on-campus displays are frequent targets for vandalism, sometimes even accompanied by violence. And it’s not only an assault on pro-lifers but an attack on free speech as well.