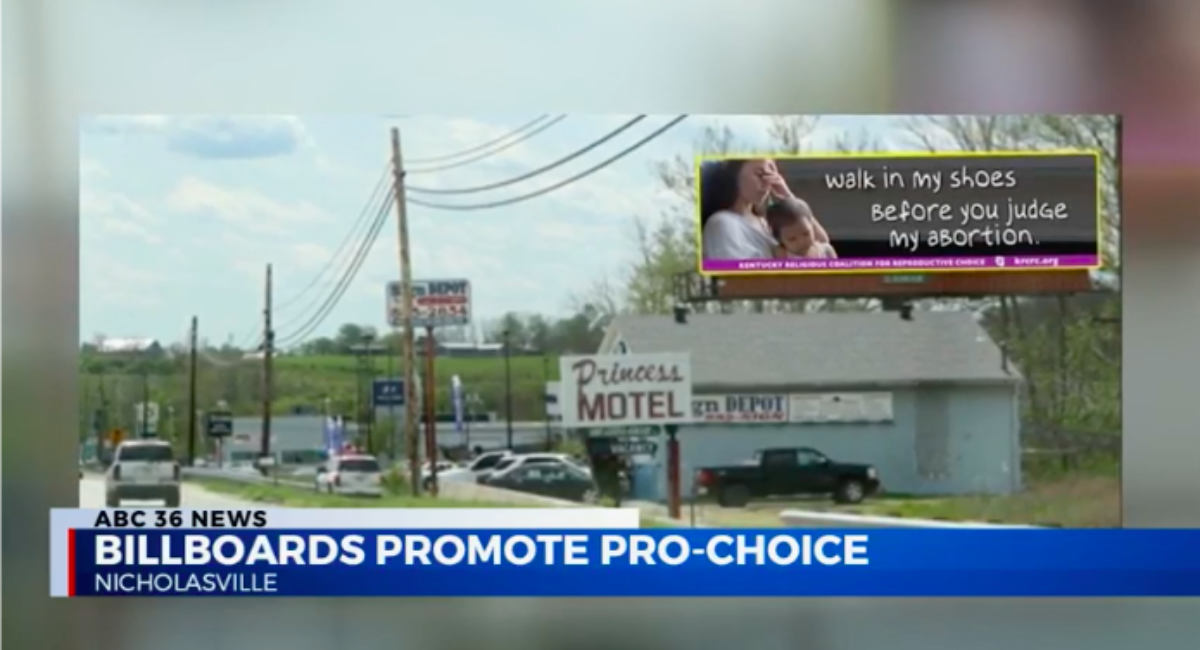 The pro-abortion Kentucky Religious Coalition for Reproductive Choice (KRCRC) is launching a billboard campaign around the state for the next two months, claiming that support for abortion and religious faith — particularly Christianity — are compatible. Each billboard communicates one of three messages: 1) “Good people have abortions. God knows and loves you,” 2) “Walk in my shoes before you judge my abortion,” and 3) “Abortion: a personal decision between you and God.” Some versions of the third message depict a Caucasian woman praying, while others show an African-American woman.

Rev. Diane Snowa, a KRCRC board member, told a local news station, “For too long, America’s religious right has dominated the discussion about abortion, shaming women and telling them that abortion is a sin. The Kentucky Religious Coalition for Reproductive Choice wants Kentuckians to hear a different truth: Abortion is a very personal decision, between you and God. Good people have abortions; God knows and loves them.”

She continued, “For many Kentuckians who have had an abortion – a medical procedure one in four American women will have had by age 45 – this may be the first time they’ve ever heard anything other than that God would disapprove. Our message is of a loving God who understands, and who offers free will. Those choosing abortion deserve compassion and love, not shame and harassment.”

Interestingly, the KRCRC does not provide a single Biblical citation in support of abortion on its website. Also of interest is the fact that the Satanic Temple has met with partial success in attempting to run billboards with similar positive messaging about abortion such as the idea that abortion is a lifesaving procedure, as well as claims that it is a “religious ritual” held in high regard by Satanists.

He continued, “Promoting elective abortion is the antithesis of human flourishing. Abortion minimizes the value of human life and leaves heartbreak, guilt, and sorrow in its wake.”

Kentucky Right to Life Executive Director Addia Wuchner told the Winchester Sun, “Kentucky Right To Life has always been and will always be unwavering in our support and love for mother and her child. We believe one cannot love the woman without loving the child. God is the author of life and our mission and pro-life work reflect God’s love. We bear witness to God’s love, recognizing the dignity and the intrinsic value of every life from conception to natural death.”

In November of 2022, Kentucky voters will consider an amendment to the state constitution that would read: “To protect human life, nothing in this Constitution shall be construed to secure or protect a right to abortion or require the funding of abortion.”