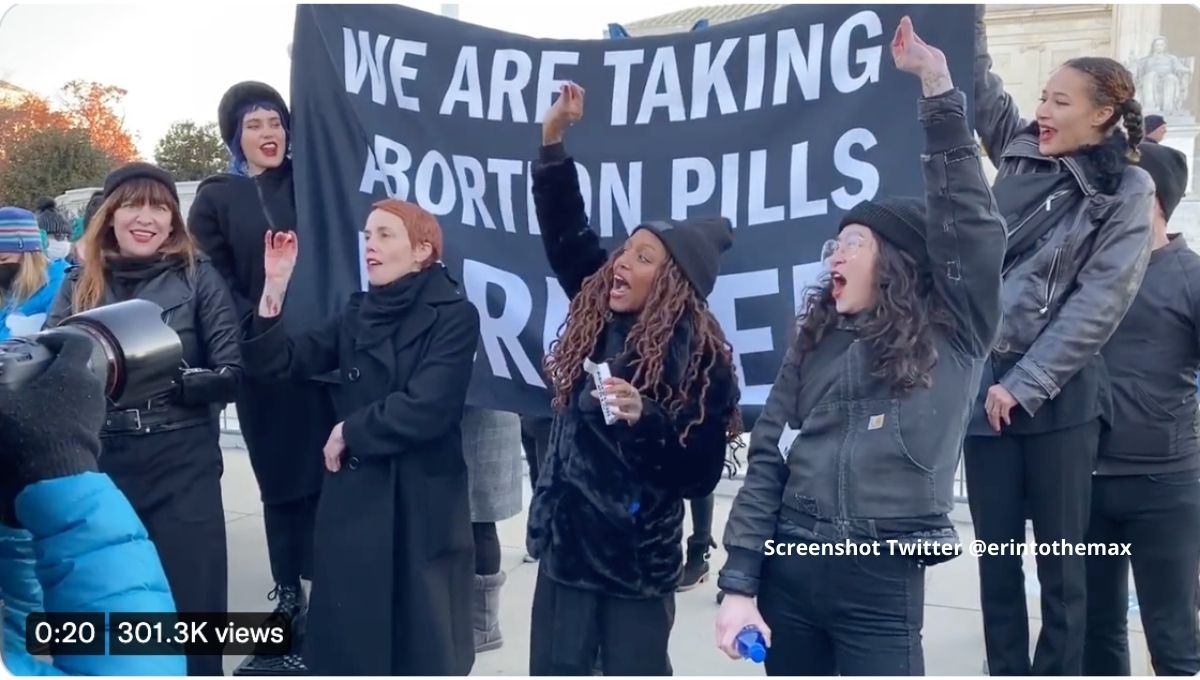 Following chants of “Abortion pills forever,” four pro-abortion women appeared to swallow pills they claimed were the abortion pill regimen — which actually includes a second drug taken up to 48 hours later — while outside the Supreme Court ahead of oral arguments in the court’s first big abortion case in years. Dobbs v. Jackson Women’s Health Organization centers on the Gestational Age Act of Mississippi, which restricted abortion to the first 15 weeks of pregnancy.

The women smiled as they swallowed the pills, which cannot be verified to be the actual drug mifepristone. Behind them, two other women held a banner reading, “We are taking abortion pills forever.” All six women were dressed in black and those who took the pills removed them from boxes with bold type reading “Abortion pills.” This, of course, was not legitimate abortion pill packaging and simply added to the theater of the moment.

READ: Legal experts say viability rule in abortion law was a political decision, not a science-based one

Video of the demonstration was posted to Twitter by Erin Matson of the pro-abortion group ReproAction, who wrote, “Epic action from @ShoutYrAbortion — people took abortion pills outside the Supreme Court!” Shout Your Abortion encourages women on its website to order abortion pills ahead of time in case they become pregnant, along with the disclaimer that doing so “may carry legal risk.”

The abortion pill carries serious potential risks, including hemorrhaging, incomplete abortion, infection, and death. While the abortion industry promotes the abortion pill as safe and as simple as taking Tylenol, it has actually been found to be four times more dangerous for women than first-trimester surgical abortion.

If the Supreme Court rules that the Mississippi law can stand, it will open the door for other states to restrict abortion to before the arbitrary age of “viability.” The 1973 Supreme Court ruling Roe v. Wade and the 1992 Supreme Court ruling of Planned Parenthood v. Casey determined and reaffirmed that states had a “compelling interest” in protecting human life only after about 24 weeks of pregnancy. However, viability is a subjective term.

Every human being is viable in their natural environment, because they are in the process of living. Forcing death upon a preborn child through abortion is the direct cause of making that child non-viable. States have an interest in protecting human life at all stages of development.

Editor’s Note: This article has been modified since original publication.