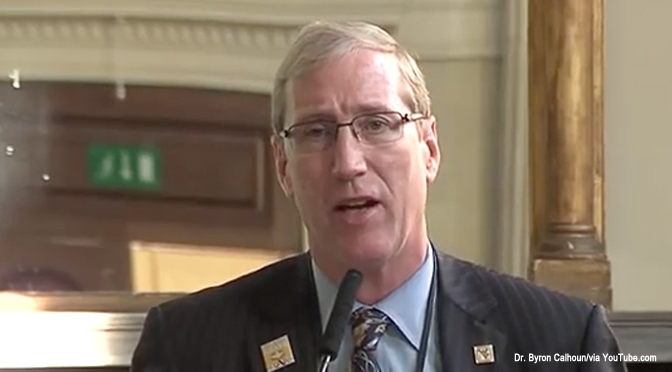 To the abortion lobby, there is no bigger sin a doctor can commit than having the audacity to be pro-life. Never mind that the science backs up the pro-life position that each preborn child is a human life; never mind that they claim to be “pro-choice”. The abortion lobby does not care about the science – they’ll lie about it whenever possible – and they do not care about people actually exercising any modicum of choice. The only acceptable choice is abortion, so it’s not surprising that a group of pro-abortion extremists have decided to launch a witch hunt against a West Virginia OB/GYN because he committed the crime of being openly pro-life.

Dr. Byron Calhoun is the unfortunate target of their wild accusations, with abortion fanatics seemingly trying to get him fired. From RH Reality Check…

Women in West Virginia are speaking up against Dr. Byron C. Calhoun, the prominent anti-choice OB-GYN who has been caught out lying about the risks of abortion on more than one occasion.

He is vice chair of the department of obstetrics and gynecology at West Virginia University, and serves as the only maternal-fetal medicine specialist at the Charleston Area Medical Center (CAMC)—where many West Virginia women go for prenatal and birthing care.

That means Calhoun is the only expert available at the state’s major teaching hospital for women with high-risk pregnancies, including women carrying twins or triplets, as is the case for two of the authors of these open letters, who have granted RH Reality Check permission to publish them.

Three of the women mentioned are abortion activists with a pro-abortion organization, WV Free. Their open letters were sent specifically to Dr. Calhoun’s employers, none of whom have responded. Hopefully, this means they will refuse to fire someone simply for having beliefs that four women don’t like. But it wasn’t enough for these activists to protest his pro-life beliefs; they misrepresented the lawsuit of a woman who suffered a botched abortion in their attempt to get him fired as well:

As you know, Calhoun was the central figure in a politically-motivated lawsuit against Women’s Health Center. It is undisputed that Calhoun contacted his patient, Itai Gravely, one year after seeing her and advised her for the first time that he believed her abortion had been botched and that a fetal skull was left in her uterus. There is no medical evidence to corroborate Dr. Calhoun’s claim, which the Circuit Court of Kanawha County found to be particularly dubious given that Calhoun simultaneously referred Gravely to a lawyer for the political organization, the West Virginia Family Policy Council.

Calhoun went on to serve as an expert in the case, which was ultimately summarily dismissed. Calhoun’s involvement in the case highlights his obvious religious objections to comprehensive reproductive health care. He not only refuses to provide comprehensive care himself, but actively attacks other providers who do. However, it is most troubling that he was willing to manipulate his own patient into filing the frivolous suit. He made a patient a political pawn.

Of course, this letter, written by Margaret Chapman Pomponio, leaves out many of the facts of Gravely’s lawsuit. Gravely accused the abortionist of forcing her to continue with the abortion even though she told him she had changed her mind, saying that he instructed his assistants to hold her down while he killed her preborn child. When she told the abortionist, Rodney Lee Stephens (pictured right), that she was experiencing severe pain and heavy bleeding and could not drive herself to the hospital, he refused to help her. But these details are left out, because they don’t give the activists’ case against Dr. Calhoun any more leverage. Who cares if a woman was forced into an abortion that she didn’t want? There are pro-life doctors whose reputations need to be destroyed!

What this ultimately comes down to is proof that, as usual, so-called “pro-choicers” are looking to take away any vestige of actual choice surrounding abortion. Trying to force doctors into performing abortions against their will is just par for the course. If doctor dare to be openly pro-life, their reputations and livelihoods are fair game for attack. Of course, the reality is that the medical industry does not agree with these pro-abortion fanatics. Notorious late-term abortionist Susan Robinson has spoken out about how other doctors look down on them, how abortionists are seen as the “lowest of the low” and are frequently stigmatized. In addition to that, fewer and fewer medical students are choosing to learn how to perform abortions, leading to panic in the pro-abortion lobby. Their only choice is to attempt to bully doctors into submission, to scare them into abandoning their convictions and beliefs. And if the shoe was on the other foot – if pro-lifers were openly saying they could not feel comfortable seeing a doctor who performed abortions and were trying to get those doctors fired – these abortion activists would be howling with outrage. The hypocrisy and sheer audacity of these extremists, trying to destroy someone simply for having different beliefs than they do, is astounding.

But then, what else should we expect?