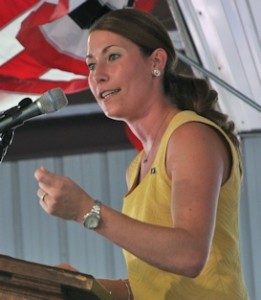 There has been some confusion recently regarding Kentucky U.S. Senate hopeful Alison Lundergan Grimes and her views on late-term abortion. Lundergan Grimes is endorsed by EMILY’s List, which “ignite[s] change by getting pro-choice Democratic women elected to office.” Karen Cross, the political director for National Right to Life, warns however, just how extreme EMILY’s List is:

EMILY’s List is a radical pro-abortion group which supports Democratic women candidates who support abortion on demand, partial-birth abortion and using your tax dollars to pay for abortion.

Where the confusion comes into play involves statements from Lundergan Grimes’ campaign saying that “Alison opposes late-term abortions.” The Weekly Standard reported in late April that despite this response, her campaign would not clarify further, particularly when it came to how she would vote on a 20-week ban.  In 2013, Lundergan Grimes told Howard Fineman “that she was pro-choice down the line on abortion.”   One could still be pro-choice and oppose aborting viable babies who can feel the pain of an abortion. It’s common sense. Those who oppose such a ban are the extreme ones, like EMILY’s List. Alison Lundergan Grimes possibly feared being at odds with the financially endowed organization which has endorsed her. It is sadly not all that surprising then that earlier this week, The Weekly Standard reported “Alison Lundergan Grimes Finally Admits She Opposes Ban on Aborting Viable Infants.” The Weekly Standard references an article from The National Journal  which includes a quote from the candidate herself on abortion.

Grimes supports abortion rights. “I come from a family of five women,” she says in the interview. “I would never pretend to tell one of my sisters what to do with their body and I don’t want the federal government doing that either.… When it comes to choice, I believe, should a woman have to make that decision, it’s between herself, her doctor, and her God.”

The statement is rather typical of the abortion supporting crowd. And like EMILY’s List, Lundergan Grimes doesn’t actually mention the horrific procedure of abortion, but rather talks about the bodies of the five women in her family. What is left out is that should one of her sisters were to become pregnant, is the body of Alison’s niece or nephew. So while Lundergan Grimes may be on the same page as EMILY’s List, she risks alienating 2/3 of Kentuckians, as 67% think that abortion should be illegal, according to a recent Marist poll. And it is quite ironic that “Alison Lundergan Grimes Is Talking A Lot About Her Gender” and about 53 percent of the electorate, when most Americans, including most women, support a ban on late-term abortion. Further problematic about this kind of a move is that Lundergan Grimes may  very well likely be trying to shy away from discussing abortion, as she knows it is a problematic issue for a conservative state as Kentucky, but won’t argue with an endorsement from EMILY’s List.