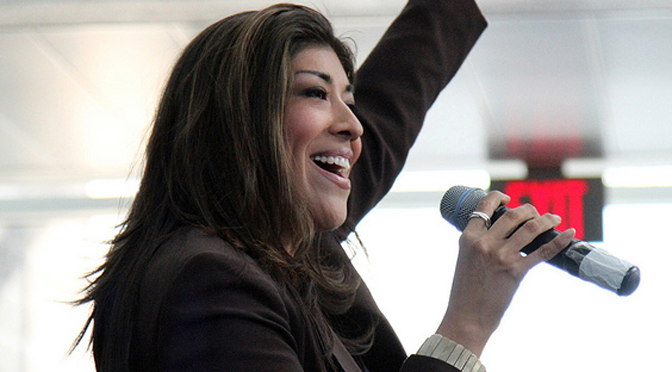 But standing with Planned Parenthood may not be as easy as they had hoped.

In an interview with journalist and host Jon Ralston, Lucy Flores, a Planned Parenthood-backed Democratic congressional candidate from Nevada, got a little taste of just how hard it might be to defend Planned Parenthood amid the repercussions of their illegal and disturbing actions.

Ralston plays a clip from a video released by the Center for Medical Progress, in which a former procurement technician describes the beating heart of an aborted baby. (Later in the video, we discover that the baby’s brain was subsequently harvested.) Ralston then asks Flores, “You can’t tell me you’re not disturbed by that?”

Predictably, Flores responds the way many pro-abortion radicals have: by ignoring the evidence against Planned Parenthood, instead turning to attack the makers of the videos. She claims the videos are part of a “smear campaign” and that they are “highly edited.” If only it were that easy to dismiss the evidence. Ralston quickly points out that the full videos have been posted online, rendering Flores’ remarks about the editing of the shorter clips void.

When you look at something like that and some of these other videos you know that they are selling body parts, they say not for a profit, you hear a woman talking about a beating heart, I don’t understand why that’s not disturbing to you, at all. Even if you’re fervently, like you are, pro-choice.

Flores, who made waves when she confessed, during a discussion on sex education, to having an abortion as a teen, responded in the most ridiculous way: “Of course they’re not selling body parts! When you say a ‘body part’ you think of a full arm or whatever the case may be.” She likens Planned Parenthood’s “donation” of human tissue to a skin graft.

I have no words to describe the silliness of Flores’s words, so I’ll just say this: If this is the best that extremist pro-abortion politicians can do to defend Planned Parenthood, they may be in for a very unpleasant election in 2016.