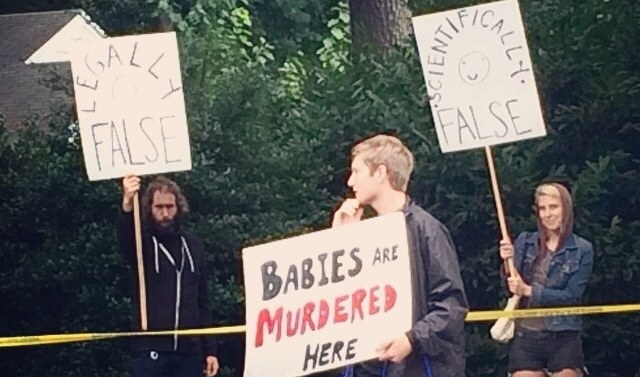 A pro-abortion “activists” couple thought they were cute when they decided to counter protest pro-lifers outside an abortion clinic in North Carolina. But all they were successful in showing was how ignorant about abortion and disconnected from reality they are.

The couple had been walking by this clinic and the pro-life activists for years when one day they decided to start counter protesting. Soon their efforts went viral as they posted pictures of themselves and their homemade signs on Tumblr. Suzanne Buckley, the Executive Director of the National Abortion and Reproductive Rights Action League North Carolina even emailed words of gratitude to them for brining humor to the sensitive topic of killing innocent people.

So how compelling are these signs that have gotten the pro-abortion movement all jazzed up?

Here are some examples:

Legally False. (In response to a pro-life sign that reads Babies are Murdered Here)

This is true. Legally, abortion is not murder. But let’s remember one other horrific crime that was once completely legal: slavery. Legality doesn’t make abortion right or justified and it definitely doesn’t mean that abortion is NOT the taking of an innocent life. It might not be classified as “murder” but it is still killing.

Scientifically False. (In response to a pro-life sign that reads Babies are Murdered Here)

They might want to brush up on their science. It is a well-known fact that while not labeled “babies” but rather “fetuses”, it is scientifically true that unborn human beings are alive. After all, they have a heartbeat. And if the heartbeat is how we decide if someone is alive or dead, wouldn’t the presence of one signify a life.

This is just hypocritical.

Yes, these are all signs that they clearly made just to get the right to life protestors worked up. All it does is show how pro-choicers don’t really see abortion as the delicate, serious, and difficult decision they claim to.

Anyone who says this is just misguided. To thank Planned Parenthood is to say, thanks for tricking our children, thanks for giving us false information, thanks for allowing child rapists to go back out and rape again, and thanks for killing women who come to you for help.

It’s all fun and games until a woman commits suicide because she can’t face the guilt and remorse she feels over having an abortion.

It doesn’t matter how much fun these pro-choicers are having with their 15 minutes of fame. They may feel like heroes for abortion, but if they ever had to witness an actual live abortion and see what happens, they’d probably be whistling a different tune.