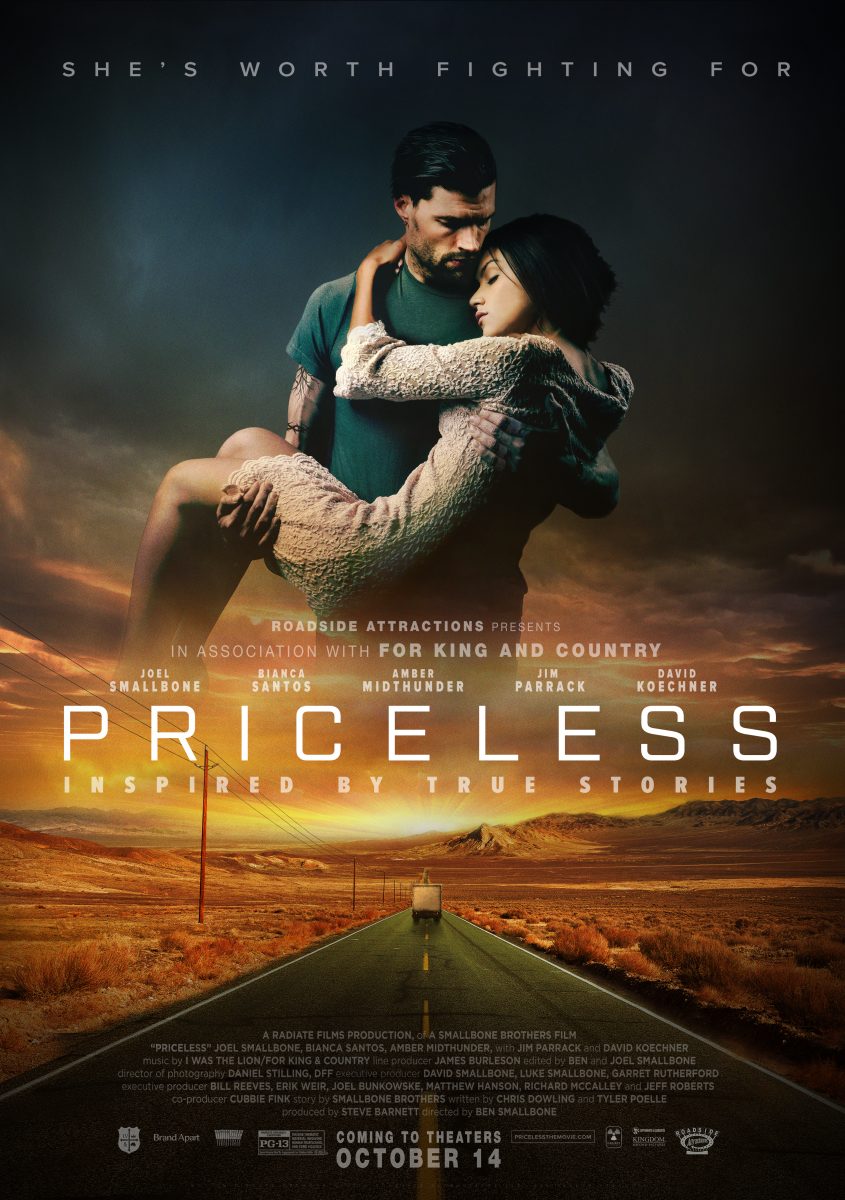 Priceless, a movie that shows the tragedy and toll of human sex trafficking, is coming to theaters today, October 14. The movie’s website summarizes the basic premise of the film:

Inspired by true events, PRICELESS is a powerful drama/thriller about James Stevens who was, at one time, a good man with a great life — but that was then and this is now. After the tragic death of his wife and losing custody of his little girl, James is at the darkest crossroad of his life. Angry, desperate, and unable to hold down a steady job, he agrees to drive a box truck on a shady, one-time trip cross country for cash — no questions asked. But when he discovers what he is delivering is actually who, he is compelled to save two beautiful and frightened sisters who are unaware of the danger that awaits them.

The film’s website also states that James, in a courageous decision to overcome his past, risks it all to save these women from a future in sex trafficking, and through it “ultimately discover[s] the life he was meant to live.”

Arina Grossu, Family Research Council’s Director of the Center for Human Dignity recounted how many girls who are trafficked are “either forced or coerced into having abortions, so that they can keep on bringing in the profit” for pimps. In a lecture given last summer at the Family Research Council she said:

Sexual exploitation is a $99 billion industry. Trafficking is highly profitable that’s why [women and girls] are forced to have sex so many times a day with these men and so pimps turn to abortion to keep victims working, and victims are often coerced or forced to abort. The abortion industry stands to make a profit from this – as they do from everything else – because for them, it’s money. Planned Parenthood and other abortion facilities are often complicit with sex trafficking.

In an article published in Charisma News, Robert Schwarzwalder writes how Planned Parenthood Federation of America, the nation’s largest abortion provider, has shown a willingness to aid and abet in this deviant, abusive enterprise.

After viewing the Planned Parenthood video my first thoughts were of the victims I have served over the last eight years. Specifically the women and girls—their horrendous statements of rape, gang rapes, torture, branding, starvation, extortions, assault and their reports of repeated forced abortions and miscarriages due to the trauma they received. I have often wondered where these multiple abortions took place and how medical professionals had not seen the extensive trauma to their bodies, spirits and souls.

Priceless is the first film from the Smallbone brothers (Joel, Luke, David, and Ben). Joel and Luke are the brothers behind the two-time Grammy Award-winning band For King & Country. Roadside Attractions will release the film in theaters nationwide today, October 14.

You can watch the official movie trailer here. Or find a theater near you and watch the movie as it premieres.