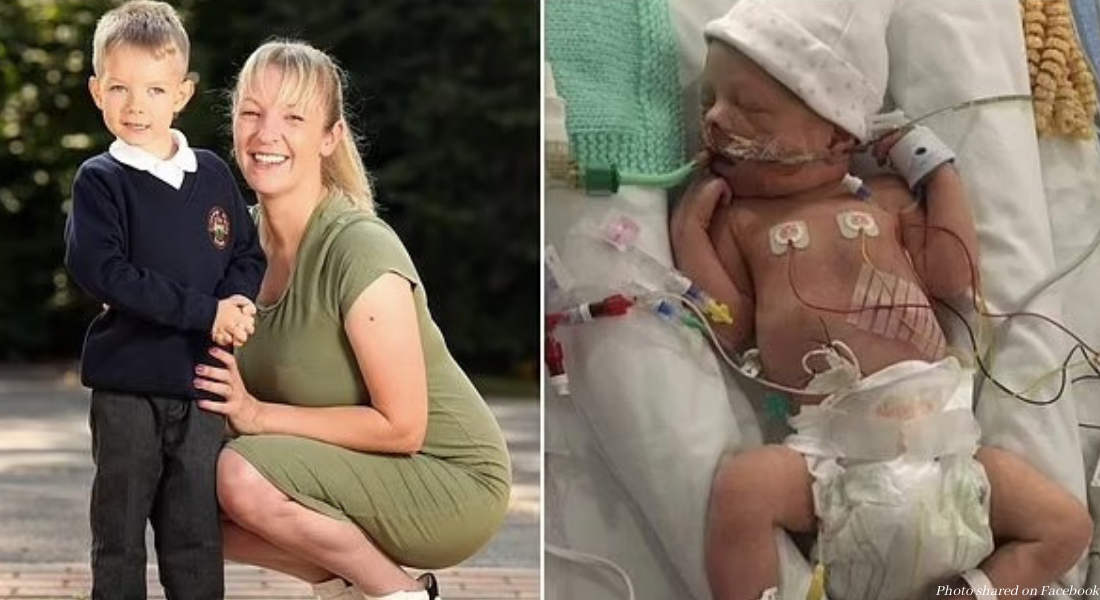 Sami Bates thought her family size was just right, so when she had to have surgery to remove precancerous cells on her cervix in 2013, she didn’t think she would get pregnant again. But in 2016, she was overjoyed to find she was unexpectedly going to have another baby. However, doctors repeatedly pressured her to have an abortion. She refused, and now her son is alive, thriving, and starting school.

Although Sami was thrilled to be pregnant, the way forward was bumpy. Not only did she have the looming threat of preterm labor after the previous surgery removed a large part of her cervix, but her 20-week ultrasound showed there were some problems with her growing baby.

“It looked like CCAM, or Congenital Cystic Adenomatoid malformation – micro cysts that grow instead of the lungs, which wasn’t great news,” said Sami, according to The Sun. “Then one doctor mentioned it could be CDH [Congenital Diaphragmatic Hernia], where a hole in the diaphragm results in the intestines, and sometimes the stomach, entering the chest cavity to limit lung growth. This would’ve been much worse than CCAM, and googling both, we were terrified.”

Two months later, a follow-up ultrasound revealed that her preborn baby did, indeed, have a pretty severe case of CDH. Doctors gave him a 15% chance of survival, and encouraged Sami and her husband Paul to abort him. The parents refused, saying, “we had to at least give him a chance.”

Sami’s pregnancy was closely monitored with appointments and ultrasounds every three weeks. At almost every appointment, doctors pressured her to abort her son, Davey. “It was as severe a case of CDH as the doctors had ever seen. It just seemed impossible he could survive outside of my womb, but we couldn’t live with ourselves if we didn’t at least give him a chance,” Sami told the Daily Mail.

All told, Sami was told an unconscionable five times to have an abortion.

Pressure to have an abortion in adverse circumstances has been widely reported by parents in the United Kingdom (UK), such that in late 2020 the Royal College of OB/GYNs had to release guidelines for medical professionals instructing them not to pressure parents after bioethics groups complained. In the United States, pressure to abort has also been reported, even when lab results turned out to be the result of a decimal error.

Currently in the UK, abortion is legal up to 24 weeks, or up until birth if the baby has a disability.

Sami was eventually induced when Davey was full-term. At birth, he weighed a healthy 5lbs 15oz, and at first, she was relieved to hear him cry. However, as she explained, “the nurses and doctors explained, in this case, it was the opposite. Taking air into his abdomen would crush his bowels and stomach and potentially cause serious damage.”

He was immediately ventilated to prevent further damage. Eventually, he had a complex surgery to move his organs back to their necessary places. Although the doctors gave him a 50-50 chance after surgery, Davey’s oxygen levels stabilized, and his condition continually improved.

The surgeons who cared for him were amazed at how well he did. “One of them turned to me and said: ‘We don’t know how he did it, but your little boy is a rock star!’”

Although they were told it would be more than a month after his surgery before he could return home, Davey did so well that Paul and Sami took him home just two weeks and six days after his birth. “We’d been told it would be a minimum of six weeks, so [we] were overjoyed. Davey slept and fed well, and hit the usual milestones – the pregnancy, being told to abort him five times, it just seemed like a bad dream.”

After two minor surgeries years later, Davey is a healthy boy, and Sami is proud to see him going off to school for the first time. “I’ll be the proudest mum on earth when I wave off our little ‘rock star’ at the school gates. I just need to remember to bring lots of tissues with me, because I’m not sure I’ll be able to hold it together!”